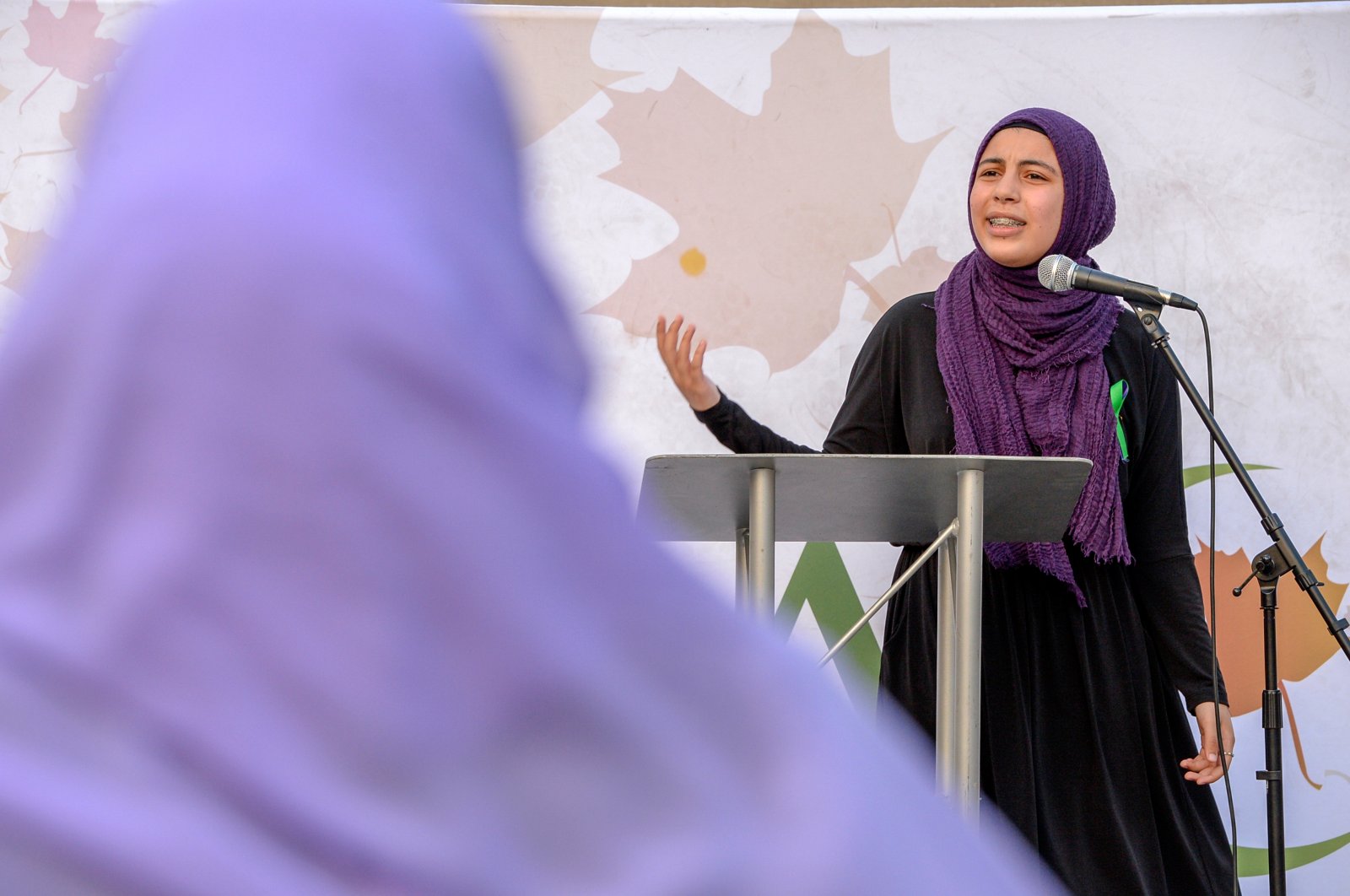 Ayah Elmallah recites one of her poems titled "Terror Is" at a rally to highlight Islamophobia, sponsored by the Muslim Association of Canada, including the June 6 in London, Ontario attack which killed a Muslim family in what police describe as a hate-motivated crime, in Toronto, Ontario, Canada, June 18, 2021. (Reuters Photo)
by Agencies Jun 25, 2021 1:04 pm
RECOMMENDED

Police are seeking a suspect who attacked two Muslim sisters in the western Canadian province of Alberta in what is being called a hate-motivated crime, local media reported Thursday.

According to the Royal Canadian Mounted Police, a man wearing a mask approached the women in St. Albert, shouting racial slurs and brandishing a knife. One sister was grabbed by her hijab and thrown to the ground, where she fell unconscious.

The second was also knocked to the ground and a knife was held at her throat while the suspect continued to yell racial slurs. He then ran away, police said. One of the sisters was taken to the hospital and both sustained non-life-threatening injuries.

A dog was brought in to track the suspect, but he escaped capture and is now being searched by the police.

"Our Muslim neighbors, friends and family deserve to feel safe and welcome in their communities," said St. Albert Mayor Cathy Heron, according to remarks carried by Anadolu Agency (AA). "I'm heartbroken that many of them are not feeling safe right now."

The man was described as being about 50 years old, 6 feet tall and wearing dark jeans, a navy shirt and a red and white bandana. The Edmonton area has been the scene of several hate-motivated attacks this year, including one where a woman in her 50s was out for a walk when she was grabbed from behind and thrown onto the pavement, reported CTV News.

In March, a man was charged after uttering slurs against a teenager wearing a hijab. St. Albert is a city of about 65,000 situated just 12 kilometers (7.45 miles) from Edmonton. Ironically, St. Albert was named by the MoneySense digital magazine as the best place to live in Canada in 2014.

Earlier in June, a man was arrested after killing four members of a Canadian Muslim family by running them over with his pickup truck. The 20-year-old suspect has been charged with four counts of first-degree murder and one count of attempted murder, while several leaders of the Muslim community have called on the courts to classify the episode as an act of terrorism.

The attack occurred as five family members were walking together along a sidewalk when a black pickup truck "mounted the curb and struck" them as they waited to cross the intersection, according to police. The Muslim Association of Canada has called on authorities to "prosecute this horrific attack as an act of hate and terrorism," as reported by Agence France-Presse (AFP).