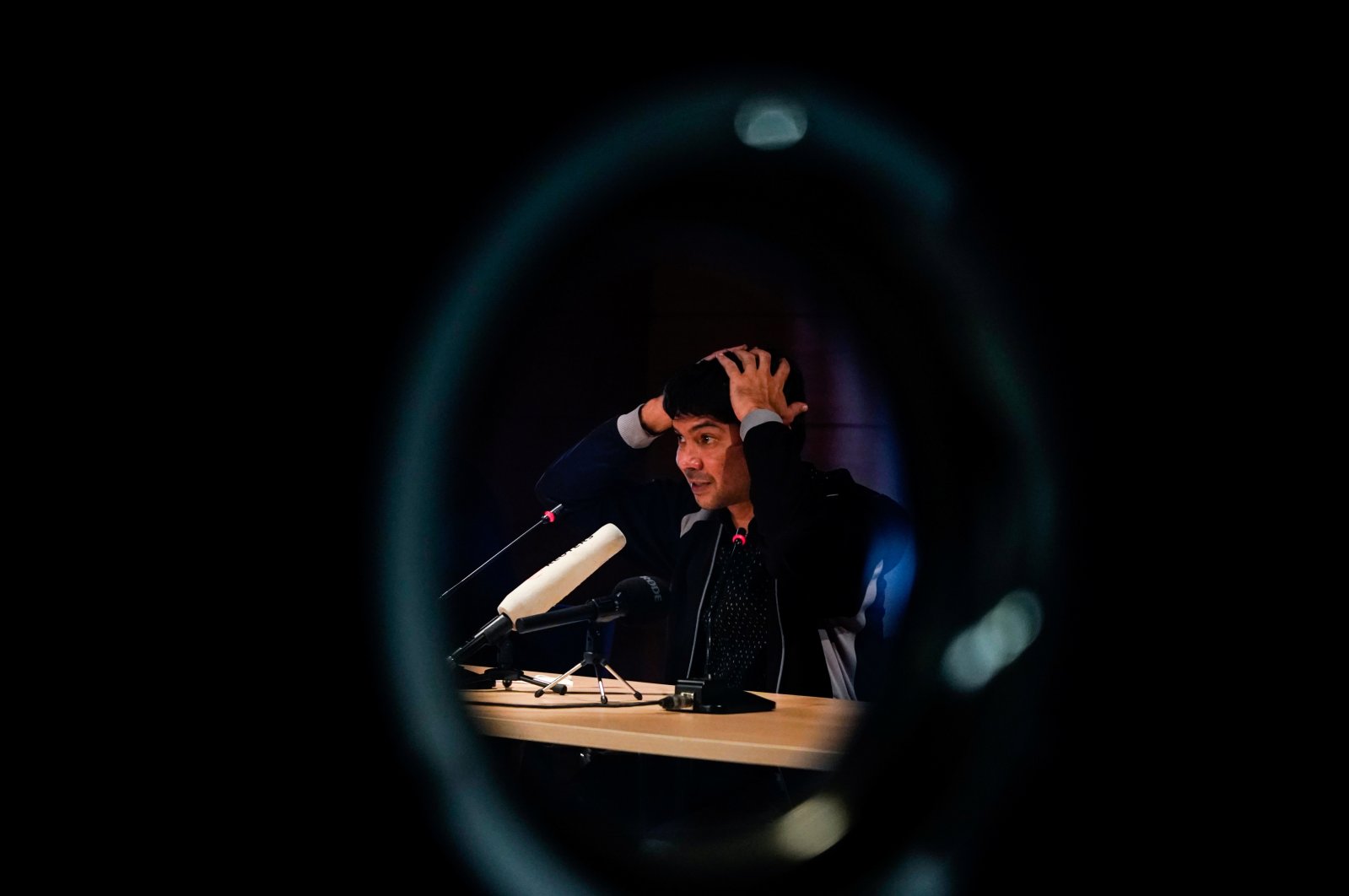 Cuban protest leader Yunior Garcia gestures as he attends a news conference after he and his wife landed at Madrid's Barajas airport on Wednesday afternoon, in Madrid, Spain, Nov. 18. (REUTERS/Juan Medina)
by Daily Sabah with AFP Nov 18, 2021 6:29 pm
RECOMMENDED

Cuba is a country famous for its exiles and revolutionaries, its artistic bravado and mortal stubbornness. The tradition of its revolutionary artists being forced into exile has been expanded, with leading Cuban protest leader Yunior Garcia acknowledging on Thursday that his flight to Spain following pressure from the island's communist regime was a "painful blow" to the opposition movement.

Garcia, who arrived unexpectedly in Madrid on Wednesday with his activist wife on a tourist visa, said he has no intention to seek asylum in Spain, and had left Cuba because he faced a "living death" there.

The 39-year-old actor and playwright is the founder of online discussion group Archipelago which had called for protests on Monday in Cuba that were blocked by the Cuban government.

The dream of change

2021 marked the end of more than 60 years of rule by the Castro brothers, first Fidel and then Raul. When Miguel Diaz-Canel took the helm as Cuba's leader and head of its ruling communist party, the long pessimistic island had a brief moment of hope.

He was called a reformer and a moderate, the man who could update Cuba's communism to the 21st century. When thousands of protesters took to the streets over the summer to demand food, medicine and liberty, the world watched anxiously, hoping that ephemeral dream of change under Cuba's ossified regime could be achieved.

But this soon proved to be a nightmare, and business went back to usual as the regime cracked down, stifling protest and punishing those who dared to take a stand.

The first meaningful anti-government demonstration in years was a minor revolution of artists, many of whom using social media to unite dissent and transform discontent into action. While the opposition was never a unified front, it's aims were hardly earth shattering: all they wanted was room to breath, and an end to the strangulation of civil society which began soon after Fidel Castro and his bearded revolutionaries seized power in 1959.

"I understand that it was a painful blow," Garcia told a news conference in Madrid when asked about the disappointment expressed by other Cuban dissidents over his abrupt departure from the island which has been under embargo by the United States for more than half a century.

"I will eventually forgive myself, perhaps for not having had the courage to turn myself to stone or become a bronze statute," he added.

"Maybe I ask forgiveness for being human, for thinking about my wife and my life, and for escaping what was surely going to be a living death, because that is what awaited me in Cuba."

The white rose of resistance

Garcia has been the target of a relentless weeks-long campaign to discredit him in Cuban state media and pro-government blogs after Archipelago notified the authorities of the planned march.

He attempted to march alone on Sunday but was prevented from leaving his apartment after police and government supporters surrounded the building.

When he tried to communicate with journalists and others by displaying a white rose at his window, people standing on the roof unfurled a huge Cuban flag to cover the window.

Government critics, many of them young artists and intellectuals sidelined by the regime, sought to revitalize the popular mobilization that erupted into country-wide protests over the summer. But the ever-present repression of the regime, including uniformed police officers, plainclothes state security agents and government supporters, was enough to dissuade a repeat of last July.

Yoani Sánchez, a blogger and activist, said in a report by the New York Times that the show of force illustrated how frightened the Cuban government was of people demanding freedom of expression. But she questioned whether the government could continue to dedicate extensive resources on street corners across the country.

“Fear changed sides,” Ms. Sánchez said during her morning podcast. “How? Cuban officials have deployed an intense campaign of threats, surveillance and cuts to the internet that demonstrate only one thing, ladies and gentlemen: the terror, the panic, they have of losing power.”

Garcia told the Madrid news conference that his entire family had been "harassed" by the communist regime and it's supporters, his wife told she would lose her teaching post and that two decapitated pigeons were left outside his house.

"It was something orchestrated by state security forces" to scare us he said, adding he plans to return to Cuba with his wife once there lives there are no longer "in danger."

Born in the eastern city of Holguin, Garcia was long known only in the arts world – for his plays, as well as his television and movie scripts.

Cuban authorities have accused Garcia, without proof, of being paid by the United States as part of a plot to destabilize the country, a charge he denies.