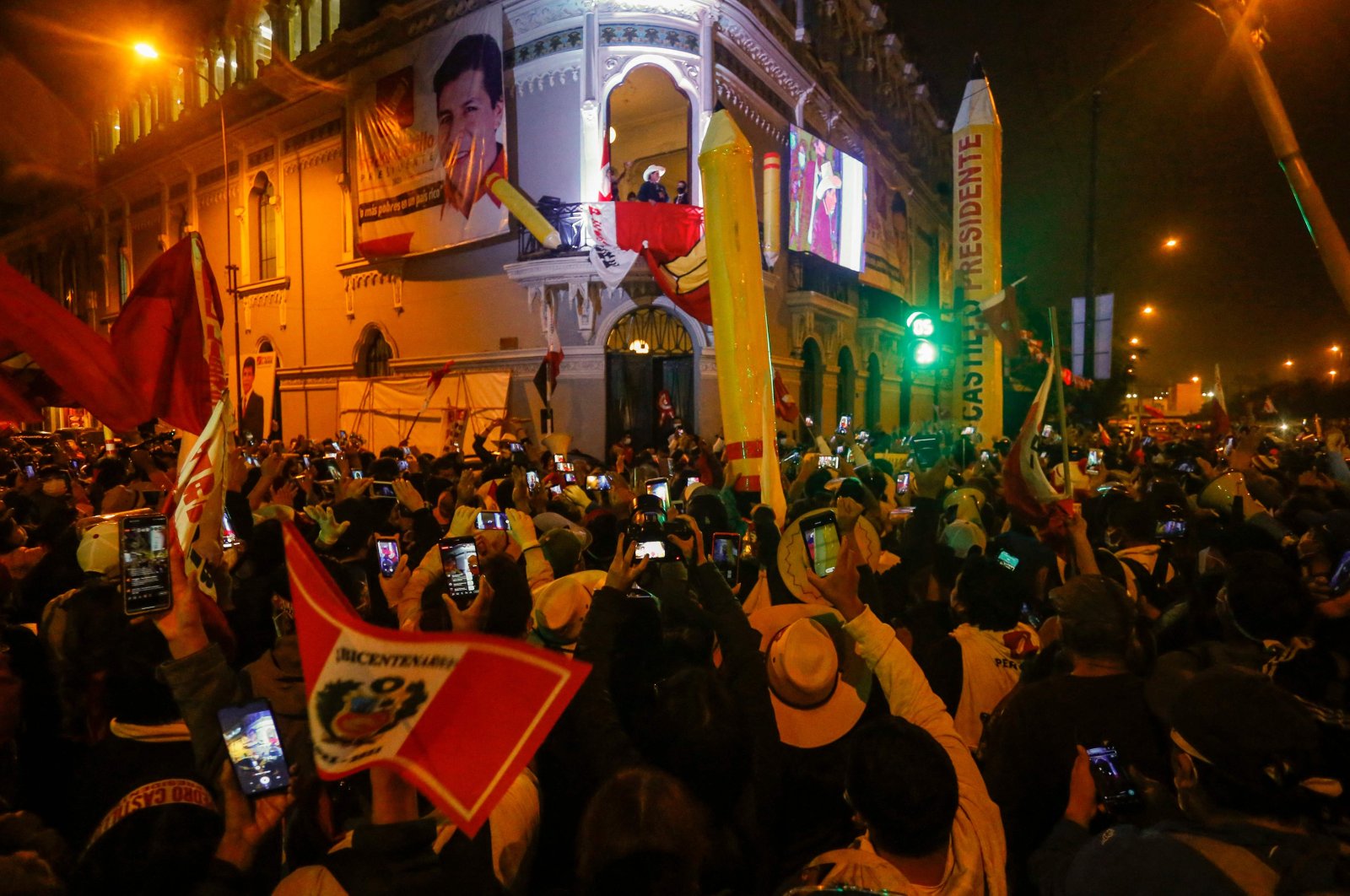 Peru's left-wing presidential candidate Pedro Castillo of the Peru Libre party gestures as he speaks to his supporters from the balcony of his party headquarters, Lima, Peru, June 10, 2021. (AFP Photo)
by French Press Agency - AFP Jun 12, 2021 9:37 am
RECOMMENDED

International election monitors said Friday that Peru's disputed presidential vote had not shown any "serious irregularities," as the country's interim leader called for calm after five days of rising tensions without a result from the cliffhanger poll.

Right-wing candidate Keiko Fujimori risks imminent trial on corruption charges if she loses to her leftist rival Pedro Castillo, who has already cast himself as the victor.

Fujimori has claimed fraud and election authorities are reviewing her request to annul around 200,000 votes, in a process expected to take several more days.

An election observation mission from the Organization of American States said it had "observed a positive electoral process" and cast doubt on the rigging claims, but called on authorities to wait until challenges to the vote had been resolved before calling a winner.

Tensions have risen in the days since the vote as supporters of both Castillo and Fujimori have rallied to call for their candidate to be anointed president.

Peru's caretaker leader Francisco Sagasti moved Friday "to keep the country calm in difficult times. In that effort, I got in touch with several people who ... have contact with both candidates."

"My request was the same for both: lower the tension and wait for the official results," he tweeted.

Peruvians voted Sunday for their fifth president in three years after a series of crises and corruption scandals saw three different leaders in office in a single week last November, the last one being Sagasti.

Seven of the country's last 10 leaders have either been convicted or are under investigation for graft.

On the last count of Sunday's runoff, rural school teacher and trade unionist Castillo led with 50.1% of the ballots compared to Fujimori's 49.8%.

Castillo was ahead by some 60,000 votes, but if Fujimori's challenge to the disputed ballots is accepted, she could be declared the winner and so delay a corruption trial until the end of her term.

Prosecutors have said they would seek a 30-year jail term for Fujimori on charges of taking money from scandal-tainted Brazilian construction giant Odebrecht to fund failed presidential bids in 2011 and 2016.

The 46-year-old denies the allegations. She has already spent 16 months in pre-trial detention.

On Thursday, a prosecutor sought preventive custody for Fujimori, claiming she had violated her parole conditions by meeting with a witness in the case. A decision is pending.

The messages prompted the Peruvian government "to deliver a note of protest to the ambassadors of those countries in Peru, indicating that the final results of the 2021 general elections have not yet been officially announced by the electoral authorities," the foreign ministry in Lima said in a statement Friday.

As in Peru's three previous presidential elections, the tail-end of vote counting has been slow due to delays in delivering ballots from rural and jungle areas, and from abroad – where one million of the country's 25 million eligible voters live.

Whoever wins will lead a nation battered by recession and the world's highest coronavirus death rate, with more than 187,000 deaths among its 33 million population.

Two million Peruvians lost their jobs during the pandemic and nearly a third now live in poverty, official figures show.

On the campaign trail, Castillo said Peru's mining, oil and gas resources "must be nationalized" as he vowed to raise taxes and increase state regulation.

Free-market defender Fujimori has sought to portray Castillo as a communist who would turn Peru into a new Venezuela or North Korea.

On Friday, Castillo's economic advisor Pedro Francke told Agence France-Presse (AFP) that the candidate's program was "nothing" like" that of Venezuela.

There was, however, a need for "higher taxes on big companies and mines," he said.