UN sounds alarm over use of excessive force in Cuba unrest 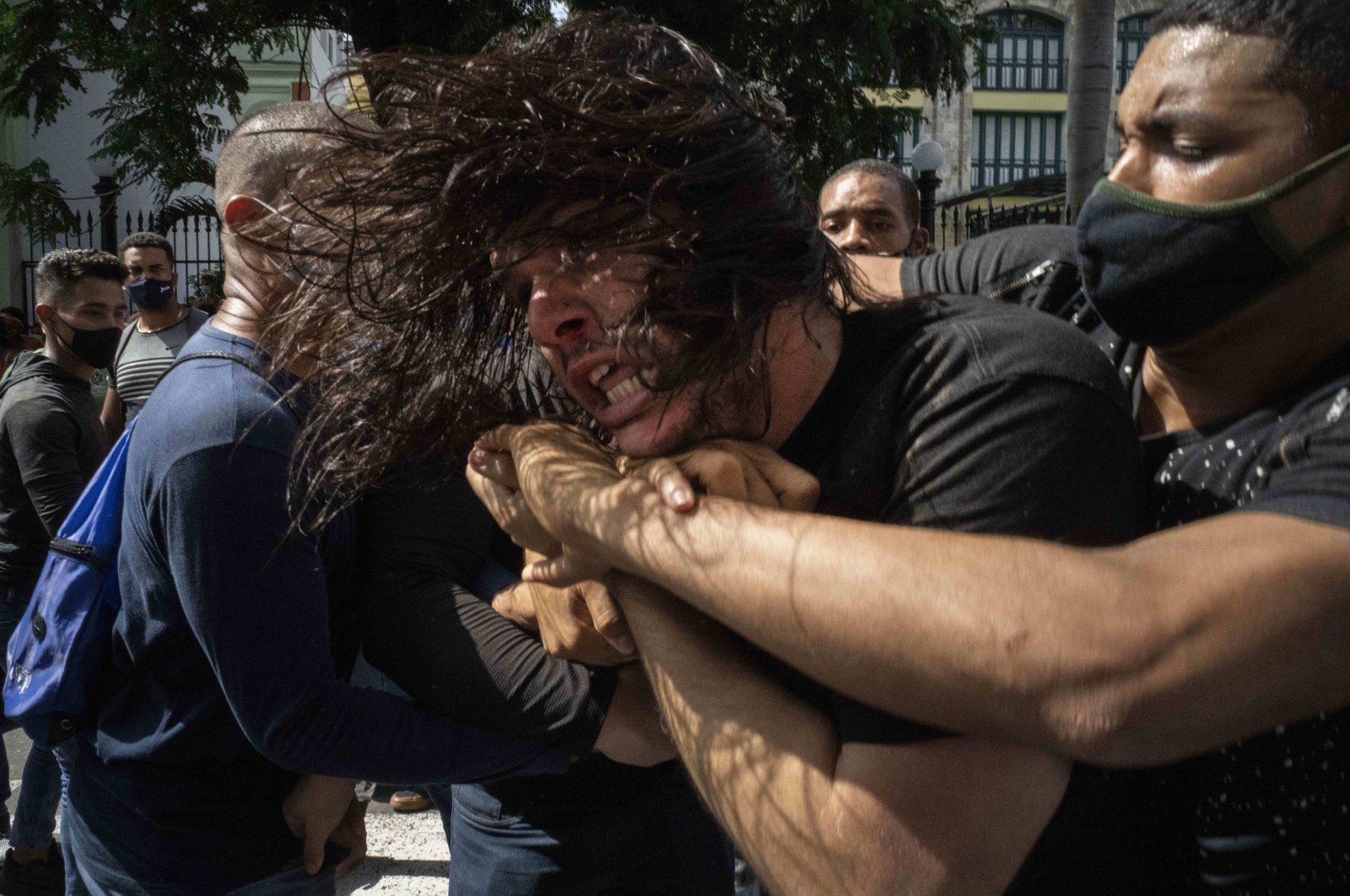 Plainclothes police detain an anti-government protester during a demonstration over high prices, food shortages and power outages, while some people also called for a change in the government, in Havana, Cuba, July 11, 2021. (AP Photo)
by French Press Agency - AFP Jul 16, 2021 11:10 am
RECOMMENDED

The United Nations human rights chief expressed concerns Friday over the alleged use of excessive force during unprecedented anti-government demonstrations in Cuba, demanding that all those detained simply for protesting be freed.

Michelle Bachelet urged the government to address the protesters' grievances and also called for the lifting of sanctions against the island. One person has died and at least 100 people have reportedly been arrested since massive protests erupted across Cuba on Sunday.

"I am very concerned at the alleged use of excessive force against demonstrators in Cuba and the arrest of a large number of people, including several journalists," Bachelet said in a statement. "It is particularly worrying that these include individuals allegedly held incommunicado and people whose whereabouts are unknown," she said, stressing that "all those detained for exercising their rights must be promptly released."

The rallies are the largest since the Cuban Revolution of the 1950s and come as the country endures its worst economic crisis in 30 years, with chronic shortages of electricity, food and medicine, just as it records a spike in coronavirus infections.

Cuba's San Isidro free speech protest movement published late Monday a list of 144 people held or reported as disappeared following the demonstrations in dozens of cities and towns. A 36-year-old man died during a protest on the outskirts of Havana on Monday, the interior ministry said Tuesday.

"I deeply regret the death of one protester in the context of protests in Havana," Bachelet said. "It is important that there be an independent, transparent, effective investigation, and that those responsible are held accountable."

She also urged Cuban authorities to ensure internet access is fully restored, after it was cut for several days earlier this week.

The U.N. rights chief pointed to the difficult economic context of the demonstrations, with protesters demanding the lifting of economic measures that have restricted access to food, medicines and COVID-19 vaccines.

"I urge the Government to address the protesters' grievances through dialogue, and to respect and fully protect the rights of all individuals to peaceful assembly and to freedom of opinion and expression," she said.

Havana, under U.S. sanctions since 1962, has blamed the show of discontent on Washington pursuing a "policy of economic suffocation to provoke social unrest."

In her statement, Bachelet reiterated her call for the lifting of unilateral sanctions on the country, "given their negative impact on human rights, including the right to health."

Cuban President Miguel Diaz-Canel admitted for the first time that part of the fault for this week's protests in the island nation lies with the government's shortcomings in handling shortages and other issues. But in a televised address Wednesday night he also called on Cubans to not act with hate – a reference to the violence that occurred at some of the rare street demonstrations in which protesters voiced grievances over high prices, food shortages and power outages, while some people also called for a change in the government.