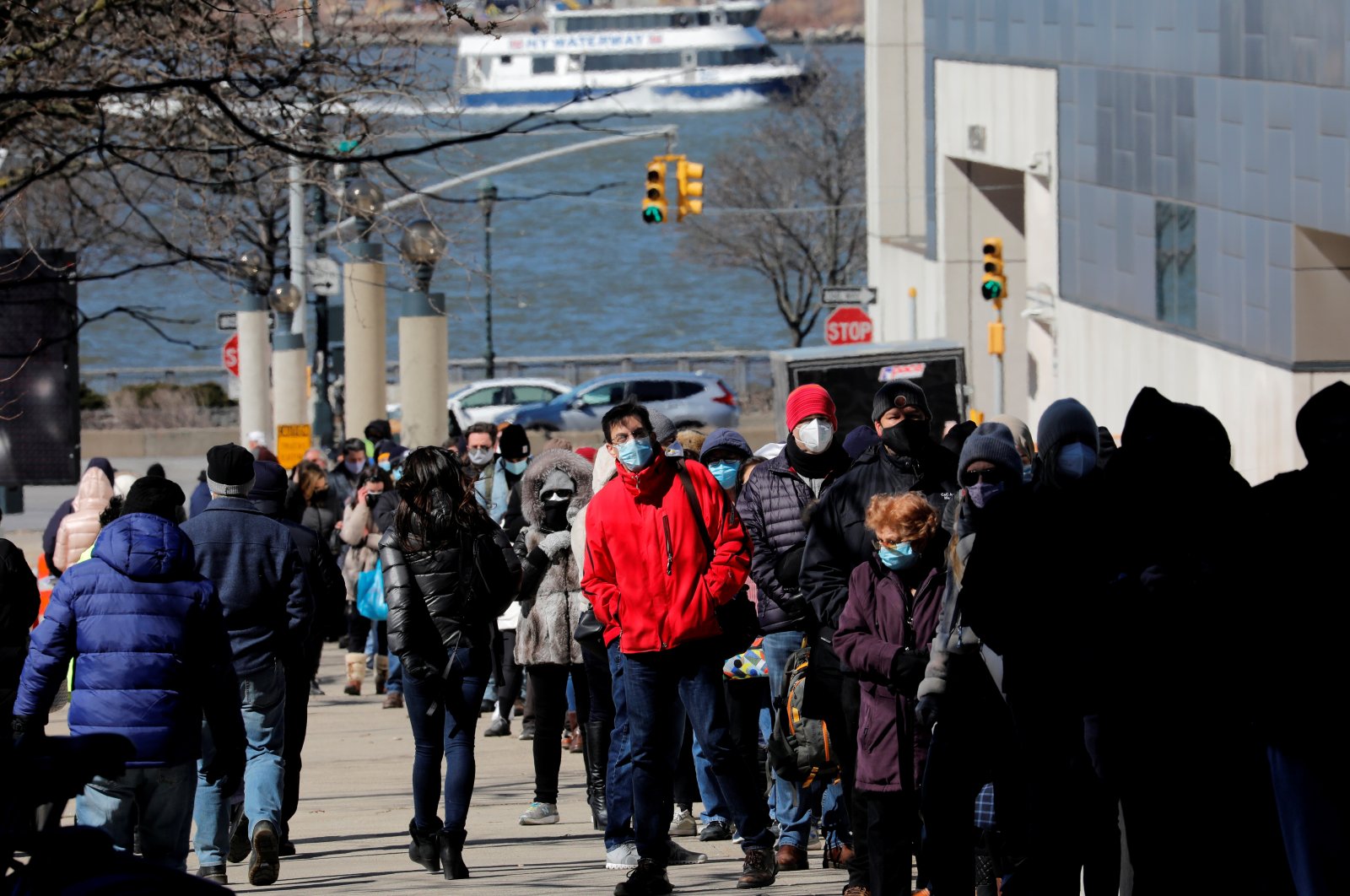 People wait in a line stretching around the Jacob K. Javits Convention Center on midtown Manhattan's west side, to receive a coronavirus vaccine at the site which has been converted into a mass vaccination center in New York City, New York, U.S., March 2, 2021. (Reuters Photo)
by DAILY SABAH WITH AGENCIES Mar 03, 2021 12:40 pm

U.S. President Joe Biden has pledged to provide coronavirus inoculations to all adults in the country by the end of May as states across the nation are moving to relax virus-related restrictions, while Brazil reports a record 1,600 daily fatalities

The United States will have enough coronavirus vaccines for its adult population by the end of spring, while Brazil's troubles deepened as it registered its highest 24-hour death toll. The two countries have the largest number of deaths in the world, with 515,000 COVID-19 fatalities in the U.S. and 255,000 in Brazil, with both dealing with the cost of mixed public health advice on masks and other measures.

U.S. President Joe Biden said Tuesday the nation expects to take have enough vaccines for all adults by the end of May, two months earlier than anticipated, and pushed states to get at least one shot into the arms of teachers by the end of March to hasten school reopenings.

“We’re now on track to have enough vaccine supply for every adult in America by the end of May,” Biden said, according to a release in quotes carried by The Associated Press (AP).

Despite the stepped-up pace of vaccine production, the work of inoculating Americans could extend well into the summer, officials said, depending both on the government’s capacity to deliver doses and Americans’ willingness to roll up their sleeves.

Biden’s announcements quickly raised expectations for when the nation could safely emerge from the pandemic with the promise of speedier vaccinations, but even as he expressed optimism, Biden quickly tempered the outlook for a return to life as it was before the virus hit.

“I’ve been cautioned not to give an answer to that because we don’t know for sure,” Biden said, before saying his hope for a return to normal was sometime before “this time next year.”

As Biden spoke, states across the country were moving to relax virus-related restrictions despite the objections of the White House and the nation’s top infectious disease expert, Dr. Anthony Fauci, who has warned against any relaxation of virus protocols until more Americans are vaccinated. The governors of Michigan, Mississippi and Louisiana likewise eased up on bars, restaurants and other businesses Tuesday, as did the mayor of San Francisco.

“Removing statewide mandates does not end personal responsibility,” said Texas Governor Greg Abbott, speaking from a crowded dining room where many of those surrounding him were not wearing masks. “It’s just that now state mandates are no longer needed.”

A year into the crisis, politicians and ordinary Americans alike have grown tired of rules meant to stem the spread of the coronavirus, which has killed over half a million people in the United States. Some places are lifting infection control measures and in other places, people are ignoring them.

Top health officials, including the head of the Centers for Disease Control and Prevention (CDC), have responded by begging people repeatedly not to risk another deadly wave of contagion just when the nation is making progress in vaccinating people and victory over the outbreak is in sight.

U.S. cases have plunged more than 70% over the past two months from an average of nearly 250,000 new infections a day, while average deaths per day have plummeted about 40% since mid-January.

But the two curves have leveled off abruptly in the past several days and have even risen slightly, and the numbers are still running at alarmingly high levels, with an average of about 2,000 deaths and 68,000 cases per day. Health officials are increasingly worried about virus mutations.

“We stand to completely lose the hard-earned ground we have gained,” CDC director Dr. Rochelle Walensky warned on Monday.

Even so, many Americans are sick of the shutdowns that have damaged their livelihoods and are eager to socialize again.

An Indianapolis-area bar was filled with maskless patrons over the weekend. In Southern California, people waited in lines that snaked through a parking lot on a recent weekday afternoon for the chance to shop and eat at Downtown Disney, part of Disneyland. And Florida is getting ready to welcome students on spring break.

In San Francisco, an upbeat Mayor London Breed announced that California gave the green light to indoor dining and the reopening of movie theaters and gyms.

“You can enjoy your city, right here, right now,” she said from Fisherman’s Wharf, one of the city’s biggest tourist attractions. She added, “We are not where we need to be yet, but we’re getting there, San Francisco.”

Mississippi Governor Tate Reeves said he is getting rid of most mask mandates and lifting most other restrictions, including limits on seating in restaurants, starting Wednesday.

“The governor’s office is getting out of the business of telling people what they can and cannot do,” the Republican said.

Florida, which is getting ready for spring break travelers to flock to its sunny beaches, is considered to be in an “active outbreak,” along with Texas, Connecticut, Delaware, Georgia, New Jersey, New York, Rhode Island and South Carolina, according to the data-tracking website CovidActNow.

Meanwhile, the scale of the challenge confronting Brazil was highlighted on Tuesday when it registered a record 1,641 COVID-19 deaths in 24 hours. Brazil has had a piecemeal pandemic response, with individual cities and states setting their own policies in the face of far-right President Jair Bolsonaro's repeated attacks on restrictive measures and face masks. Several cities and states last week began imposing a new round of restrictions in a bid to avoid overwhelming their already stretched hospitals. The country began vaccinating in mid-January but is far off-pace to meet a government pledge of immunizing the entire population by the end of the year.

Around 10.6 million people in the country of 212 million have been diagnosed with COVID-19 since the pandemic began in China, according to the Health Ministry. Another 59,925 new virus cases were reported on Tuesday.

Cities and states in Brazil started implementing new restrictions in an effort to avoid overwhelming their already overcrowded hospitals. Rio de Janeiro's mayor and governors are “extremely worried” about the surge in the COVID-19 cases and the situation is “getting out of control," according to Doha-based media outlet Al-Jazeera

It said that Bolsonaro’s ongoing clashes with state and city officials had contributed to the lack of a unified response to the pandemic.

“Every day more scary and desperate,” the report said.

In Europe, the European Medicines Agency (EMA) said Tuesday that it is set to decide whether to authorize Johnson & Johnson's single-shot vaccine for the European Union on March 11. If approved by the Amsterdam-based regulator, the vaccine would be the fourth to get the green light for the 27-nation bloc, in a boost for its slow-starting vaccination program. Elsewhere, millions of coronavirus shots from the global COVAX scheme arrived in Nigeria, the Democratic Republic of Congo (DRC) and Angola on Tuesday, as African countries ramped up their vaccine rollouts.

While Africa's most populous country Nigeria received almost 4 million jabs, the DRC got 1.7 million doses, Angola welcomed more than 600,000 doses and Gambia was expected to take roughly 30,000, as Agence France-Presse (AFP) reported. Last week, Ghana and Ivory Coast were the first African countries to receive vaccines from COVAX, which is aiming to supply 2 billion doses by the end of the year.

Richer countries have surged ahead with vaccinations, but many poorer countries are awaiting deliveries, prompting the World Health Organization (WHO) to warn that the crisis cannot end unless everyone can inoculate their populations.

The COVAX facility, run by the WHO along with health nongovernmental organizations (NGOs), is aiming to supply vaccines to dozens of countries in the first 100 days of 2021. However, there are still critical hurdles for the rollout in vast African countries with sketchy infrastructure and an array of security challenges – a point addressed by Faisal Shuaib, director of Nigeria's primary health care agency.

"States without a functional airport will have their vaccines transported by road using vans with fitted cold cabins, from the nearest airport," he said.

He called the delivery – which arrived around noon in the capital Abuja – a "good day for Nigeria" and promised the rollout would begin in earnest on Friday, with frontline health workers the first to be inoculated.

COVAX, an initiative led by Gavi the Vaccine Alliance, the WHO and the Coalition for Epidemic Preparedness Innovations (CEPI) with UNICEF as implementing partner, is aiming to deliver 237 million AstraZeneca doses by the end of May.