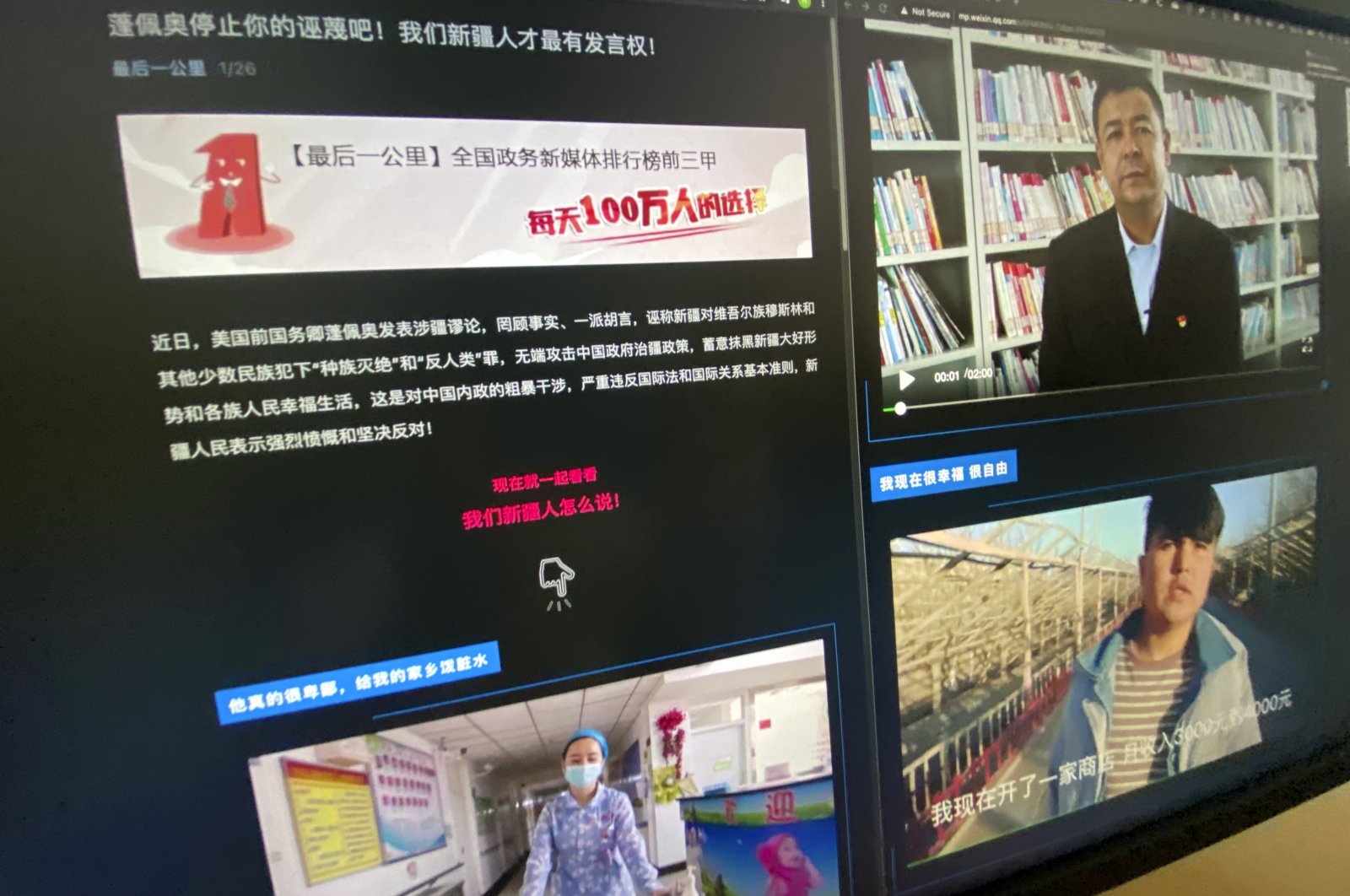 A webpage with the title "Pompeo stop your slanders! Only we Xinjiang people have a say!" and videos of ethnic Uyghurs responding to former U.S. Secretary of State Mike Pompeo are displayed on a computer screen in Beijing, China, May 19, 2021. (AP Photo)
by ASSOCIATED PRESS May 20, 2021 12:03 pm
RECOMMENDED

Beijing may be coercing Uyghurs to participate in videos in which they criticize and deny accusations of human rights abuses by China in the Xinjiang region, a text acquired by the Associated Press (AP) suggests.

The videos, which officials have insisted are spontaneous outpourings of emotion, have also featured prominently in a series of government news conferences held for foreign media. But the text obtained by AP is the first concrete confirmation that the videos are anything but grassroots.

Sent in January to government offices in the northern city of Karamay, the text told each office to find one Uyghur fluent in Mandarin to film a one-minute video in response to Pompeo’s "anti-China remarks.”

"Express a clear position on Pompeo’s remarks, for example: I firmly oppose Pompeo’s anti-Chinese remarks, and I am very angry about them,” the text said. "Express your feelings of loving the party, the country and Xinjiang (I am Chinese, I love my motherland, I am happy at work and in life and so on).”

While it’s not impossible to believe officials were able to find Uyghurs willing to be in such a public relations campaign, China’s track record in Xinjiang and its documented abuses of Uyghurs have led many experts to conclude it's more likely those in the videos were forced to take part.

"There’s something instinctive about these videos which feels ingenuine, but the significance is that there’s hard evidence here that the Chinese government is requesting these kinds of videos,” said Albert Zhang, a researcher at the Australian Strategic Policy Institute who recently co-authored a report on Beijing’s disinformation campaign on Xinjiang. Xinjiang spokesperson Xu Guixiang did not directly deny the authenticity of the text, but said it didn’t follow the usual format of state orders and that his understanding was that "the government has never issued this kind of notice or made this kind of request.”

He suggested the videos were made voluntarily.

"This didn’t require government organization. Many among the masses made this totally spontaneously,” Xu said in a recent interview. "Pompeo’s anti-China remarks arose the intense resentment of various ethnic groups in Xinjiang.”

Beijing is increasingly under fire for its campaign of mass detention, cultural destruction and forced assimilation of Uyghurs and other largely Muslim minorities native to Xinjiang. Western governments have levied sanctions against top Chinese officials, while the U.S. government has banned imports of cotton and tomatoes from Xinjiang, citing concerns over forced labor.

Tahir Imin, a Uyghur activist who fled China in 2017, said the videos are almost certainly state-orchestrated and coerced, given that information in Xinjiang is heavily censored. "People don’t know who Pompeo is or what he’s saying,” Imin said. "How would they know what Mike Pompeo is saying about the Uyghurs?”

The AP was unable to authenticate the text independently but friends of Firdavs Drinov, the man who sent a screenshot of the text to the AP, said he had obtained it from a friend with family working for the Karamay government.

Three days after he sent it, police detained Drinov and the friend after holding a special meeting on how to punish him, two other friends said. In a fax, the Xinjiang government confirmed that Drinov had been arrested, saying he was suspected of "fabricating and posting fake information” and "poisoning and bewitching ignorant groups and instigating splittism.”

Referring to Drinov by his legal Mandarin name, Chen Haoyu, it said he is awaiting trial in a detention center and that his "rights will be protected according to the law.”

The fax did not answer a question about whether Drinov’s detention was linked to the screenshot. His friend Vincent Gao called the charges nonsense, saying Drinov, who is biracial, opposed Xinjiang independence and believed in friendship between Uyghurs and Han Chinese, the country’s dominant ethnic group. Gao added that Drinov is very wary of fanatic extremism.

"He’s never said or done anything to split the country,” said Gao, a PhD student in Italian at Yale University in the U.S. "He was very proud of his Han heritage. There is no rational reason why he would support separatism.” Drinov is a linguist who harbored dreams of obtaining a doctorate in the United States despite never having gone to college. Fluent in Mandarin, English, Uzbek, Uyghur, Russian and French, he had at one point trained to represent China at the International Linguistics Olympiad in 2015.

Drinov maintained an open presence on Western social media platforms banned in China such as Facebook, Twitter and WhatsApp. He had run into trouble with authorities before. In December 2019, he was put in a detention center for 15 days for "picking quarrels and provoking trouble,” a vague charge often used against people the ruling Communist Party sees as threatening.

Police grilled him after he posted internal documents about the government’s crackdown in Xinjiang from a New York Times story on one of his Chinese social media accounts, according to texts he sent to Wang Tonghe, a computational linguist who befriended Drinov online.

Experts say the videos of supportive Uyghurs ordered up by authorities are part of a broader state-coordinated disinformation campaign aimed at whitewashing their policies in Xinjiang. Dozens of new Twitter and Tiktok accounts promoting those policies have cropped up. Some purport to be run by Uyghurs from Xinjiang, even though merely downloading those apps has landed others in detention.

The accounts share videos promoting Xinjiang’s lush landscapes and snow-capped mountains, depicting an idyllic, carefree life at total odds with accounts from hundreds of Uyghurs and Kazakhs who have fled the region in recent years. Zhang’s Australian Strategic Policy Institute report traced some of the social media videos to a company funded by the Xinjiang government.

It found that many of the accounts were likely to be inauthentic and state-linked, though it could not prove so definitively. "I think it’s interesting, the amount of resources the Chinese government is willing to use to produce this content and disseminate it,” Zhang said. "The scale and the persistence of it is new and sort of concerning.” Many of the glowing Uyghur social media posts have been shared by a slew of new accounts opened by Chinese officials and state media outlets in recent years.

China has had a much different reaction to scholars and activists using social media to research or speak out against the situation in Xinjiang. Nyrola Elimä, a Uyghur living in Sweden, said that after she started tweeting about the detention of her cousin, police pounded on her mother’s door in Xinjiang clutching printouts of her tweets. "Make your daughter delete these,” they said, threatening to detain her if Elimä didn’t comply.

In March, Beijing sanctioned British Uyghur specialist Joanne Smith Finley after she repeatedly characterized the Chinese government’s actions in Xinjiang as genocide, first doing so in an AP story about forced birth control measures. Finley responded to the sanctions on Twitter, "I have no regrets for speaking out, and I will not be silenced.”