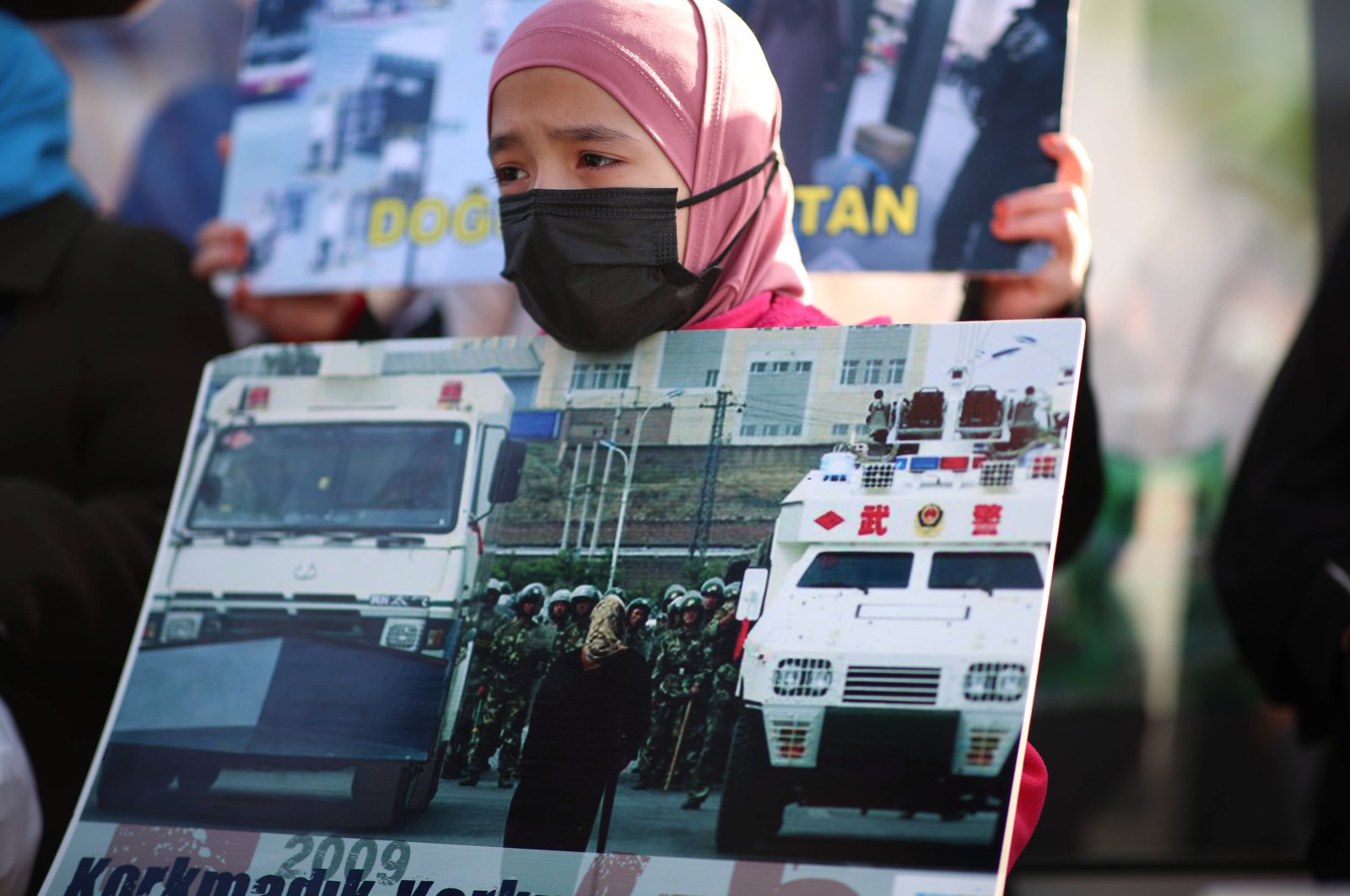 Uyghur protestors who have not heard from their families living in East Turkestan hold placards and Uyghur flags during a protest against China, near the Chinese consulate in Istanbul, Turkey, Feb. 9, 2021. (EPA Photo)
by REUTERS
Mar 01, 2021 7:27 pm

China has been mounting an increasingly aggressive and unprecedented campaign recently to push back against growing global pressure over its treatment of the Muslim Uyghur minority in far west Xinjiang. The Asian country has been launching explicit attacks particularly on women who have made claims of abuse.

As allegations of human rights violations in Xinjiang mount, with a growing number of Western lawmakers accusing China of genocide, Beijing is focusing on discrediting the female Uyghur witnesses behind recent reports of abuse.

Chinese officials have named women, disclosed what they say is private medical data and information on the women's fertility, and accused some of having affairs and one of having a sexually transmitted disease. The officials said the information was evidence of bad character, invalidating the women's accounts of abuse in Xinjiang.

"To rebuke some media's disgusting acts, we have taken a series of measures," Xu Guixiang, the deputy head of Xinjiang's publicity department, told a December news conference that was part of China's pushback campaign. It includes hours-long briefings, with footage of Xinjiang residents and family members reading monologues.

A Reuters review of dozens of hours of presentations from recent months and hundreds of pages of literature, as well as interviews with experts, shows a meticulous and wide-reaching campaign that hints at China's fears that it is losing control of the Xinjiang narrative.

"One reason that the Communist Party is so concerned about these testimonies from women is because it undermines their initial premise for what they're doing there, which is anti-terrorism," said James Millward, a professor of Chinese history at Georgetown University and expert in Xinjiang policy.

"The fact that there are so many women in the camps ... who don't have the faintest appearance of being violent people, this just shows how this has nothing to do with terrorism."

Uyghurs make up most of the million people that a U.N. estimate says have been detained in Xinjiang camps under what the central government calls a campaign against terrorism. Accusations by activists and some Western politicians include torture, forced labor and sterilizations.

In a rare U.S. bipartisan agreement, the top diplomats of the former administration of Donald Trump and the new one of Joe Biden have called China's treatment of the Uyghurs genocide, a stance adopted last week by the Canadian and Dutch parliaments.

China faces sanctions such as a ban on U.S purchases of Xinjiang cotton and tomatoes and calls by some Western lawmakers to boycott the 2022 Beijing Winter Olympics.

China's foreign ministry on Monday declined to answer questions on the specific information released about the women but said "some anti-China forces ignore facts and truth and wantonly fabricate all kinds of Xinjiang-related lies. People of all ethnic groups in Xinjiang, including Xinjiang women, live and work in peace and contentment."

Beijing has rejected calls for an independent U.N. investigation into Xinjiang's internment program. Journalists and diplomats have not been permitted access to the camps outside of tightly controlled government tours. Uyghurs in Xinjiang have told Reuters they fear reprisals for speaking to the press while in China.

Beijing has packaged content from the events in two volumes titled, "The Truth About Xinjiang: Exposing the US-Led Lies and Slanders About Xinjiang".

In January, the Twitter account of China's U.S. embassy was suspended for a tweet that said Uyghur women had been "baby-making machines" before Beijing instituted its system of camps.

"The biological, the reproductive, the gendered aspect of this is particularly horrifying to the world," said Georgetown's Millward. China "seems to have recognized that... You now see them trying in this clumsy way to respond."

During a regular daily press briefing last week, foreign ministry spokesman Wang Wenbin held up images of witnesses who had described sexual abuse in Xinjiang. The account of one of them, he said, was "lies and rumors" because she had not recounted the experience in previous interviews. He gave medical details about the woman's fertility.

Xinjiang officials in January said a woman who had spoken to foreign media had syphilis, and they showed images of medical records - unsolicited information that was not directly related to her account.

A Xinjiang government official said of another witness last month: "Everyone knows about her inferior character. She's lazy and likes comfort, her private life is chaotic, her neighbors say that she committed adultery while in China."

Last week, the top spokeswoman for China's foreign ministry, Hua Chunying, tweeted images of four named witnesses, saying they had "raked their brains for lies", adding "they will never succeed."

China has declined to provide data on the number of people in the camps. Beijing initially denied the camps existed but now says they are vocational and education centers and that all the people have "graduated."