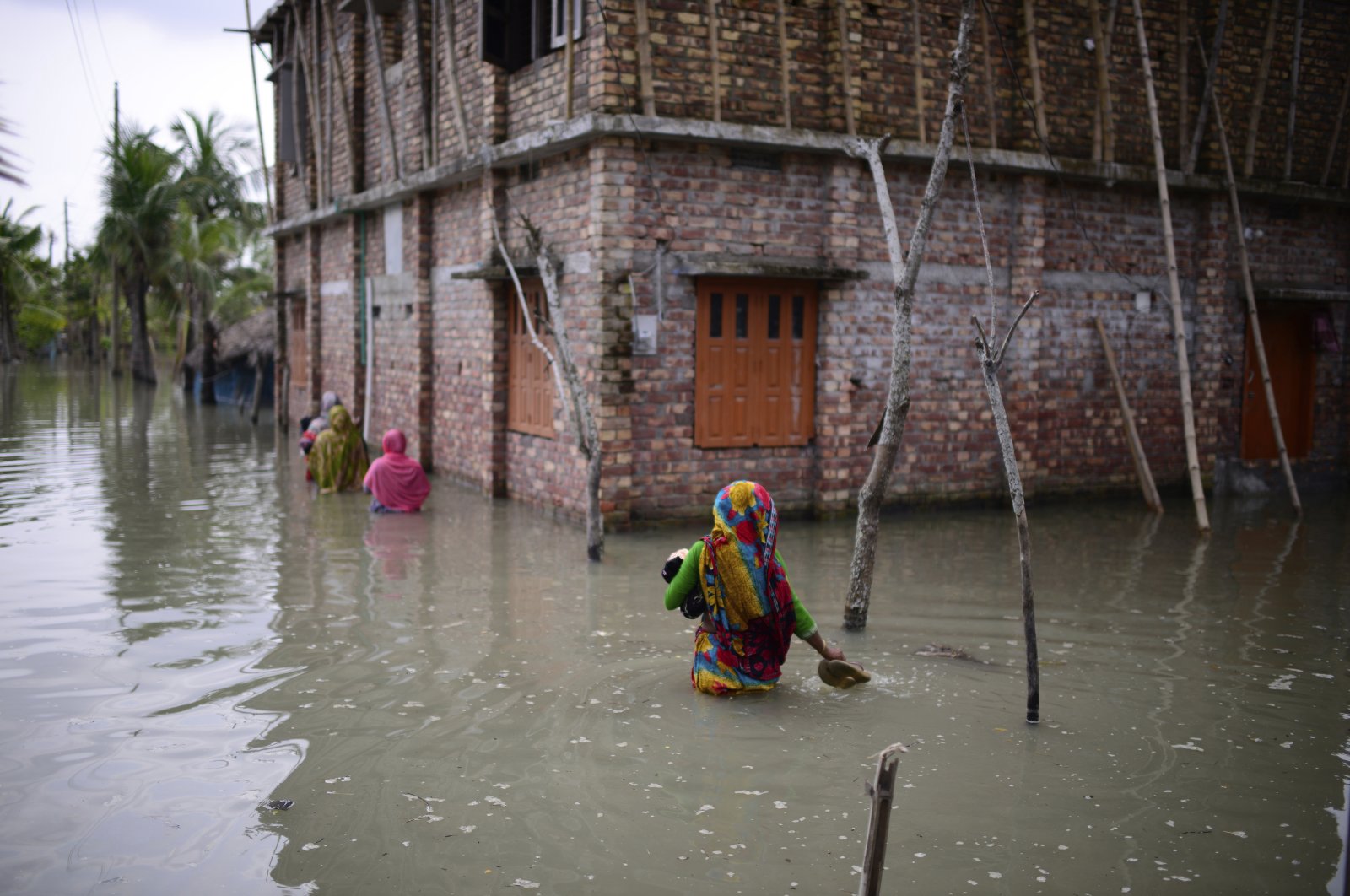 Villagers wade through waist-deep waters to reach their homes in Pratap Nagar that lies in the Shyamnagar region, in Satkhira, Bangladesh on Oct. 5, 2021. (AP Photo)
by ASSOCIATED PRESS Nov 03, 2021 10:30 am
RECOMMENDED

Abdus Satter can do nothing but sit back and watch as the sea erodes more and more of his life.

His village of Bonnotola in southwestern Bangladesh, with its muddy roads and tin-roofed houses, was once home to over 2,000 people. Most were farmers like the 58-year-old Satter. Then the rising seas poisoned the soil with saltwater. Two cyclones in the last two years destroyed the mud embankments that shielded the village from tidal waves.

Now, only 480 people remain, with the rest rendered homeless by the sea.

The effects of global warming – particularly increased cyclones, and coastal and tidal flooding that bring saltwater further inland – are devastating Bangladesh and destroying the livelihoods of millions, said Mohammad Shamsuddoha, chief executive of the nonprofit Center for Participatory Research Development.

“It’s a grave concern for a country like Bangladesh,” he said, adding that projections show some 30 million people may be displaced from the country’s coastal regions.

With world leaders gathered in Glasgow, Scotland, for a U.N. climate conference this week, countries like Bangladesh are pressing for more financial support to cope with global warming.

A decade-old deal for rich countries to give poor nations $100 billion each year to switch to clean energy and adapt to climate change has not been fulfilled. Even the money that is being provided – about $80 billion in 2019 – is spread too thin to make much of a difference on the ground.

In Gabura, another village in the Bengal River delta, Nazma Khatun, 43, has been struggling to feed her two daughters. Half of her meager daily income – less than $3 from sewing and selling cloth – goes toward medicine for skin diseases she says everyone in the village suffers from due to rising sea levels, which have contaminated land and water.

“We have water everywhere, but we don’t have a drop any more to drink from ponds or wells,” she said.

This land was once fertile. Khatun said mango and jackfruit used to flourish, and everyone grew vegetables in their backyard, relying on ponds, rivers and wells for drinking water.

In 1973, 833,000 hectares (3,216 square miles) of land were affected by the encroaching seawater, accelerated by more frequent cyclones and higher tides that have contaminated water supplies. That’s bigger than the U.S. state of Delaware.

At Bonbibi Tola village, women gather daily at a hand-pump well to collect water for cooking and drinking. The women walk up to 4 kilometers (2.5 miles) hauling water daily.

But this won’t last long. Wells in the region only have fresh water in the months after monsoon rains. In the summer – when the flow from Himalayan rivers decreases – fresh water becomes scarce, said one of the women, Maheswari Halder.

“This is the fate we all surrender to,” she said.

“The area needs maybe 500 desalination plants. But we’ve only 50 or so,” said Alamgir Kabir, director of a local NGO, the Nawabenki Ganomukhi Foundation.

Despite seeing its gross domestic product rise from $6.2 billion in 1972 to $305 billion in 2019, Bangladesh can’t pay the cost of global warming on its own. There are only six countries in the world more impacted by climate change from 2000 to 2019, according to the 2021 Climate Change Performance Index by nonprofit Germanwatch. In those years, Bangladesh lost 0.41% of its gross domestic product due to climate change, and a single cyclone in 2019 caused losses of $8.1 billion,

Nor should it, says Abul Kalam Azad, the country’s special envoy to the Climate Vulnerable Forum, a group of nations most at risk from the impacts predicted of a hotter future. Bangladesh, a country of about 160 million, has historically contributed a fraction of the world’s emissions, and yet the country is being devastated by climate change, he said.

Azad says aid in the form of high-cost loans would be of no use, but low-cost loans combined with grants would help.

Environmental campaigners say a sea change is needed in the international debate on climate aid to ensure a steady increase in funding to poor, vulnerable nations from a variety of public and private sources.

“You also need to make sure that at least 50% of the funds go into adaptation (to climate change) because people are on the front line,” said Jennifer Morgan, the head of Greenpeace International.

“The issue of loss and damage must be addressed, including global sharing of responsibility for climate migrants and those displaced by sea-level rise, salinity increase, river erosion, floods, droughts,” she said.

The 2015 Paris accord already contains a provision for this. Article 8 states that parties to the pact, “recognize the importance of averting, minimizing and addressing loss and damage associated with the adverse effects of climate change, including extreme weather events and slow onset events, and the role of sustainable development in reducing the risk of loss and damage.”

“Unfortunately, there hasn’t been a single penny paid for loss and damage,” Saleemul Huq, director of the Bangladesh-based International Centre for Climate Change and Development, said in a recent documentary.

Huq argues that a compensation fund for oil spills offers a template for how big polluters, particularly fossil fuel companies, could provide funding to nations whose islands have been washed away or farms turned to desert as a result of global warming.

Rich countries such as the United States are wary of any suggestion that they might be legally liable for their decades-long greenhouse gas emissions still lingering in the atmosphere.

But addressing such issues in Glasgow will be critical, said Huq. “Otherwise, the developing countries, particularly the most vulnerable countries, will deem the (conference) a failure.”

For Satter, it may already be too late.

Every morning, waves gush into his home and soon he, his wife and two sons will have to flee. The sea has snatched away their future and their past, he said, pointing to a muddy trench that was once a courtyard where his parents’ graves lay.