G-7 to pressure Biden as deadline for Afghan evacuation looms 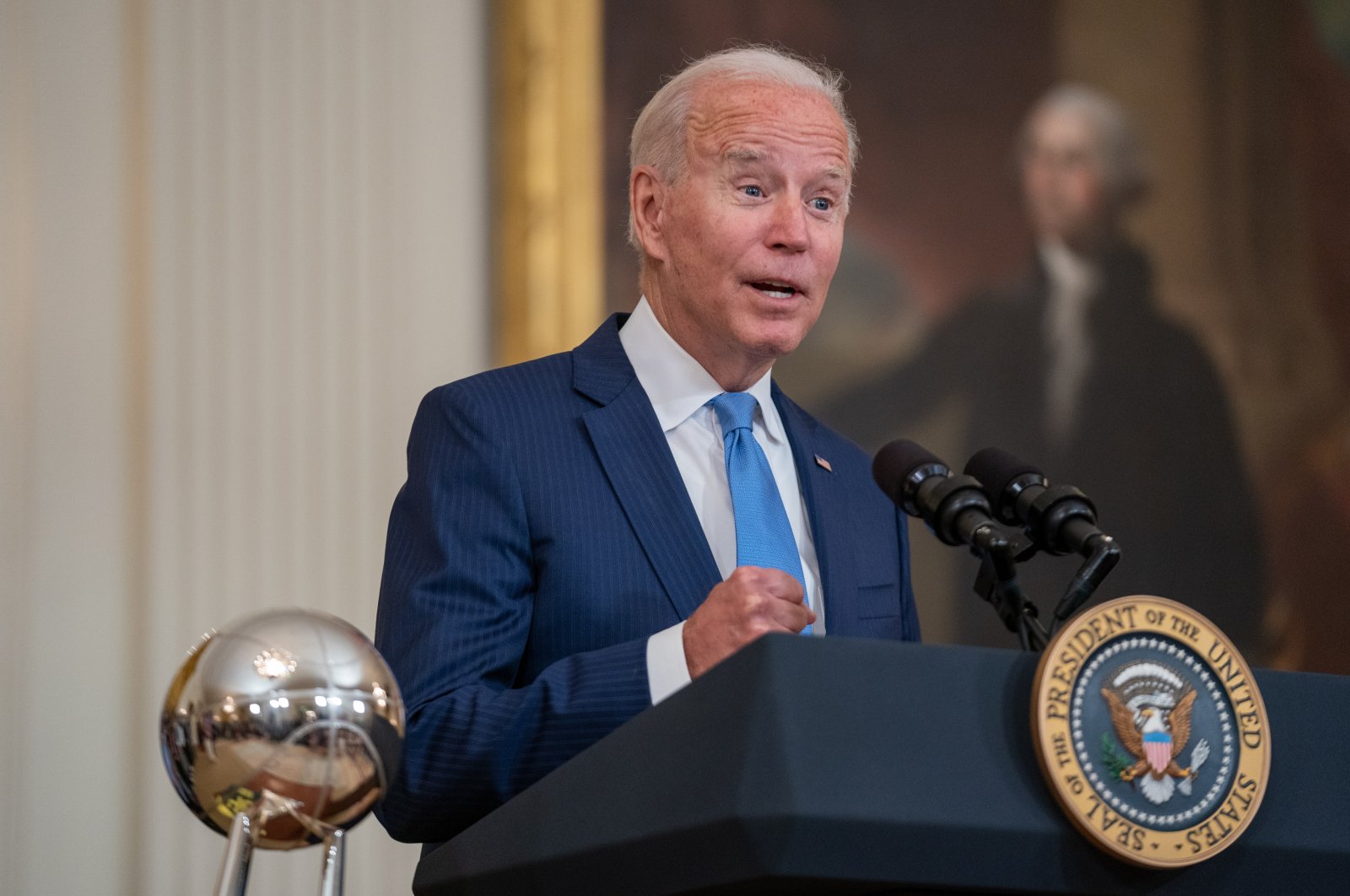 U.S. President Joe Biden is set to come under pressure at a G-7 meeting as world leaders are seeking more time to evacuate thousands of people hoping to flee from Afghanistan as fears grow that time for the massive operation is running out

The U.S. military pulled off its biggest day of evacuation flights out of Afghanistan by far on Monday, but deadly violence that has blocked many desperate evacuees from entering Kabul Hamid Karzai International Airport persisted. The Taliban signaled they might soon seek to shut down the airlifts as the G-7 leaders were due to meet on Tuesday at an emergency summit over the deadline to complete evacuations from the country by Aug. 31.

Widespread chaos punctuated by sporadic violence has gripped Kabul's airport since the Taliban took over the Afghan capital on Aug. 15, with Western and Afghan forces driving back crowds desperate to flee. Twenty-eight U.S. military flights ferried about 10,400 people to safety out of Taliban-held Afghanistan over 24 hours that ended early Monday morning, and 15 C-17 flights over the next 12 hours brought out another 6,660, White House officials said. According to The Associated Press (AP), the chief Pentagon spokesperson, John Kirby, said the faster pace of evacuation was due in part to coordination with Taliban commanders on getting evacuees into the airport.

"Thus far, and going forward, it does require constant coordination and deconfliction with the Taliban,” Kirby said. "What we've seen is, this deconfliction has worked well in terms of allowing access and flow as well as reducing the overall size of the crowds just outside the airport.”

U.S. President Joe Biden's national security adviser, Jake Sullivan, said at the White House that talks with the Taliban are continuing as the administration looks for additional ways to safely move more Americans and others into the Kabul airport.

"We are in talks with the Taliban on a daily basis through both political and security channels,” he said, adding that ultimately it will be Biden's decision alone whether to continue military-led evacuation operations beyond Aug. 31. That's the date Biden had set for completing the withdrawal of troops.

California Democrat Rep. Adam Schiff, chair of the House intelligence committee, told reporters after a committee briefing Monday on the Afghanistan withdrawal "it was hard for me to imagine” wrapping up the airlifts by the end of the month. He also said it was clear "there were any number of warnings” to the administration "of a very rapid takeover” by the Taliban. After more than a week of evacuations plagued by major obstacles, including Taliban forces and crushing crowds that are making approaching the airport difficult and dangerous, the number of people flown out met – and exceeded – U.S. projections for the first time.

The count was more than twice the 3,900 flown out in the previous 24 hours on U.S. military planes. Army Gen. Stephen Lyons, head of U.S. Transportation Command, which manages the military aircraft that are executing the Kabul airlift, told a Pentagon news conference that more than 200 planes are involved, including aerial refueling planes, and that arriving planes are spending less than an hour on the tarmac at Kabul before loading and taking off. He said the nonstop mission is taking a toll on aircrews. "They're tired,” Lyons said of the crews. "They're probably exhausted in some cases.”

On a more positive note, Lyons said that in addition to the widely reported case of an Afghan woman giving birth aboard a U.S. evacuation aircraft, two other babies have been born in similar circumstances. He did not provide details. The Pentagon said it has added a fourth U.S. military base, in New Jersey, to three others – in Virginia, Texas and Wisconsin – that are prepared to temporarily house arriving Afghans. Maj. Gen. Hank Williams, the Joint Staff deputy director for regional operations, told reporters there are now about 1,200 Afghans at those military bases.

The four bases combined are capable of housing up to 25,000 evacuees, Kirby said. Afghan evacuees continued to arrive at Dulles International Airport outside of Washington. Exhaustion clouded the faces of many of the adults. "How does it feel to be here?" a journalist asked one man.

"We are safe,” he answered. An older woman sank with relief into an offered wheelchair, and a little girl carried by an older boy shaded her eyes to look curiously around. The scramble to evacuate left many arrivals carrying only a book bag or purse, or a plastic shopping bag of belongings. Some arrived for their new lives entirely empty-handed. Biden said Sunday he would not rule out extending the evacuation beyond Aug. 31.

On Tuesday, seven leaders will meet in a virtual format confronted by a resurgence in the pandemic, more dire news on climate change and, most immediately and perhaps importantly, Afghanistan. The country’s burgeoning refugee crisis, the collapse of its government and fears of a resurgence in Afghan-based terrorism have left the G-7 allies scrambling and threaten the unity of the bloc.

The leaders of the G-7 were expected to decide on a spate of issues such as whether they should impose sanctions on the Taliban or officially recognize the group to avoid a humanitarian catastrophe and protect human rights in the battled territory. The tensions between the U.S. and U.K. were high as American allies are unhappy with Biden's approach toward Afghan issues. According to them, the U.S. president has not been fully honest with allies about withdrawal plans.

“We want to start the process of developing a clear plan so that we can all deal with the new Afghan regime in a unified and concerted way,” Britain’s U.S. envoy, Karen Pierce, told Reuters. “We will judge the new regime by actions, not words.”

British Prime Minister Boris Johnson, the host of the June summit in the English resort town of Cornwall, is now reconvening the leaders for crisis talks on Afghanistan amid widespread unhappiness about Biden’s handling of the Afghanistan withdrawal. Complaints have come from Britain, France, Germany and others in the G-7, which includes only one non-NATO member, Japan.

Despite Biden’s April announcement that the U.S. would completely withdraw from Afghanistan by the 20th anniversary of the Sept. 11, 2001, attacks, the central Asian nation was almost an afterthought when the G-7 met in June.

COVID-19, China and climate change dominated the agenda, as well as expectations for Biden’s impending summit with Russian President Vladimir Putin. The leaders put Afghanistan as number 57 out of 70 points in their final 25-page communique – behind Ukraine, Belarus and Ethiopia.

Johnson and others, including French President Emmanuel Macron, are pushing Biden to extend his self-imposed Aug. 31 deadline for the total withdrawal of U.S. forces in order to ensure the evacuation of all foreign nationals as well as Afghans who worked for or otherwise supported the American-led NATO operation that vanquished the Taliban in 2001 and has now accepted defeat. On the eve of the meeting, the White House said Biden and Johnson had spoken by phone and "discussed the ongoing efforts by our diplomatic and military personnel to evacuate their citizens, local staff, and other vulnerable Afghans” as well as "the importance of close coordination with allies and partners in managing the current situation and forging a common approach to Afghanistan policy.”

White House press secretary Jen Psaki said she expected questions about the Afghanistan evacuation timeline to be part of the G-7 meeting. Psaki would not predict any announcements from the meeting, but she said the focus would be to evacuate Americans and Afghan allies as quickly as possible.

White House aides have said they think the meeting could grow contentious, as U.S. allies have looked on with disapproval at the tumultuous American drawdown. British Defense Secretary Ben Wallace, who has called the U.S. deal with the Taliban that set the deadline a "mistake,” struck an almost pleading tone Monday, saying that if Biden extended the operation "even by a day or two, that will give us a day or two more to evacuate people.”

Senior British military officers have expressed anger over the U.S. pullout, saying it exposes the hollowness of the trans-Atlantic "special relationship” – a phrase used since World War II to stress the bonds of history, friendship and shared diplomatic interests between London and Washington. And the German government is expressing impatience with the pace of the evacuation effort.

Foreign Minister Heiko Maas said the majority of local staff who worked for his country in Afghanistan haven’t yet been gotten out and called Tuesday’s G-7 meeting "very important” for discussing international access to the Kabul airport beyond Aug. 31.

The Biden administration officials have refused to be pinned down about whether an extension is likely or even possible given the Taliban’s demand that all U.S. forces leave by the Aug. 31 deadline.