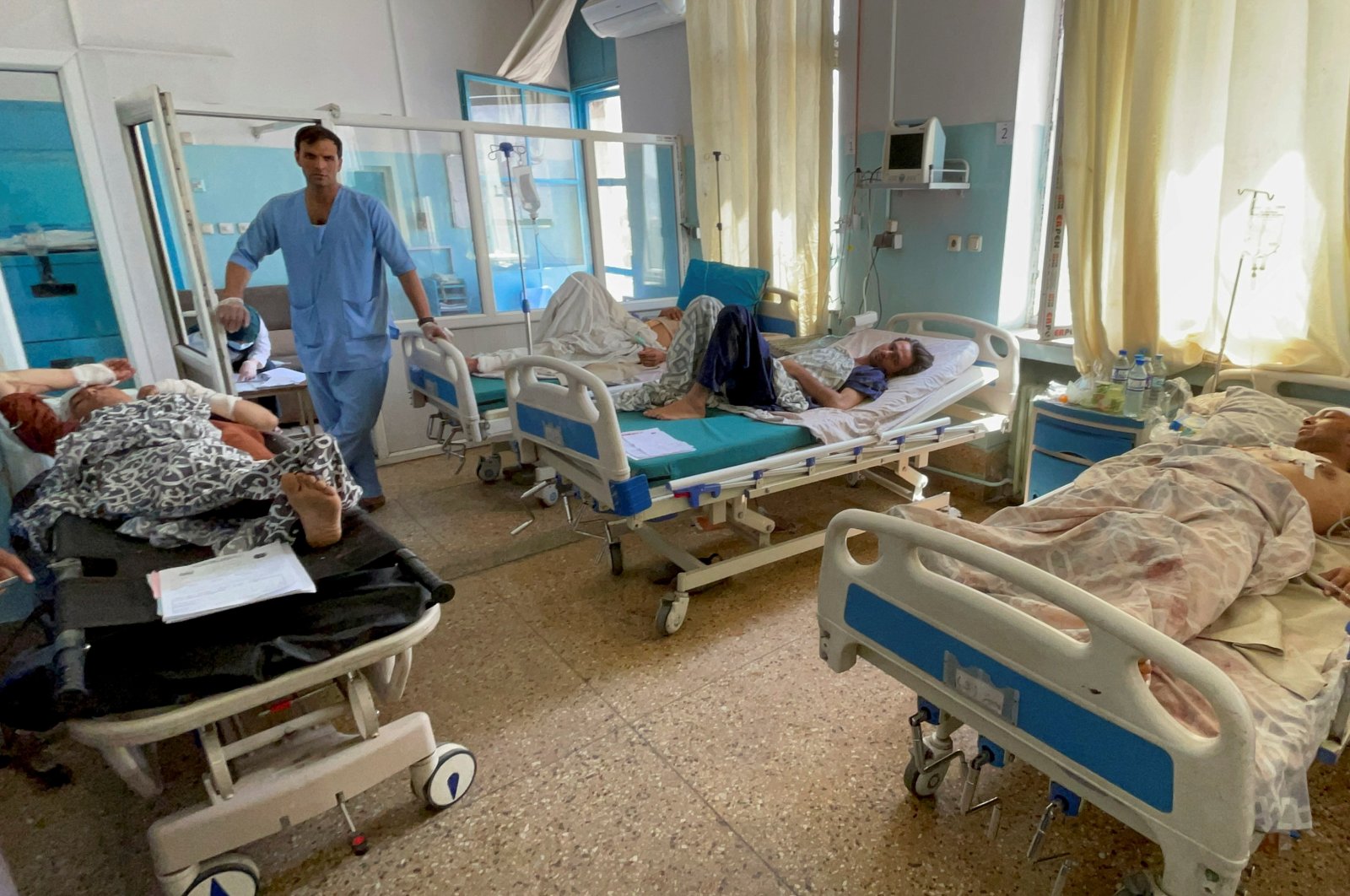 Wounded Afghan men receive treatment at a hospital after explosions outside the airport in Kabul, Afghanistan, Aug. 27, 2021. (Reuters Photo)
by DAILY SABAH WITH AA Aug 27, 2021 11:48 am
RECOMMENDED

Condemnation poured in from every corner of the world following deadly blasts in Afghanistan's capital Kabul Thursday. World leaders and senior officials denounced Thursday’s terrorist attacks, which killed over 100 people, including 13 American soldiers, and wounded over 140 others.

In a written statement, Qatar's Foreign Ministry strongly condemned the attack and conveyed condolences to the relatives of those who lost their lives and wished a speedy recovery to the injured. On Twitter, Jordan’s Foreign Minister Ayman Safadi said, "Our thoughts & prayers are with victims of these horrific crimes."

European leaders, who are rushing to evacuate their citizens from Kabul, joined the chorus and slammed the Daesh terrorist group for the attacks. French President Emmanuel Macron extended his condolences to the families of the American and Afghan victims of the attack and expressed his support to the injured, said a statement from Elysee Palace. He emphasized that France will complete evacuations and provide long-term humanitarian action and protection for threatened Afghan nationals.

On Twitter, French Defense Minister Florence Parly offered her condolences to her U.S. counterpart Lloyd Austin over the "horrendous attack."

"My thoughts are with the families and loved ones of the US Marines who lost their lives while helping those who wished to flee the terror. France stands with the United States," Parly added. Ukrainian President Volodymyr Zelenskyy also decried the "terrible terrorist attack" in Kabul. "Deepest condolences to the people of the US & Afghanistan, to the families of the victims. Wish speedy recovery to the wounded. Terrorism must be condemned by all parties in Afghanistan. We must work jointly to evacuate those who need help," he said on Twitter. In a statement,

On Friday, French European Affairs Minister Clement Beaune told radio Europe 1 that his country maintains evacuation operations in order to "evacuate as many people as possible.” Speaking after the attacks in Kabul, Macron asserted that France identified "several hundred people,” including French nationals and a majority of Afghans, who remain to be evacuated. Before the news about deadly blast broke out French Prime Minister Jean Castex announced that France would halt its operation on Friday evening.

Spanish Prime Minister Pedro Sanchez also extended his condolences and said on Twitter that: "Our heartfelt solidarity with the victims. The international community stands with the Afghan people, ensuring their rights and dignity." Noting that Spain is working to evacuate "as many people as possible," Sanchez said "enormous work" is being done by all the personnel involved in the evacuations from Afghanistan on a "particularly difficult day." He added that two more planes have arrived in Spain, one with 241 people on board and another with 95 passengers.

New Zealand Prime Minister Jacinda Ardern said, "Our thoughts and condolences are with all of those in Afghanistan who have lost lives or suffered injuries, including US forces, our other partners on the ground, and the families and friends of all who have been affected by this appalling attack.” She added that New Zealand’s final Kabul evacuation flight was completed ahead of Thursday's attack, with all the evacuees taken to the United Arab Emirates (UAE).

"We condemn this heinous terrorist attack in strongest terms," a statement from the Turkish Ministry of Foreign Affairs said late Thursday in the wake of twin bombings in Kabul. "Deeply saddened by the loss of lives after today’s attack in Kabul," Foreign Minister Mevlüt Çavuşoğlu also said in a tweet later on. "We strongly condemn this heinous terror attack. Express my condolences to the families of those killed & my wishes for a speedy recovery to those wounded."

Indian Foreign Ministry spokesperson Arindam Bagchi also "strongly condemned" the bomb blasts in Kabul. "Extend our heartfelt condolences to the families of the victims of this terrorist attack," Bagchi said on Twitter. "Our thoughts and prayers also go out to the injured. Today’s attacks reinforce the need for the world to stand unitedly against terrorism and all those who provide sanctuaries to terrorists."