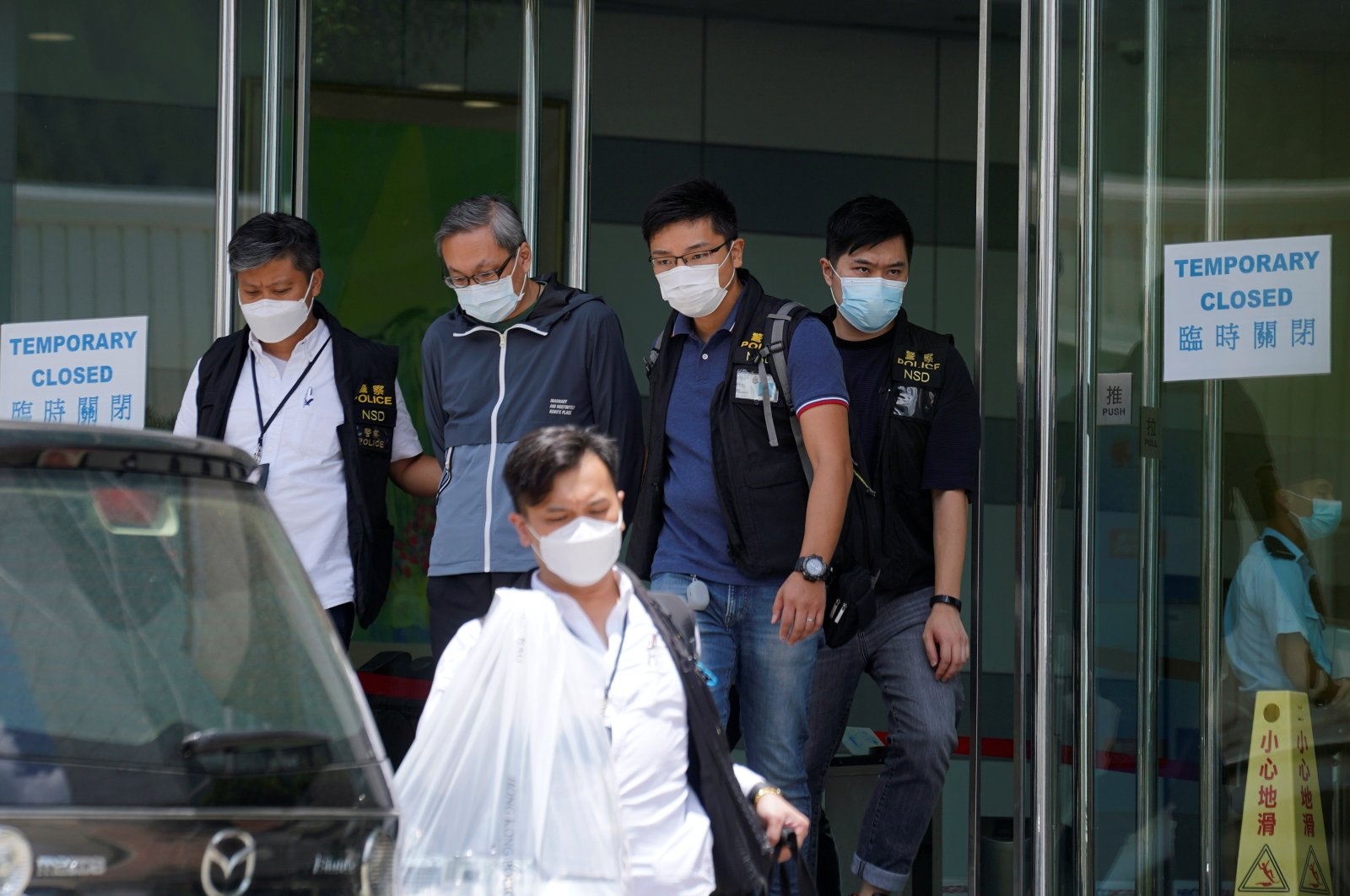 Hong Kong police arrested the chief editor and four executives of pro-democracy newspaper Apple Daily on Thursday, raiding its newsroom for a second time in the latest blow to the outspoken tabloid.

Some 500 Hong Kong police officers sifted through reporters' computers and notebooks. Around dawn, police arrested five executives of the newspaper, and officers were later seen sitting at computers in the newsroom after entering with a warrant to seize journalistic materials, including from reporters' phones and laptops.

The raid is the latest blow to media tycoon Jimmy Lai, the tabloid's owner and a staunch Beijing critic, whose assets have been frozen under the security law and who is serving prison sentences for taking part in illegal assemblies.

In comments raising further alarm over media freedoms in Hong Kong, Security Secretary John Lee described the newsroom as a "crime scene" and said the operation was aimed at those who use reporting as a "tool to endanger" national security. He did not elaborate on the dozens of articles police said they were taking aim, at but said the five were arrested for a conspiracy to make "use of journalistic work" to incite foreign forces to impose sanctions on Hong Kong and China.

"Normal journalists are different from these people. Don't collude with them," he told reporters. "Do your journalistic work as freely as you like in accordance with the law, provided you do not conspire or have any intention to break... the national security law."

Senior Superintendent Li Kwai-wah said the tabloid's reports dated back to 2019, without saying when the most recent were published. The legislation is not retrospective but prosecutors can use actions from before its implementation as evidence.

Police have also frozen HK$18 million ($2.32 million) of assets owned by three companies linked to Apple Daily and said that the raid was not aimed at the media industry as a whole. In a letter to its readers, Apple Daily said that it was the victim of a "targeted attack by the regime," but that its staff "will continue to stick to their posts loyally and fight to the end."

Police seized 38 computers used by its reporters, Apple Daily said. It was the second time national security police have raided the Apple Daily headquarters; 200 officers went in last year to arrest Lai on suspicion of colluding with foreign forces. Lai has been in detention since December, denied bail under the security law and serving several sentences for taking part in some unauthorized rallies, including during the global financial hub's mass pro-democracy protests in 2019.

The security law was Beijing's first major move to set China's most restive city on an authoritarian path. It punishes anything Beijing deems as subversion, secessionism, terrorism and collusion with foreign forces with up to life in prison.

"This is a blatant attack on the editorial side of Apple Daily," Mark Simon, an adviser to Lai who is outside Hong Kong, told Reuters. "They're arresting the top editorial folks." Asked how long he thinks the newspaper can survive, Simon said: "They decide, not us," referring to authorities. China's Hong Kong Liaison Office said it firmly supported what it described as "just action" by the police.

Pictures published by Apple Daily showed police sitting at reporters' desks and using their computers. A person streaming a live feed for Apple Daily's Facebook page said reporters were prevented from accessing certain floors or getting their equipment or notebooks.

Chief editor Law was seen walking in handcuffs, flanked by police officers. The Apple Daily paper's general news desk told reporters in a text message seen by Reuters to carry on with their assignments outside the building for the time being.

The move is the latest blow to Apple Daily after authorities last month directed jailed tycoon Lai's shares in Next Digital, publisher of the newspaper, to be frozen. In May, Reuters reported that Hong Kong's security chief sent letters to Lai and branches of HSBC and Citibank threatening up to seven years in jail for any dealings with the billionaire's accounts in the city.

Apple Daily is an unapologetic tabloid founded 26 years ago that mixes pro-democracy discourse with celebrity gossip and investigations of those in power, and is popular in Hong Kong.

"The arrests... under Hong Kong’s Orwellian National Security Law destroy any remaining fiction that Hong Kong supports freedom of the press," said Steven Butler, Committee to Protect Journalists' Asia program coordinator. "China, which controls Hong Kong, may be able to eliminate the paper, which it sees as an annoying critic, but only at a steep price to be paid by the people of Hong Kong, who had enjoyed decades of free access to information," he added.