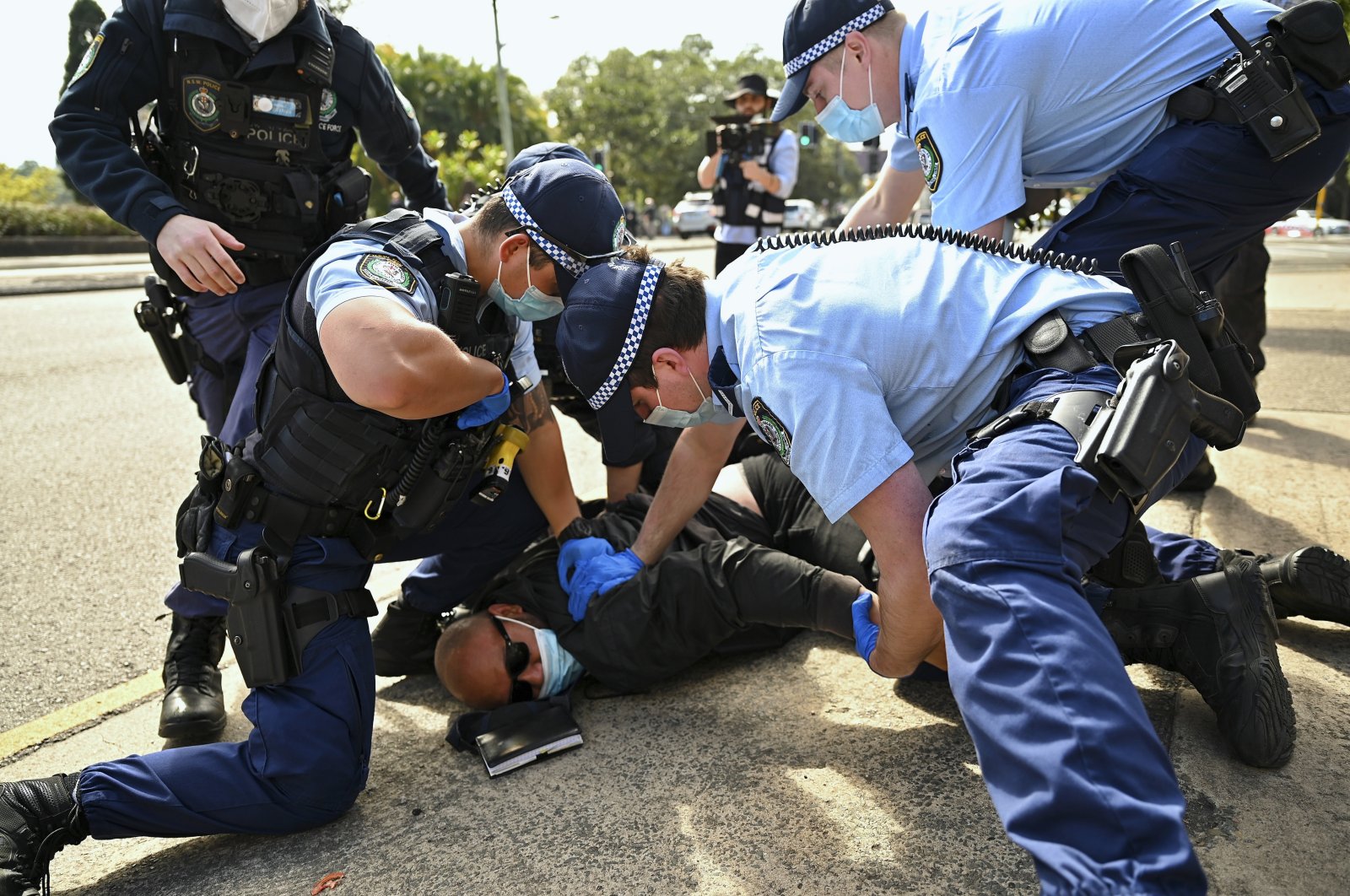 Anti-lockdown protests in Australia's largest cities Sydney and Melbourne turned violent Saturday, with police arresting hundreds following clashes in the midst of the country's ongoing battle against the worst spike of COVID-19 cases.

Mounted police used pepper spray in Melbourne to break up crowds of more than 4,000 surging toward police lines, while smaller groups of protesters were prevented from congregating in Sydney by a large contingent of riot police.

Victorian state police said that they arrested 218 people in the state capital Melbourne. They issued 236 fines and kept three people in custody for assaulting police. The arrested people face fines of AU$5,452 ($3,900) each for breaching public health orders.

Police in New South Wales, where Sydney is the capital, said they charged 47 people with breaching public health orders or resisting arrest, among other offenses, and issued more than 260 fines ranging from AU$50 to AU$3,000. The police said about 250 people made it to the city center for the protest.

Sydney, Australia's biggest city with more than 5 million people, has been in a strict lockdown for more than two months, failing to contain an outbreak that has spread across internal borders and as far as neighboring New Zealand.

The vast majority of the 894 cases reported across Australia Saturday were found in Sydney, the epicenter of the delta variant-fuelled outbreak.

"We are in a very serious situation here in New South Wales," said state Health Minister Brad Hazzard. "There is no time now to be selfish, it's time to think of the broader community and your families."

Police patrolled Sydney's streets and blocked private and public transport into the city center to reduce the number of people gathering at an unauthorized protest.

In Melbourne, the country's second-most populous city, a large crowd managed to march and some clashed with police, after state Premier Daniel Andrews expanded a city lockdown to the entire state. Victoria Police Chief Commissioner Shane Patton had earlier warned people to stay away from the protest, adding it was "just ridiculous to think that people would be so selfish and come and do this."

Several hundred people also protested peacefully in Brisbane, which is not in lockdown.

Just 7% of Australians support the often-violent protests, according to a late-July poll by market research firm Utting Research.

Compliance with public health rules has been one of the key reasons cited behind Australia's success, relative to other rich countries, in managing the coronavirus pandemic. But the country has been struggling to rein in the third wave of infections that began in Sydney in mid-June.

Australia has had about 43,000 COVID-19 cases and 978 deaths. But while those numbers are low, only about a third of Australians aged 16 and above have been fully vaccinated, according to federal health ministry data released Saturday.