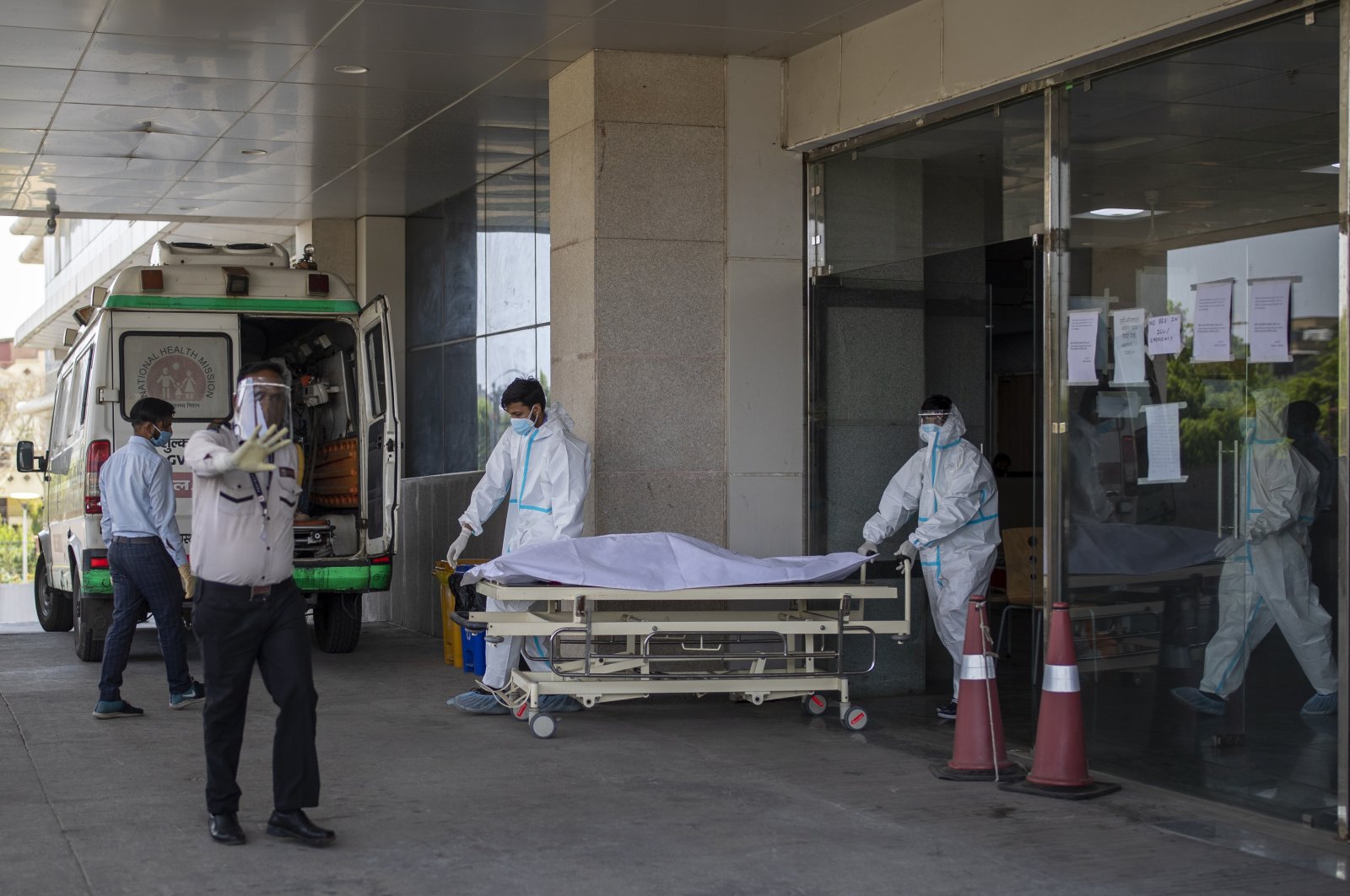 A security guard objects to taking pictures as hospital staff shift the body of a COVID-19 patient on a stretcher to a waiting ambulance at a government COVID-19 hospital in Noida, a suburb of New Delhi, India, April 21, 2021. (AP Photo)
by French Press Agency - AFP Apr 21, 2021 1:47 pm
RECOMMENDED

India set a new record Wednesday with over 2,000 deaths in 24 hours and 295,041 new cases, while oxygen supplies in hospitals were running perilously low amid the rising demand for beds.

The total number of cases in India now stands at 15.6 million, second only to the United States.The total number of deaths reached 182,553. Governments remain fearful of similar surges elsewhere in the world with many vaccine rollouts hampered by low supplies, and a top European Union official promised to have enough doses available to vaccinate 70% of the bloc's adults by the summer.

India – home to 1.3 billion people – is also struggling with low vaccine supplies and has put the brakes on exports of locally produced AstraZeneca shots as it fights a terrifying COVID-19 wave that has overwhelmed its hospitals.

"I am scared for my parents and relatives more than I am scared for myself because they are not young anymore and getting admitted into a hospital right now is next to impossible," a resident of the Indian capital New Delhi told Agence France-Presse (AFP).

There had been hopes that despite its packed cities and poor healthcare, India had managed to dodge largely unscathed a pandemic that has killed more than 3 million people around the world. But recent weeks have seen mass gatherings including millions attending the Kumbh Mela religious festival, political rallies as well as lavish weddings – and a terrifying rise in cases.

Nepal's former king and queen tested positive on their return after attending the Kumbh Mela, their press secretary said Tuesday.

"This second corona wave came like a storm," Indian Prime Minister Narendra Modi said in an address to the nation on Tuesday.

'Everybody should get vaccinated'

European leaders are aiming to revive the EU's sluggish vaccine rollout with more supplies and choice as some of the bloc's biggest member nations struggle with worrying case numbers. Thierry Breton, the EU's internal markets commissioner, told French newspaper Le Figaro the bloc was now set to have enough doses to cover 70% of its adult population by mid-July.

And the EU's medical regulator said Tuesday that blood clots should be listed as a "very rare" side effect of Johnson & Johnson's vaccine, but that the benefits of the shot still outweighed the risks. The single-shot J&J vaccine is approved for use in Europe but has not been given out yet.

The United States is also expected to rule on the J&J shot by Friday, with the world's worst-hit nation jabbing millions per week as it aims for a return to normality. Some of the vaccinated in New York City were offered an unlikely freebie on Tuesday: a marijuana joint.

Activists celebrating the recent legalization of recreational pot in New York state handed out free doobies in Manhattan to anyone with proof of receiving at least one shot. "Everybody should get vaccinated. It should not be weed that is getting them there," said freebie recipient Sarah Overholt, 38. "But if it works, then it works."

'I want this to end quickly'

Governments in South America, one of the worst-hit regions of the world, also stepped up efforts to vaccinate as many people as quickly as possible. Colombia on Tuesday gave the green light for the private sector to buy and distribute vaccines under certain conditions, hoping to boost a slow immunization campaign.

Argentina, meanwhile, will be the first Latin American country to produce Russia's Sputnik V vaccine, according to the RDIF sovereign fund, which financed the development of the shot. But a deadly second wave continued to sweep across Brazil, which has the second-highest death toll in the world after the United States.

Staff have been overwhelmed at the Vila Formosa cemetary in Sao Paulo, Brazil's biggest city. "I want this to end quickly, because it is very sad," said one of the gravediggers. "We try not to get upset in our work, but it is sad, it is a lot of people, and a long time."