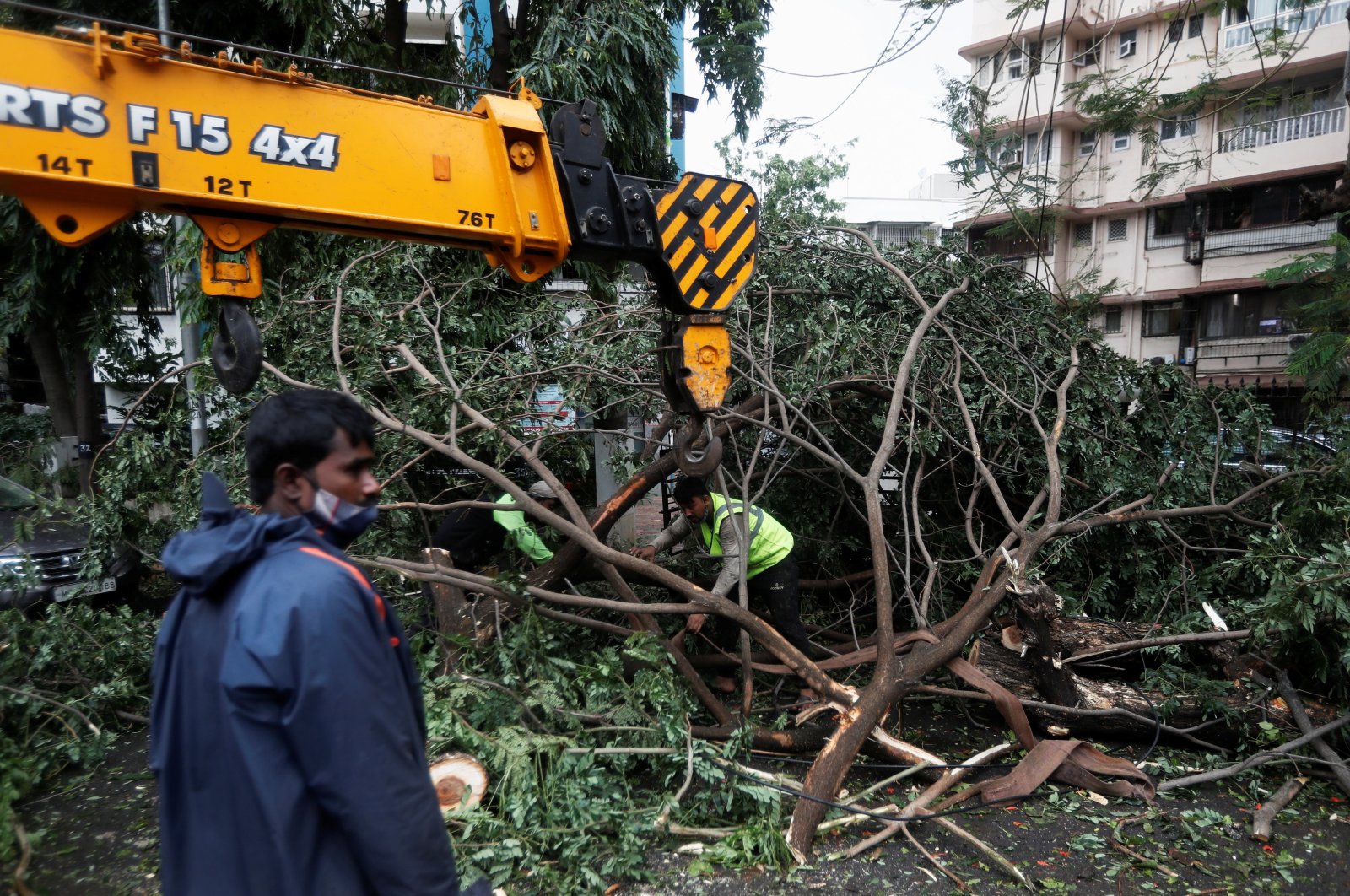 People attempt to remove uprooted trees from the entrance of a residential building after strong winds caused by Cyclone Tauktae, in Mumbai, India, May 18, 2021. (Reuters Photo)
by Agencies May 18, 2021 11:29 am
RECOMMENDED

India's total COVID-19 caseload surged past 25 million Tuesday as a powerful cyclone complicated the health crisis in one of the states where the disease is spreading most quickly.

At least 27 people died and almost 100 were missing on Tuesday after a monster cyclone slammed into western India. Hundreds of thousands of people were left without power after Cyclone Tauktae hammered the Gujarat coast on Monday evening. Wind up to 130 kilometers (80 miles) per hour smashed seafront windows and knocked over power lines and thousands of trees, blocking roads leading to affected areas, officials said.

The colossal swirling system is the latest of a growing number of increasingly severe storms in the Arabian Sea blamed on climate change.

"I have never experienced such intensity in my life," a hotel owner in the town of Bhavnagar said. "It was pitch dark as power was cut off and winds were making a roaring sound. It was scary."

One support vessel serving oil rigs that were walloped by 8-meter (26-foot) waves off Mumbai sank and 96 of the 273 people who had been on board were missing, the Indian Navy said Tuesday.

The defense ministry said 177 people were rescued, with operations continuing in "extremely challenging sea conditions." Two other barges and an oil rig were also in trouble.

Elsewhere, four fresh casualties were reported Tuesday, including a child crushed by a collapsing wall and an 80-year-old woman killed by a falling pole, Gujarat chief minister Vijay Rupani said. He added that over 16,500 houses were damaged, 40,000 trees uprooted and 2,400 villages without power.

"Since the cyclone made landfall we have not had power or communications," local official Aayush Oak told Agence France-Presse (AFP) by phone from the coastal district of Amreli where 40-50 mobile phone towers were damaged.

Although the cyclone was one of the fiercest in decades, better forecasting than in previous disasters meant that 200,000 people in danger zones were evacuated from their homes.

"Our planning over the last three days has paid off. We have managed to minimize human casualties," said Rupani.

But challenges remain. Forecasters warned of a tidal wave of 1-2 meters (3-6 feet) in some areas as the cyclone barrelled inland weakening slightly but still bringing heavy rains and gale-force winds.

COVID-19 tests were administered to 200,000 people evacuated from coastal districts of the western state of Gujarat before the cyclone struck late on Monday and efforts were being made to try to limit any spread of infections.

"Masks have been arranged for people shifted to shelter homes," said Sandip Sagale, a top official in Ahmedabad, the main city in Gujarat. "Efforts are also made to maintain social distancing."

India reported 263,533 new infections over the past 24 hours, while deaths from COVID-19 rose by a record 4,329. Only the United States has had more cases, or a worse single day death toll, when it lost 5,444 people on Feb. 12. But whereas the epidemic peaked months ago in the United States, there is no certainty that India's infections have.

Though the official count shows new infections subsiding, there are fears that the new, highly infectious B.1.617 variant, first found in India, is running out of control and many cases, particularly in rural areas, are going unreported due to lack of testing.

Prime Minister Narendra Modi's home state of Gujarat had suffered a 30% increase in infections since May 2, while the total number of vaccinations administered in the state last week was just 1.1 million – half the total of a month earlier.

The storm complicated efforts to tackle the coronavirus in the state as vaccinations were suspended for two days, while hospitals awaited backup generators to keep power running and additional oxygen supplies.

"Out of the 1,400 covid hospitals, power was disrupted in only 16. In 12 hospitals power has been restored and four are working on generators," Rupani said.

However one COVID-19 patient died in the town of Mahuva after he could not be moved in time before the storm hit, doctors said. The state also suspended vaccinations for two days. Mumbai did the same for one day.

Rupani said oxygen manufacturing and distribution was not disrupted.

In Maharashtra state, which was sideswiped by the cyclone on Monday, 1,000 coronavirus deaths were reported overnight – the worst toll nationwide. The infection rate in Maharashtra has soared 15% in the last two weeks, government data showed.

The pace of vaccination in Maharashtra has fallen 30% since peaking in early April, according to data from the government's Co-WIN portal. Since April 1, 269 doctors have died of COVID-19, 78 of them in the mostly rural state of Bihar, according to data released by the Indian Medical Association (IMA).

"The surge has been very devastating," Jayesh Lele, secretary-general of the IMA, told Reuters. In the northern state of Uttar Pradesh, home to more people than Brazil, rural areas have been severely hit, as health care systems have struggled to cope. Incensed by scarce testing and tracing, a state court remarked on Monday the situation was turning to "God's mercy," and hurtling toward a "third wave."

"If this is the state of affairs of five districts, one can guess where we are leading people of this state to, i.e. (a) third wave of the pandemic," the state's Allahabad High Court said. Chandrakant Lahariya, a public policy and health systems expert, said in the Hindustan Times newspaper that India's vaccine policy urgently needed a reset.

"For six weeks now, India’s vaccination drive has been struggling. How long must one wait before acknowledging that what was planned is not working?"

Lahariya asserted that "part of the problem seems to be the fact that there is political decision-making in the areas that are purely technical." "The political leadership should give a free hand to technical experts to decide and implement new strategies," he added.

U.S. President Joe Biden announced on Monday that his administration would send at least 20 million more COVID-19 vaccine doses abroad by the end of June. Biden has been under pressure to share vaccines to help contain worsening epidemics from India to Brazil, where new, more contagious coronavirus variants have become rampant.