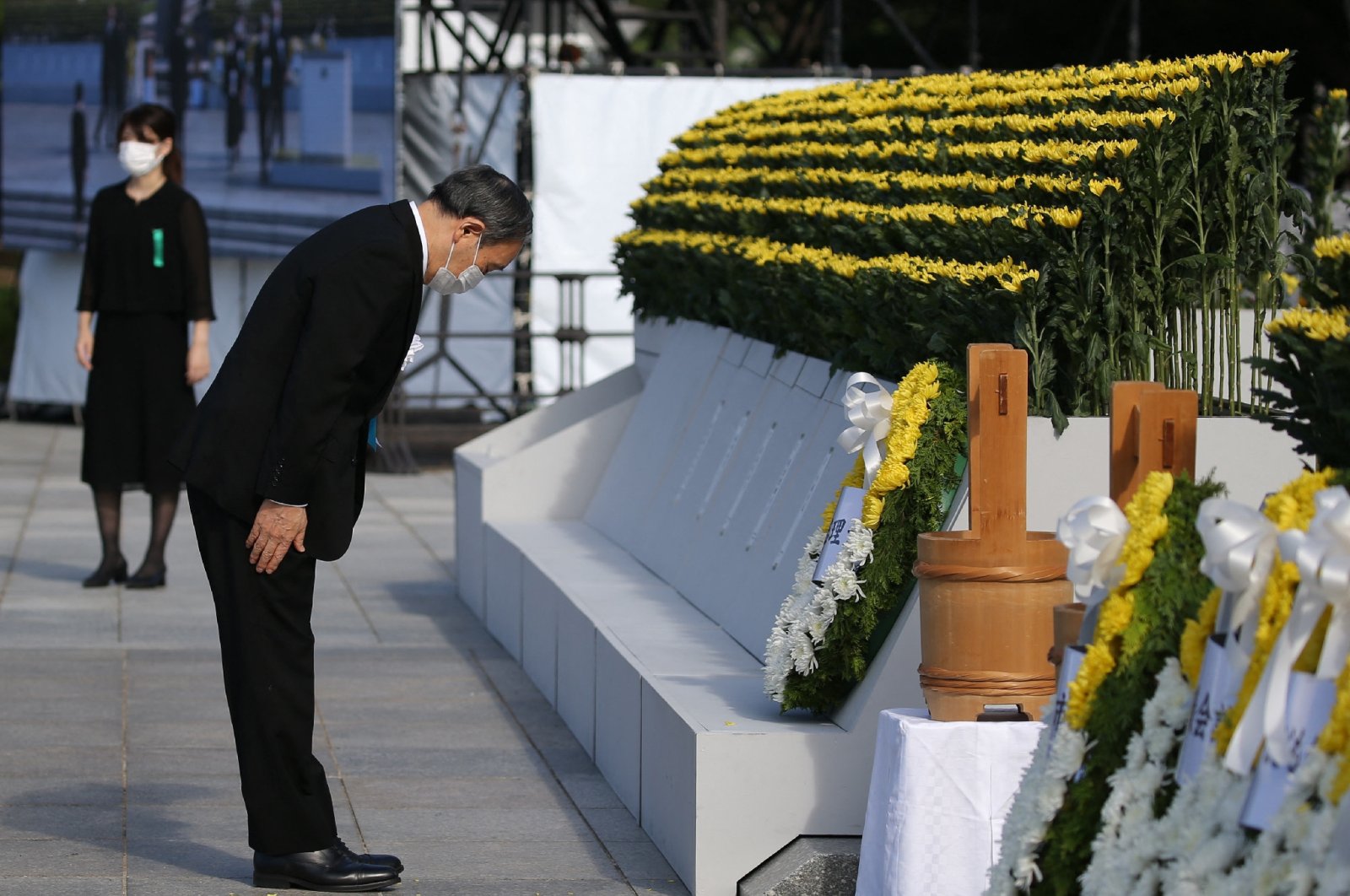 Japan's Prime Minister Yoshihide Suga (L) pays his respects during a ceremony to mark the 76th anniversary of the world's first atomic bomb attack at the Peace Memorial Park in Hiroshima on Aug. 6, 2021. (AFP Photo)
by Agencies Aug 06, 2021 8:38 am

As Japan marks 76 years since the United States dropped the world’s first atomic bomb on Hiroshima in 1945, destroying the city and killing over 140,000 people, calls for elimination of nuclear weapons grow

Hiroshima on Friday marked the 76th anniversary of the world's first atomic bombing, as the mayor of the Japanese city urged global leaders to unite to eliminate nuclear weapons, just as they are united against the coronavirus.

Mayor Kazumi Matsui urged world leaders to commit to nuclear disarmament as seriously as they tackle a pandemic that the international community recognizes as a "threat to humanity.”

"Nuclear weapons, developed to win wars, are a threat of total annihilation that we can certainly end, if all nations work together," Matsui said. "No sustainable society is possible with these weapons continually poised for indiscriminate slaughter."

The United States dropped the world’s first atomic bomb on Hiroshima on Aug. 6, 1945, destroying the city and killing 140,000 people. It dropped a second bomb three days later on Nagasaki, killing another 70,000. Japan surrendered Aug. 15, ending World War II and its nearly half-century of aggression in Asia. But countries stockpiled nuclear weapons in the Cold War and a standoff continues to this day.

The global Treaty on the Prohibition of Nuclear Weapons took effect in January after years of civil effort joined by the atomic bombing survivors, or hibakusha. But while more than 50 countries have ratified it, the treaty notably lacks the U.S. and other nuclear powers as well as Japan, which has relied on the U.S. nuclear umbrella for its defense since the war's end.

Matsui renewed his demand that his own government "immediately” sign and ratify the treaty and join the discussion, to live up to the long-cherished wish of atomic bombing survivors. He also demanded Japan provide productive mediation between nuclear and non-nuclear weapons states.

Prime Minister Yoshihide Suga, who attended the ceremony in Hiroshima, did not mention the treaty and instead stressed the need for a more "realistic” approach to bridge the nuclear and non-nuclear weapons states and by strengthening the NPT. Later at a news conference, Suga said he had no plan to sign the treaty.

"The treaty lacks support not only from the nuclear weapons states including the United States but also from many countries that do not possess nuclear arms,” Suga said. "What's appropriate is to seek a passage to realistically promote the nuclear disarmament."

Suga also apologized for inadvertently skipping parts of his speech including a pledge to pursue efforts toward achieving a nuclear-free world as head of the world's only country to have suffered atomic attacks and fully aware of its inhumanity. The error attracted attention because of the solemnity of the event, held each year to remember those who died from the blast. Suga is already under pressure from critics for going ahead with the Olympics amid a surge in COVID-19 infections.

"I want to take this occasion to apologize for having skipped some parts of my speech at the ceremony," Suga said at a news conference held after the ceremony, according to remarks carried by The Associated Press (AP). Suga reiterated during the news conference that the government doesn't believe hosting the Tokyo Olympics is contributing to the recent increase in COVID-19 infections. The government will also discuss with Olympics organizers on the issue of Paralympic spectators after the close of the Olympics, he added. The Olympics are scheduled to end on Aug. 8, with the Paralympics slated to start on Aug. 24.

Many survivors of the bombings have lasting injuries and illnesses linked to the bombs and radiation exposure and faced discrimination in Japanese society. The government began to medically support certified survivors in 1968 after more than 20 years of effort by the survivors.

As of March, 127,755 survivors, whose average age is now almost 84, are certified as hibakusha and eligible for government medical support, according to the health and welfare ministry. Suga announced last month the medical benefits would be extended to 84 Hiroshima survivors who had been denied aid because they were outside a government-set boundary.

The victims were exposed to radioactive "black rain” that fell in the city after the bombing and fought a long legal battle for their health problems to be recognized. Matsui urged Suga's government to further widen support and have generous assistance quickly reach all those still suffering physical and emotional effects of radiation, including the black rain survivors who were not part of the lawsuit.

Thursday’s ceremony at the Hiroshima Peace Memorial Park was significantly scaled down because of the coronavirus pandemic and was also eclipsed by Tokyo 2020, where even national NHK television quickly switched to the games after the main speeches.

International Olympic Committee (IOC) chief Thomas Bach made a trip to Hiroshima before the Games began, to mark the start of an Olympic truce that urges a halt to fighting worldwide to allow the safe passage of athletes.

But organizers stopped short of granting a request from bomb survivors and the city for athletes to join a minute of silent prayer on Friday morning.

In a letter, Bach said the Olympic closing ceremony would include time to honor victims of tragedy throughout history.

"It is disappointing, even though we appreciate that Bach visited Hiroshima to learn the reality of bomb victims," he said.

Bach's visit itself was controversial, with more than 70,000 people signing a petition opposing the trip and accusing him of seeking "to promote the Olympics... even though it is being forced through despite opposition".

Yoko Sado, 43, who was strolling around the peace memorial park with her seven-year-old son, said the pandemic had robbed Hiroshima of a chance to spread a message of peace.

"If it were not for the pandemic, many people who would have attended the Tokyo Olympics could have had visited this park and see the exhibitions," she told AFP. "I'm a bit disappointed... It would have been a great opportunity."

This year's ceremony is the first since an international treaty banning nuclear weapons entered into force last year when a 50th country ratified the text. The treaty has not been signed by nuclear-armed states, but activists believe it will have a gradual deterrent effect.