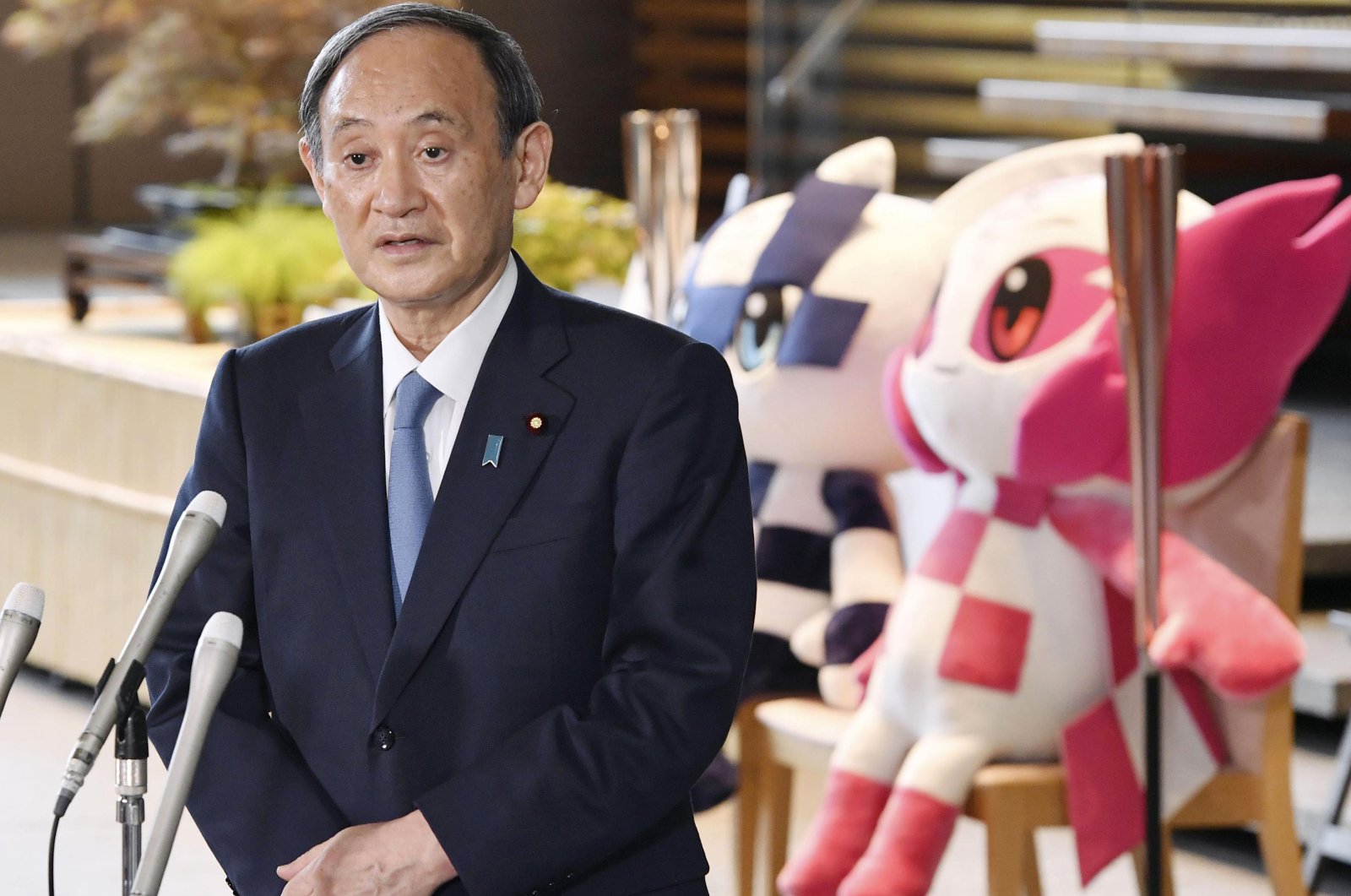 Japan's Prime Minister Yoshihide Suga speaks to the media in front of the Olympics mascots at the prime minister's office in Tokyo, July 1, 2021. (AP Photo)
by REUTERS Jul 26, 2021 9:59 am
RECOMMENDED

Despite millions of Japanese enjoying the Olympics opening ceremony and cheering on their athletes from their homes, the shadow of COVID-19 has sent Prime Minister Yoshihide Suga's popularity in a downward spiral ahead of this year's election.

Nearly two-thirds of respondents said the country's rollout of coronavirus vaccinations was not going well.

The program has been hampered by a slow start and supply snarls, and less than a quarter are fully vaccinated.

Suga's dream scenario had been to contain the virus outbreak, preside over a successful Games and call a general election. That was upended after a surge in COVID-19 infections led to a fourth state of emergency in Tokyo and forced Olympic organizers to ban spectators from almost all venues.

Japan has had some cheering news from the Games, taking a total of six gold medals – including a historic two in judo by Uta Abe and her brother Hifumi on Sunday, as well as one silver and one bronze medal.

Yiannis Exarchos, CEO of Olympic Broadcasting Services, said the opening ceremony was watched by more than 70 million people in Japan, making it the most-watched event in the last decade.

Organizers were keeping a wary eye on tropical storm Nepartak, which was heading toward Japan's east coast and forecast to pass to the north of Tokyo.

They said there was currently no plan to reschedule further events. Tuesday's rowing program was disrupted, with races rescheduled for later in the week. Monday's rowing events were moved to Sunday in anticipation of the storm.

Many Japanese fear the influx of athletes and officials for the global sporting event will add to the surge in infections, and 31% in the Nikkei survey said the Games should be canceled or postponed again.

Some 56% said Japan's border steps for incoming Olympics athletes and officials were "inappropriate," the Nikkei survey showed. The Games are being held under tight quarantine rules to prevent the spread of infections, but a number of cases have emerged involving athletes and others.

The Dutch rowing team's performance director said the team had agreed to separate itself from other competitors after one of its athletes, a coach and a staff member all tested positive for COVID-19.

A strict "playbook" setting out rules to avoid contagion mandates frequent testing for the virus, restricted movements and wearing masks by athletes and others in most situations.

The International Olympic Committee said on Sunday, however, that athletes can briefly take off their masks on the podium for 30 seconds for a photo opportunity, as several did after their wins on the day.

Japanese residents have been encouraged to watch the Games on TV but fans assembled at the open-air triathlon route on the island of Odaiba in Tokyo Bay, on Monday in defiance of Olympic staff carrying signs asking them not to gather.

Commenting on his soggy support, Suga told monthly magazine Hanada, "I am confident what I am doing is not mistaken. That will not waver," Kyodo reported.

Independent analyst Atsuo Ito said public admiration for Olympic athletes was unlikely to translate into higher ratings for Suga, which will probably depend on trends in infections.

"Even if people applaud the athletes' performances, that will not link to Suga's support rate," Ito said.

Suga's term as ruling Liberal Democratic Party (LDP) president expires in September and an election for parliament's powerful lower house must be held by November.

Suga came in fifth in Nikkei's survey of preferred next prime ministers, with just 5% backing him.

Taro Kono, the minister in charge of the vaccine rollout, topped the list but his rating slipped four points to 19%, virtually tied with former Defense Minister Shigeru Ishiba.