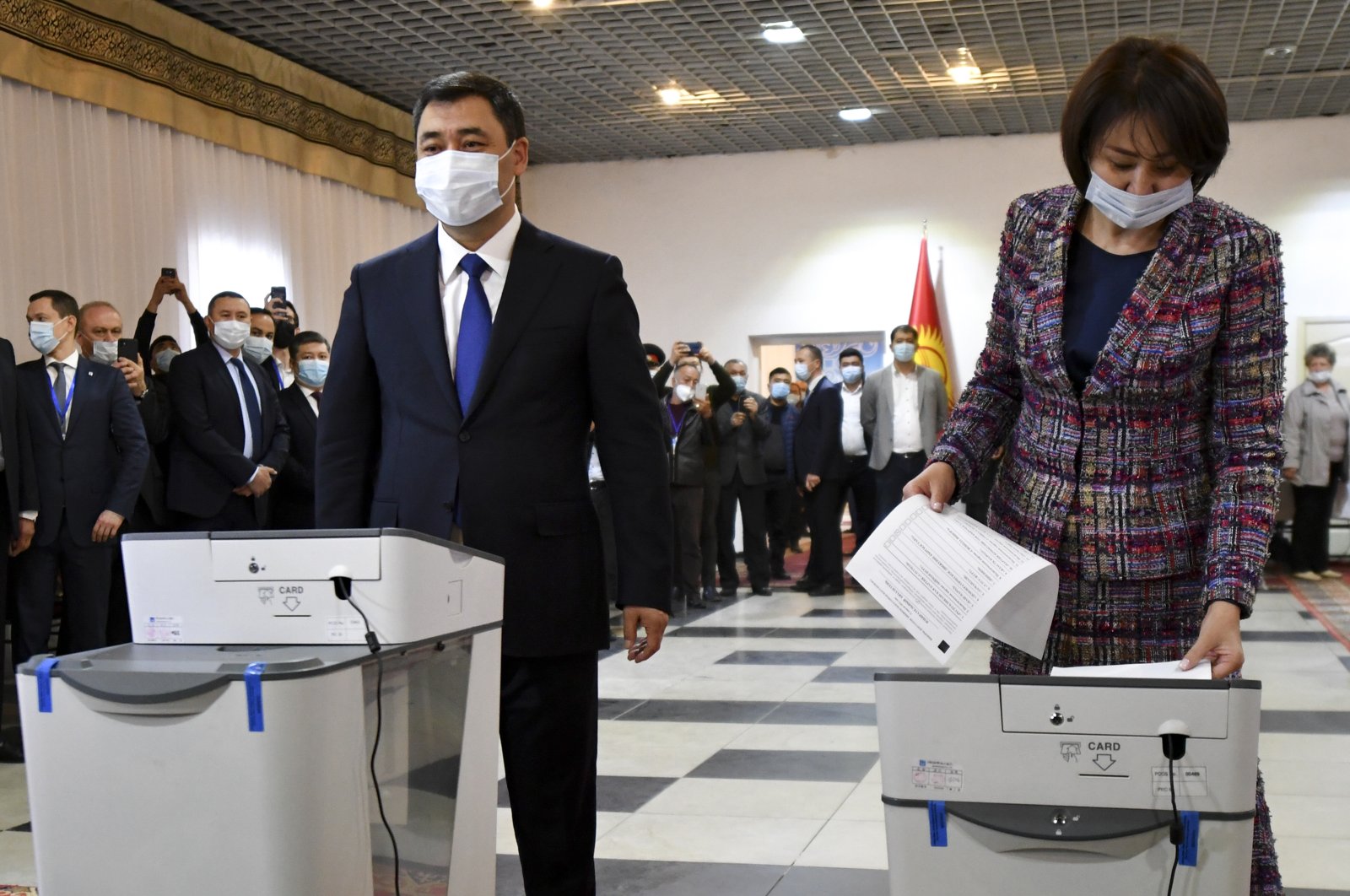 Kyrgyzstan's President Sadyr Japarov and his wife Aigul Asanbaeva cast their ballots at a polling station during the referendum in Bishkek, Kyrgyzstan, April 11, 2021. (AP Photo)
by Reuters Apr 11, 2021 7:13 pm
RECOMMENDED

Kyrgyzstan voted in a national referendum on Sunday and exit polls showed that despite low turnout there was strong support for the decision to allocate the office of the presidency greater powers.

The constitutional reform will bring the political system of the Central Asian nation closer to that of its ex-Soviet neighbors, such as Kazakhstan and Uzbekistan, making it easier for head of state Sadyr Japarov to push through his policies.

Japarov and his supporters also hope a strengthened presidency will make the country more stable after violent revolts toppled its leaders in 2005, 2010 and in 2020, when Japarov was catapulted from a prison cell and into office.

Preliminary Central Election Commission data based on 75% of ballots found a majority of voters, 79%, supported the reform, although total turnout was just above the 30% threshold required to make the referendum valid.

A poll commissioned by the United States-based International Republican Institute and published this month found Japarov was by far the most trusted politician in the country, which shares a border with China and is allied with Russia.

The percentage of voters who believed Kyrgyzstan was heading in the right direction jumped from 41% last August, when Japarov's predecessor Sooronbai Jeenbekov was in charge, to 70% in February and March, the poll data showed.

Japarov proposed the reform after being swept to power last October by violent protests that were triggered by the announcement of pro-Jeenbekov parties' landslide victory in a parliamentary election.

A former member of parliament and senior official, Japarov had been serving a prison term for his role in the kidnapping of a regional governor as part of a political protest. His sentence has since been overturned.

In contrast to its neighbors, when Kyrgyzstan gained independence from the Soviet Union in 1991, it adopted a political system that allowed both parliament and the presidency to wield significant powers, forcing its leaders to seek the backing of broader elites.

"I voted against (the reform) because this is a power grab," said a 32-year-old entrepreneur who only gave his first name, Bakyt. "All the power must not be given to one person."

Another businessperson, Turdubek, said he believed the reform was for the better.

"I am no specialist in legislation, but I trust the specialists who drafted the new constitution. They too want a better life for the people."