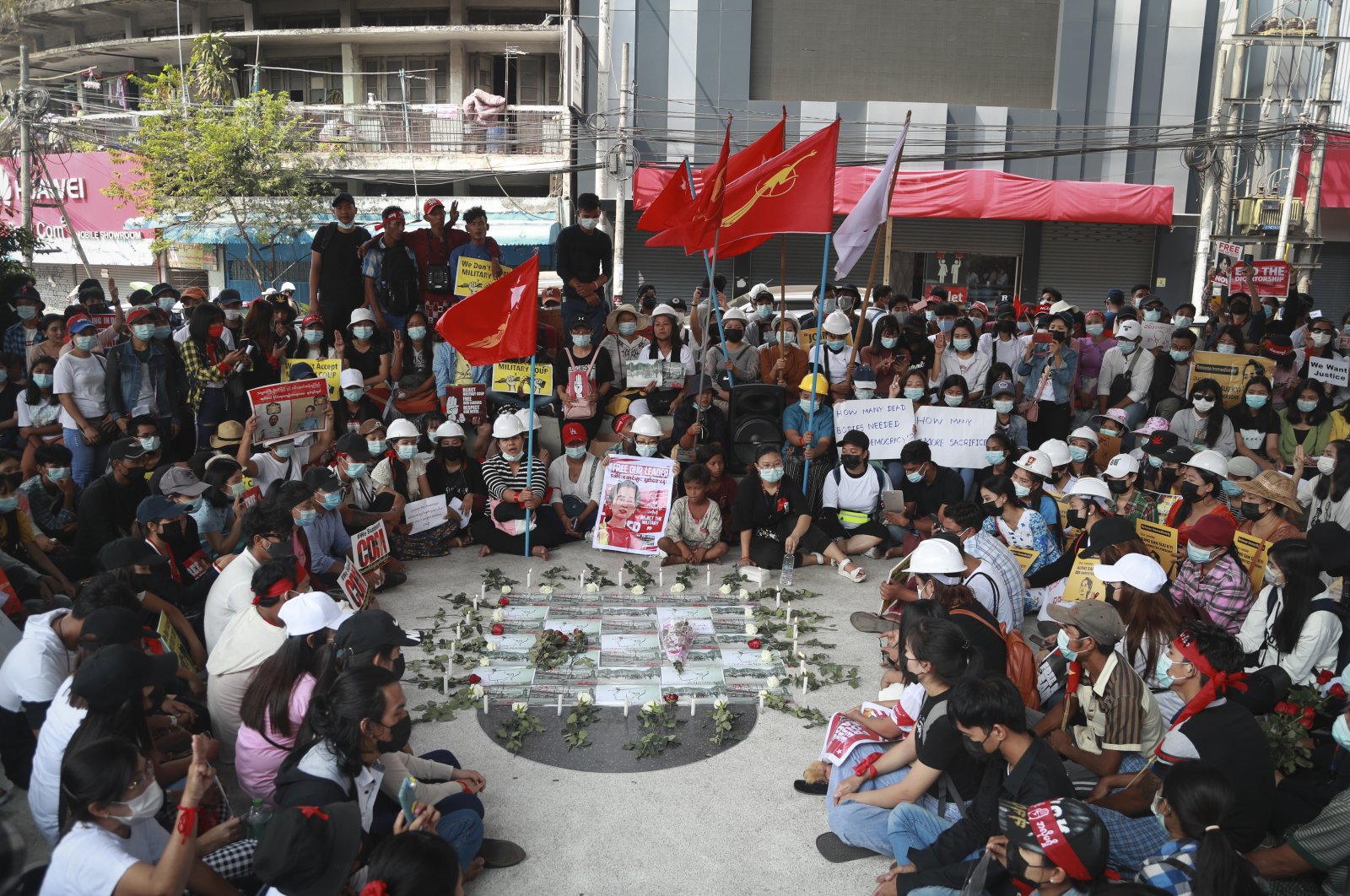 Protesters gathered again Sunday all over Myanmar, a day after security forces shot dead two people at a demonstration in the country’s second-biggest city. A funeral was also held for a young woman killed earlier by police.

Mya Thwet Thwet Khine was the first confirmed death among the many thousands who have taken to the streets to protest the Feb. 1 coup that toppled the elected government of Aung San Suu Kyi. The woman was shot on Feb. 9, two days before her 20th birthday, at a protest in the capital Naypyidaw and died Friday.

About 1,000 people in cars and bikes gathered Sunday morning at the hospital where her body was held amid tight security, with even the victim's grandparents who had traveled from Yangon, five hours away, denied entry. When her body was released, a long motorized procession began a drive to the cemetery.

In Yangon, Myanmar's biggest city, about 1,000 demonstrators honored the woman under an elevated roadway.

"I want to say through the media to the dictator and his associates, we are peaceful demonstrators," said protester Min Htet Naing. "Stop the genocide! Stop using lethal weapons!”

Another large protest took place in Mandalay, where police shot dead two people on Saturday near a dockyard as security forces were trying to force workers to load a boat.

The workers – like railway personnel, truckers and many civil servants – have been taking part in a civil disobedience campaign against the junta. Shooting broke out after neighborhood residents rushed to the Yadanabon dock to try to assist the workers in their resistance. One of the victims, described as a teenage boy, was shot in the head and died immediately, while another was shot in the chest and died en route to a hospital. Several other serious injuries were also reported.

United Nations Secretary-General Antonio Guterres condemned the use of "deadly violence" in the melee.

"The use of lethal force, intimidation and harassment against peaceful demonstrators is unacceptable," Guterres said, according to remarks carried by Agence France-Presse (AFP).

British Foreign Secretary Dominic Raab wrote on Twitter that the shooting of peaceful protesters is "beyond the pale.”

"We will consider further action, with our international partners, against those crushing democracy and choking dissent,” Raab added.

Britain last week froze the assets of and imposed travel bans on three top Myanmar generals, adding to already existing targeted sanctions. Singapore, which together with Myanmar is part of the 10-member Association of Southeast Asian Nations, issued a statement condemning the use of lethal force as "inexcusable.”

Urging "utmost restraint” on the part of security forces, it warned that "if the situation continues to escalate, there will be serious adverse consequences for Myanmar and the region.”

Another shooting death took place Saturday night in Yangon in unclear circumstances. According to several accounts on social media, including a live broadcast that showed the body, the victim was a man who was acting as a volunteer guard for a neighborhood watch group.

Such gatherings were established because of fears that authorities were using criminals released from prison to spread panic and fear by setting fires and committing violent acts.

Another live broadcast on Facebook showed the wife of actor Lu Min describing to neighbors how her husband was arrested and taken away from their home shortly after midnight. He was one of six high-profile people in the entertainment industry charged last week with inciting civil servants to stop work and join the protest movement, which he and the others have publicly championed, as The Associated Press (AP) reported.

On Sunday, Facebook announced it took down the page run by the Myanmar military information unit "for repeated violations of our community standards prohibiting incitement of violence and coordinating harm.” It had already taken down other accounts linked to the military. The junta took power after detaining Suu Kyi and preventing Parliament from convening, saying elections last November were tainted by voting irregularities.

The election outcome, in which Suu Kyi’s National League for Democracy party won by a landslide, was affirmed by an election commission that has since been replaced by the military.

The junta says it will hold new elections in a year’s time. The coup was a major setback to Myanmar's transition to democracy after 50 years of army rule that began with a 1962 coup.

Suu Kyi came to power after her party won a 2015 election, but the generals retained substantial power under the constitution, which was adopted under a military regime.