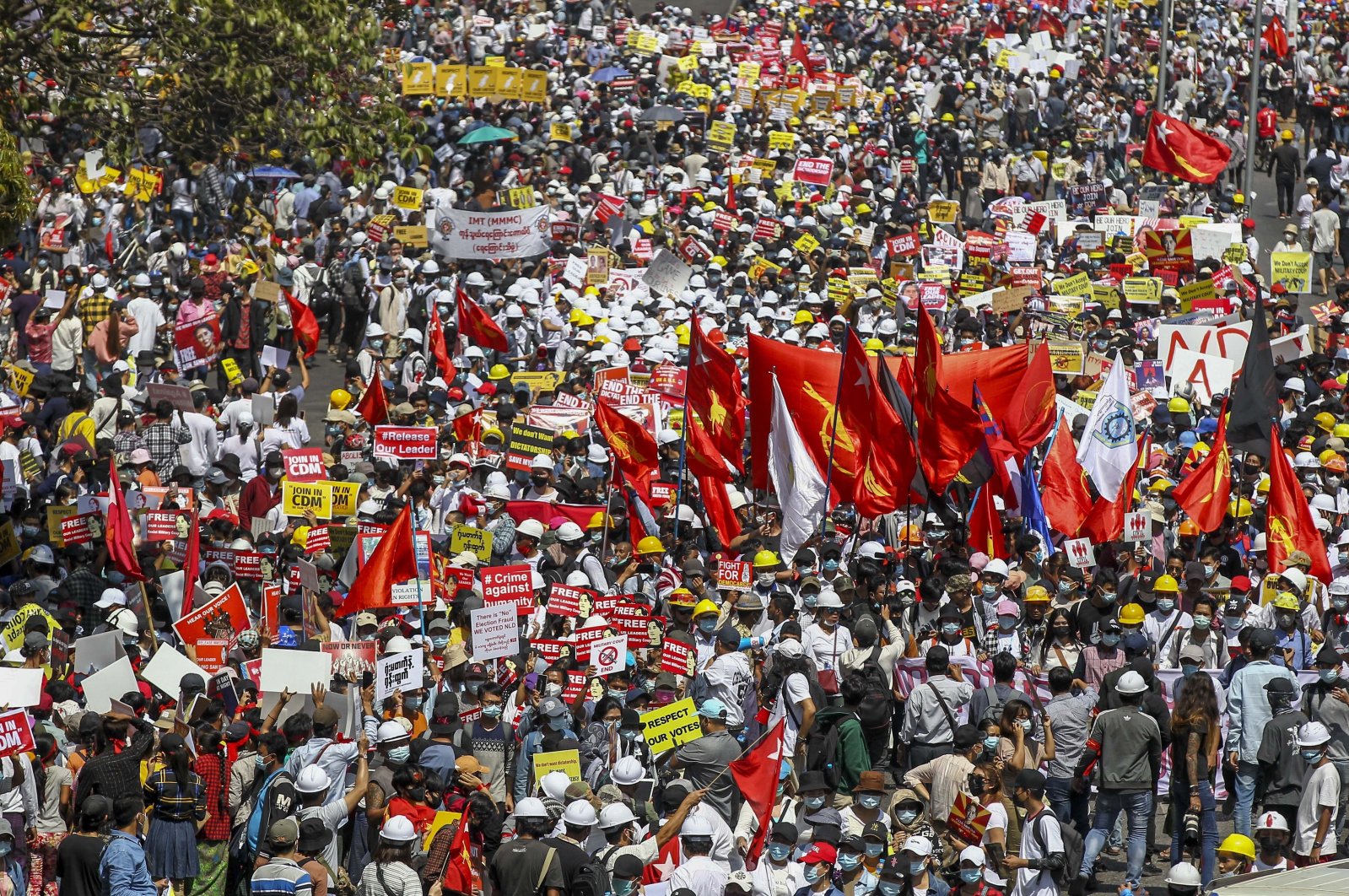 Demonstrators gather at an intersection close to Sule Pagoda to protest against the military coup in Yangon, Myanmar, Feb. 17, 2021. (AP Photo)
by Agencies Feb 17, 2021 10:28 am
RECOMMENDED

Myanmar's anti-coup protesters returned to the streets in force Wednesday in the biggest street demonstrations since troops fanned out across the country to quell opposition to the new military junta.

Thousands of people rallied in Yangon, the nation's biggest city, with protesters blockading roads with vehicles to stop security forces from moving around the commercial capital. Much of the country has been in open revolt since troops deposed Nobel laureate Aung San Suu Kyi's government at the start of the month and charged her under an obscure import law.

Wednesday's crowds came in defiance of more violent efforts by the regime to bring resistance to heel, following nationwide street protests and a disobedience campaign encouraging civil servants to strike.

"We have to fight until the end," Nilar, a 21-year-old student who asked not to use her real name, told Agence France-Presse (AFP). "We need to show our unity and strength to end military rule. People need to come out on the streets."

Demonstrations over the past two days had been noticeably smaller since troops were deployed around Yangon over the weekend. But social media platforms were flooded with calls for a show of force by protesters in the hours before the junta imposed a third consecutive overnight internet blackout.

U.N. Special Rapporteur Tom Andrews warned that reports of soldiers being brought into Yangon could lead to the situation there spiraling out of control.

"I fear that Wednesday has the potential for violence on a greater scale in Myanmar than we have seen since the illegal takeover of the government on February 1," Andrews said in a statement. "We could be on the precipice of the military committing even greater crimes against the people of Myanmar."

There were no signs of a strong troop presence mobilized in Yangon on Wednesday morning. In recent days rubber bullets, tear gas and even slingshots have been used against protesters. One young woman remains in critical condition in the capital Naypyitaw after being shot in the head last week.

The military said a police officer had died in Mandalay after a confrontation with protesters Sunday.

"Those who committed lawless action on the police officer will be dealt with as necessary," an army statement said.

The military justified its power seizure by alleging widespread voter fraud in November elections won by Suu Kyi's party in a landslide.

After her detention in a dawn raid on Feb. 1, Suu Kyi was charged for having unregistered walkie-talkies found in her home.

The Nobel laureate's lawyer told AFP on Tuesday she had been hit with a second charge, of violating the country's disaster management law. Further details of the new charge have not been made public.

The disaster management law has also been used against deposed President Win Myint for an election campaign event that the junta claims broke coronavirus restrictions. Khin Maung Zaw added that Suu Kyi and Win Myint, both of whom he has yet to have any contact with, were expected to appear via video link during a March 1 trial. But he said there were signs Suu Kyi had already made an appearance in court on Tuesday, without his presence. Andrews described the court proceedings as a "secretive trial."

Military spokesperson Zaw Min Tun said Tuesday that both Suu Kyi and Win Myint were in a "safer place" and "in good health."

"It's not like they were arrested – they are staying at their houses," the general told a news conference.

Protesters are deeply skeptical of the junta's assurances, given at a news conference on Tuesday, that there would be a fair election and it would hand over power, even as police filed an additional charge against Suu Kyi.

"We're showing here that we're not in that 40 million they announced," Sithu Maung, an elected member of Suu Kyi's National League for Democracy (NLD) told a cheering crowd at the Sule Pagoda, a central protest site in the main city of Yangon, as Reuters reported.

Meanwhile, Min Tun told the Tuesday news conference that 40 million of the 53 million population supported the military's action, which he said was in line with the constitution.

More than 450 people have been arrested since the coup, according to the Assistance Association for Political Prisoners monitoring group. There are unconfirmed reports of many other arrests. Western powers and the U.N. have repeatedly condemned the leaders of Myanmar's new military administration, which insists it took power lawfully.

China had initially not criticized the coup, which Chinese state media described as a "cabinet reshuffle." However, Beijing's ambassador to Myanmar said Tuesday that the current situation in the country was "absolutely not what China wants to see." So far, only Washington has announced targeted sanctions against the generals, calling on them to relinquish power.