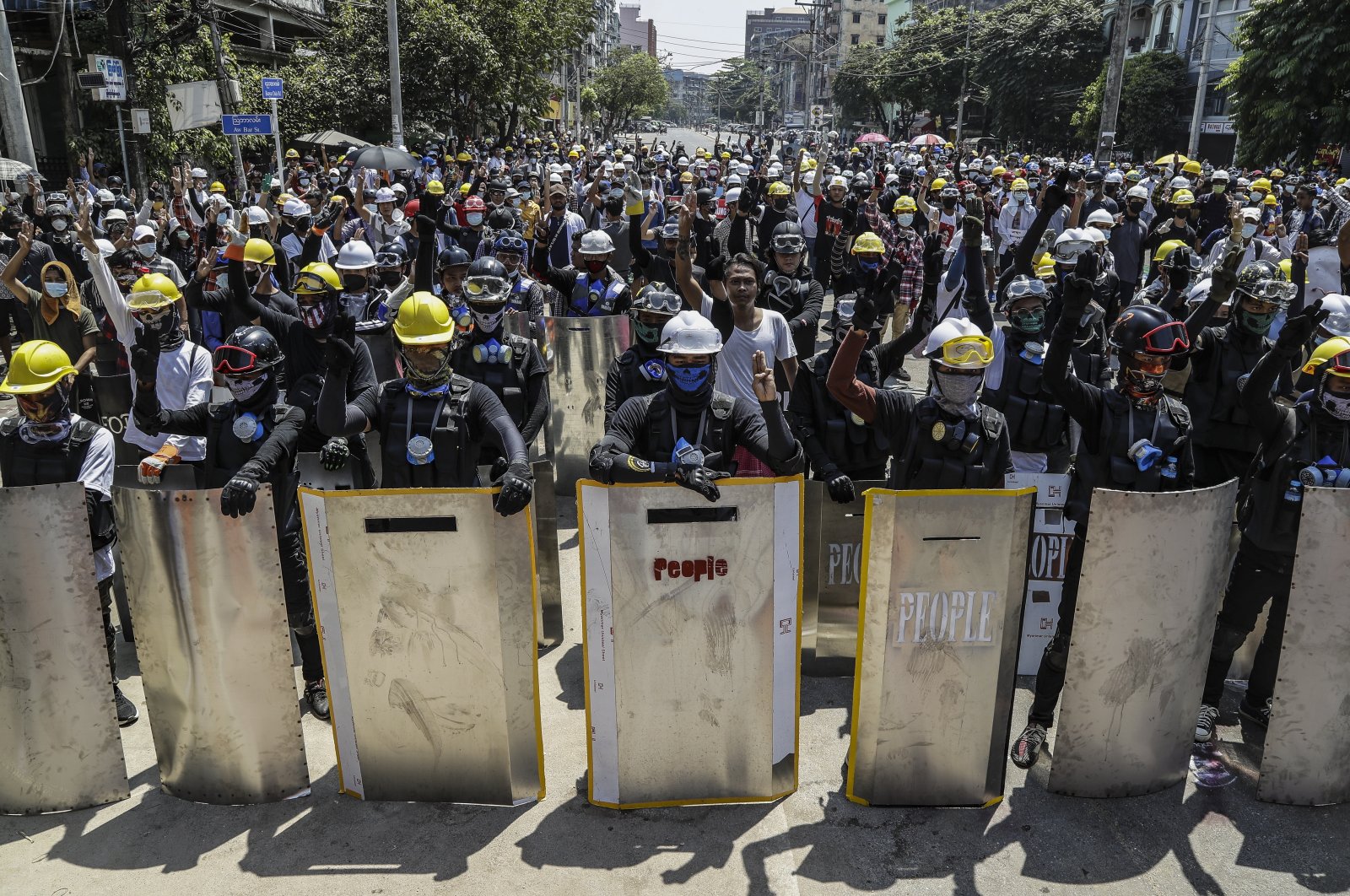 Two demonstrators were killed by gunshot wounds to the head in Myanmar Monday, witnesses said, while demonstrators across the country sought to paralyze the economy with a strike.

Shops, factories and banks were largely closed in the main city Yangon in protests against the country's military rulers, following a weekend of night raids and arrests.

Security forces were also deployed at hospitals and universities as part of efforts to enforce the law, state media said.

It was not immediately clear who fired on the protesters in the northern town of Myitkyina, although both police and the military were at the scene, the witnesses said.

Photos posted on Facebook showed the bodies of two men lying on the street. Witnesses said they were taking part in a protest against the coup when police fired stun grenades and tear gas. Several people were then hit by gunfire from nearby buildings.

One witness, who said he helped move the bodies, told Reuters two people were shot in the head and died on the spot. Three people were wounded.

"How inhumane to kill unarmed civilians," said the witness, a 20-year-old man. "We must have our right to protest peacefully."

At least nine unions covering sectors including construction, agriculture and manufacturing have called on "all Myanmar people" to stop work to reverse the coup and restore Suu Kyi's government.

Allowing business and economic activity to continue would help the military "as they repress the energy of the Myanmar people," the unions said in a statement and added, "The time to take action in defense of our democracy is now."

Only a few small tea-shops were open in Yangon, witnesses said. Shopping centers were closed and there was no work going on at factories.

Police and military have killed more than 50 people to quell the daily demonstrations and strikes against the Feb. 1 coup, according to the United Nations.

A military spokesman did not respond to calls asking for comment on the latest incidents.

Myanmar has been in turmoil since the army overthrew the elected government of longtime democracy champion Aug Sang Suu Kyi, detained her and other political figures, and installed a military government.

The generals say they acted because an election in November that saw Suu Kyi's National League for Democracy (NLS) secure a big victory was marred by fraud, a claim rejected by the electoral commission.

They have promised to hold another election, without giving a date. In the meantime, security forces have cracked down hard on widespread pro-democracy protests, with last week the bloodiest so far in a country that has a history of military rule and crushing of dissent.

On Monday, demonstrators gathered in Yangon and the second-biggest city Mandalay and several other towns, according to several videos posted on social media.

Protesters in Dawei, a coastal town in the south, were protected by the Karen National Union, an ethnic armed group engaged in a long-running war with the military.

In some places, they waved flags fashioned from htamain (women's sarongs) or hung them up on lines across the street to mark International Women's Day while denouncing the junta. Walking beneath women's sarongs is traditionally considered bad luck for men.

Witnesses reported sounds of gunfire or stun grenades in many districts of Yangon after nightfall as soldiers set up camp in hospitals and university compounds. It was not clear whether anyone was hurt.

"The army just started shooting," a businessman who lives near a Yangon hospital told Reuters. He said he was staying at home with his family. "We cannot go out, we cannot go to work, or even leave. We are not safe, but we cannot go out."

The international Physicians for Human Rights (PHR) organization protested against the occupation of the hospitals, which it said was a violation of international law.

"This widespread siege of hospitals follows several days of prominent civilian injuries and casualties and can be interpreted as a direct attempt to impede access to care for civilians. It is also a threat to attending medics to warn them against further treating injured protestors," the New York-based PHR said in a statement.

Police in the Pabedan district of Yangon, where Khin Maung Latt was arrested on Saturday night, declined to comment. A spokesman for the military did not answer calls seeking comment.

The army has said it is dealing with protests lawfully.

Figures by the Assistance Association for Political Prisoners advocacy group showed nearly 1,800 people have been detained under the junta as of Sunday.

An announcement by the military carried on the front page of the state-run Global New Light of Myanmar newspaper on Monday threatened unspecified action against anyone who directly or indirectly works for a committee of ousted lawmakers that has declared itself the country's legitimate authority.

The announcement said the committee was illegal and had committed "high treason."

The killings have drawn anger in the West and been condemned by most democracies in Asia.

The United States and some other Western countries have imposed limited sanctions on the junta and Australia on Sunday cut defense ties, saying it would only deal with non-government groups in Myanmar.

Neighbouring China said Sunday it was prepared to engage with "all parties" to ease the crisis and was not taking sides.

In Sweden, H&M HMb.ST, the world's second-biggest fashion retailer, said it had paused placing orders with its direct suppliers in Myanmar.

H&M said it was shocked by the use of deadly force against protesters, but also that the unpredictable situation had caused difficulties in its manufacturing and transport operations.

So far, however, the military has brushed off international condemnation of its actions and is digging in to weather the crisis, as it has in past periods of military rule.