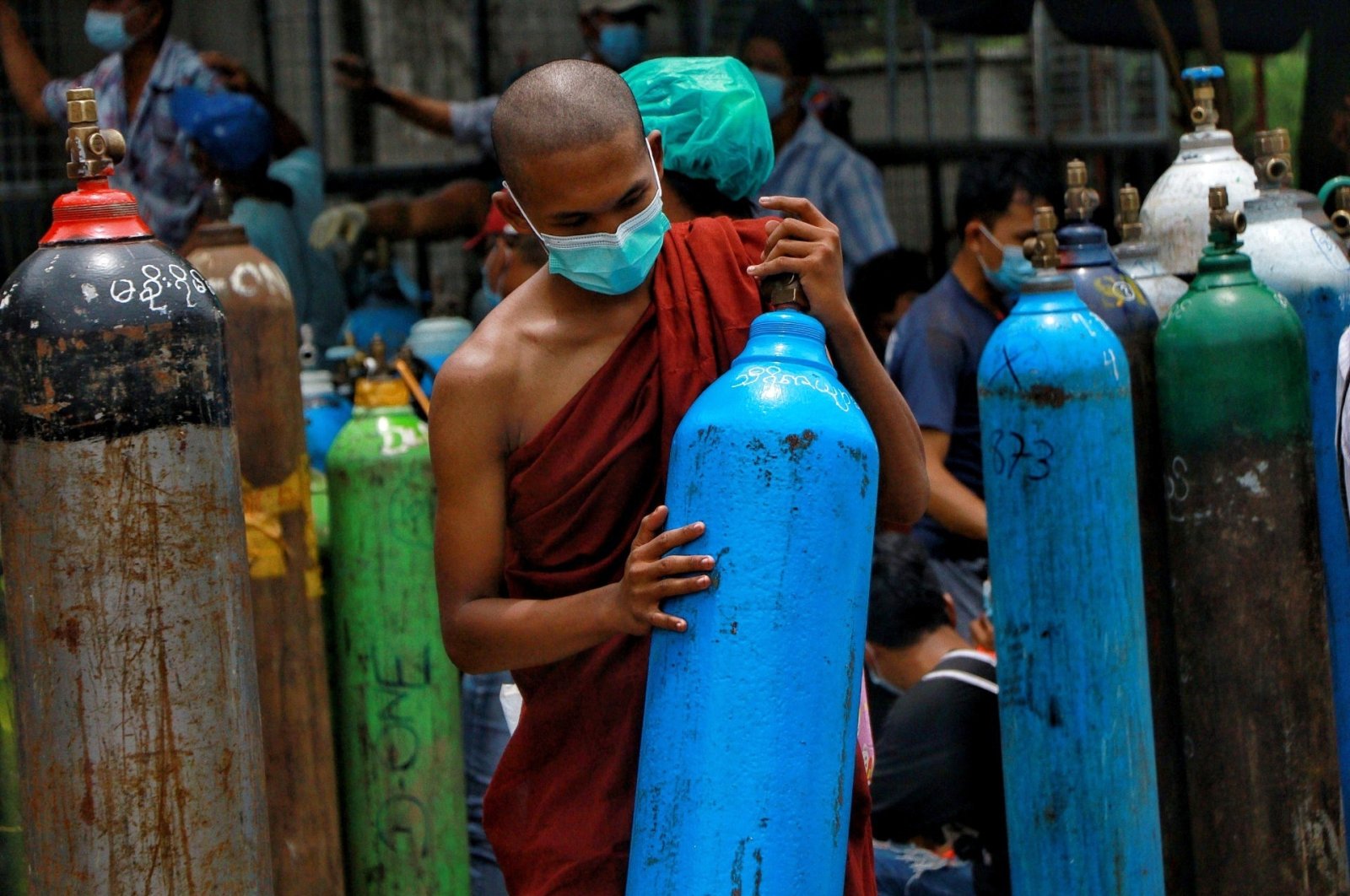 With COVID-19 deaths rising in Myanmar, allegations are growing from residents and human rights activists that the military government, which seized control in February, is using the pandemic to consolidate power and crush opposition.

In the last week, the per capita death rate in Myanmar surpassed those of Indonesia and Malaysia to become the worst in Southeast Asia. The country’s crippled health care system has rapidly become overwhelmed with new patients sick with COVID-19.

Supplies of medical oxygen are running low, and the government has restricted its private sale in many places, saying it is trying to prevent hoarding. But that has led to widespread allegations that the stocks are being directed to government supporters and military-run hospitals. At the same time, medical workers have been targeted after spearheading a civil disobedience movement that urged professionals and civil servants not to cooperate with the government, known as the State Administrative Council (SAC).

"They have stopped distributing personal protection equipment and masks, and they will not let civilians who they suspect are supporting the democracy movement be treated in hospitals, and they’re arresting doctors who support the civil disobedience movement,” said Yanghee Lee, the U.N.'s former Myanmar human rights expert and a founding member of the Special Advisory Council for Myanmar.

"With the oxygen, they have banned sales to civilians or people who are not supported by the SAC, so they’re using something that can save the people against the people," she said. "The military is weaponizing COVID-19.”

Myanmar’s Deputy Information Minister Zaw Min Tun did not respond to questions about the allegations, but with growing internal and external pressure to get the pandemic under control, the leadership has been on a public relations offensive.

In the state-run Global New Light of Myanmar newspaper this week, several articles highlighted the government’s efforts, including what it called a push to resume vaccinations and increase oxygen supplies.

Senior Gen. Min Aung Hlaing, the military commander who heads the SAC, was cited as saying that efforts were also being made to seek support from the Association of Southeast Asian Nations and unspecified "friendly countries.”

"Efforts must be made for ensuring better health of the State and the people,” he was quoted as saying.

Myanmar reported another 342 deaths Thursday, and 5,234 new infections. Its seven-day rolling average of deaths per 1 million people rose to 6.29 - more than double the rate of 3.04 in India at the peak of its crisis in May. The figures in Myanmar are thought to be a drastic undercount due to a lack of testing and reporting.

"There is a big difference between the actual death toll from COVID-19 of the Military Council and reality,” a physician from the Mawlamyine General Hospital in Myanmar’s fourth-largest city told The Associated Press (AP), speaking on condition of anonymity for fear of government reprisal. "There are a lot of people in the community who have died of the disease and cannot be counted.”

Videos proliferate on social media showing apparent virus victims dead in their homes for lack of treatment and long lines of people waiting for what oxygen supplies are still available. The government denies reports that cemeteries in Yangon have been overwhelmed but announced Tuesday they were building new facilities that could cremate up to 3,000 bodies per day.

"By letting COVID-19 run out of control, the military junta is failing the Burmese people as well as the wider region and world, which can be threatened by new variants fueled by unchecked spread of the disease in places like Myanmar,” said Phil Robertson, deputy Asia director of Human Rights Watch (HRW).

"The problem is the junta cares more about holding on to power than stopping the pandemic.”

Myanmar is one of the region’s poorest countries and already was in a vulnerable position when the military seized power, triggering a violent political struggle. Under the civilian former leader Aung San Suu Kyi, Myanmar had weathered a COVID-19 surge last year by severely restricting travel and sealing off Yangon.

Vaccines were secured from India and China, but Suu Kyi's government was ousted less than a week after the first shots were given. As civil disobedience grew after Suu Kyi’s removal, public hospitals were basically closed as doctors and other staff refused to work under the new administration, instead running makeshift clinics for which they faced arrest, if caught.

Some have returned to public hospitals, but the Mawlamyine doctor interviewed by AP said it was too dangerous.

"I could be arrested by the junta anytime if I returned to the hospital,” added the doctor, who was part of the disobedience movement and has been treating patients with supplies he has scrounged.

According to Tom Andrews, the U.N. Human Rights Council’s independent expert on human rights in Myanmar, government forces have engaged in at least 260 attacks on medical personnel and facilities, killing 18. At least 67 health care professionals had been detained and another 600 are being sought.

Military hospitals kept operating after Suu Kyi's ouster but were shunned by many people and the vaccination program slowed to a crawl before apparently fizzling out completely until this week. There are no solid figures on vaccinations, but it’s believed that about 3% of the population could have received two shots.

"There is an urgent need for greater testing, contact tracing and COVID-19 vaccinations to help curb the pandemic,” he told AP. "This latest surge is a bitter blow to millions of people in Myanmar already coping with worsening economic and social hardships.”

Earlier this week, Andrews urged the U.N. Security Council and member states to push for a "COVID-19 cease-fire.” "The United Nations cannot afford to be complacent while the junta ruthlessly attacks medical personnel as COVID-19 spreads unchecked,” he said. "They must act to end this violence so that doctors and nurses can provide lifesaving care and international organizations can help deliver vaccinations and related medical care.”

After a long lull in humanitarian aid, China recently began delivering vaccines. It sent 736,000 doses to Yangon this month, the first of 2 million being donated, and reportedly more than 10,000 to the Kachin Independence Army, which has waged a decadeslong insurgency in a northern border area where the virus has spilled over into China. Chinese Foreign Ministry spokesperson Zhao Lijian declined to comment directly earlier this week on the report of the delivery to the KIA, noting instead "the epidemic is a common enemy to all mankind.”

The Global New Light reported Myanmar received another 1 million doses purchased from China. COVID-19 outbreaks have been reported as widespread in Myanmar’s prisons. On Wednesday, state-run MRTV television showed what it said were 610 prisoners from Yangon's Insein Prison being vaccinated.

The report was met with skepticism and derision on social media. Lee said if the government is trying to use vaccines and other aid to its advantage by positioning itself as the solution to the pandemic, it's too late.

"The people know now and it’s been too long,” she said. "COVID-19 was not manmade but it got out of proportion because of complicity and deliberate blockage of services – there’s no going back.”