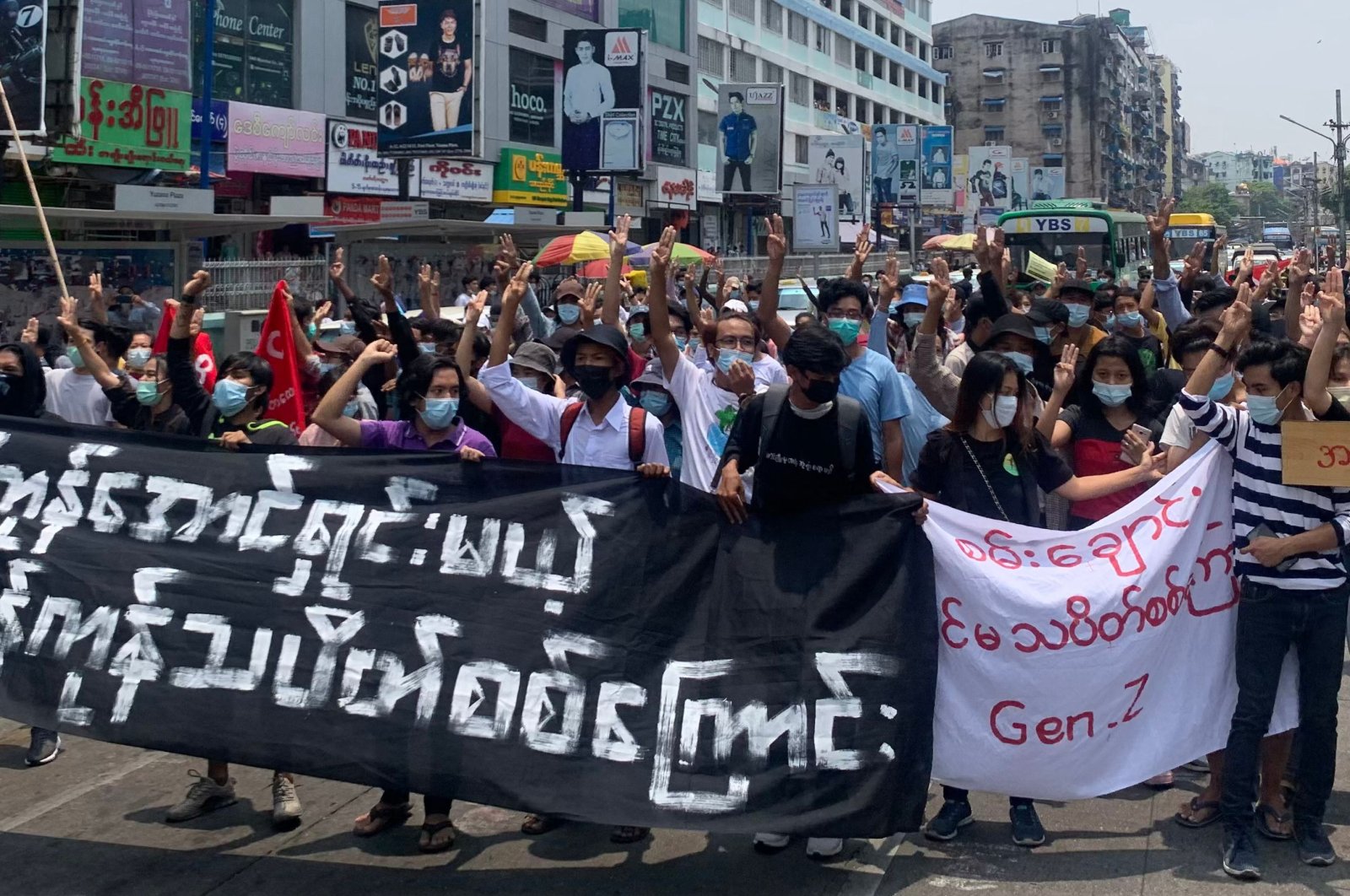 Protesters hold up the three-finger salute as they take part in a demonstration against the military coup in Tarmwe township in Yangon, Myanmar, April 26, 2021. (AFP Photo)
by Agencies Apr 26, 2021 9:41 am
RECOMMENDED

Myanmar’s anti-coup protesters Monday started a non-compliance campaign, asking people to keep their children from attending school and stop paying electricity bills and agricultural loans, days after the top general's pledge at a regional summit to end the post-coup crisis.

Scattered protests took place in Myanmar's big cities on Sunday, a day after Senior Gen. Min Aung Hlaing reached an agreement, at a summit of the Association of Southeast Asian Nations (ASEAN) in Indonesia.

The junta chief did not submit to calls for the release of political prisoners, including the leader of the ousted civilian government, Aung San Suu Kyi, and the ASEAN accord lacked any timeline for ending the crisis.

An estimated 750 people have been killed by security forces, as Myanmar's generals unleashed lethal force in the face of sustained protests against their Feb. 1 coup. Reuters is unable to confirm the death toll, as the junta has significantly curbed media freedoms, and many journalists have been detained. The coups also led to the displacement of around 250,000 people.

A civil disobedience campaign of strikes has crippled the economy and raised the prospect of hunger, international aid agencies have warned.

Pro-democracy activists have called for an intensification of their effort from Monday by refusing to pay electricity bills and agricultural loans, and for children to stop going to school.

"All of us, people in townships, wards and then regions and states must work together to make a successful boycott against the military junta," activist Khant Wai Phyo said in a speech at a protest in the central town of Monywa on Sunday.

"We don't participate in their systems, we don't cooperate with them.”

A spokesman for the junta did not answer calls seeking comment.

Activists criticized a five-point agreement that came out of the ASEAN meeting, to end violence, start a dialogue among all parties, accept aid, and appoint a special ASEAN envoy who would be allowed to visit Myanmar.

The agreement did not mention political prisoners although the statement said the meeting heard calls for their release.

On Monday, Myanmar's junta again postponed court proceedings against deposed leader Suu Kyi, her lawyers said, as they fight for permission to visit her 12 weeks after she was detained.

Suu Kyi has been under house arrest, with the junta charging her under six cases – including for sedition and having unlicensed walkie-talkies.

But movement on her case was once again delayed until May 10, her lawyer Min Min Soe said Monday after a hearing.

Twelve weeks since Suu Kyi was detained, Min Min Soe said they still have not received permission to meet their client face-to-face – one of many hurdles the team has faced.

"When the judge asked (police) which stage they have reached, they replied they couldn't tell specifically," she told Agence France-Presse (AFP), adding that Suu Kyi was frustrated by the slow pace.

"I think she is not getting access to watch news and TV. I do not think she knows the current situation happening in the country," she said.

Besides not being able to meet with Suu Kyi, junta-imposed mobile data shutdowns have also prevented videoconferencing in previous hearings.

The most serious charge Suu Kyi faces falls under Myanmar's official secrets law, with a hearing due in Yangon on May 6.

She won the Nobel Peace Prize in 1991 and has led Myanmar’s struggle against military rule for decades. But her reputation was seriously damaged by a deadly military crackdown on the country's Rohingya minority. The 2017 crackdown during her rule, killed 24,000 Rohingya, displaced nearly 1 million to neighboring Bangladesh while another 600,000 remain in Myanmar's southwestern Rakhine state.

She won a second term in November and even though the election commission said the vote was fair, the military, whose candidates suffered humiliating defeats, alleged it was a fraudulent election.