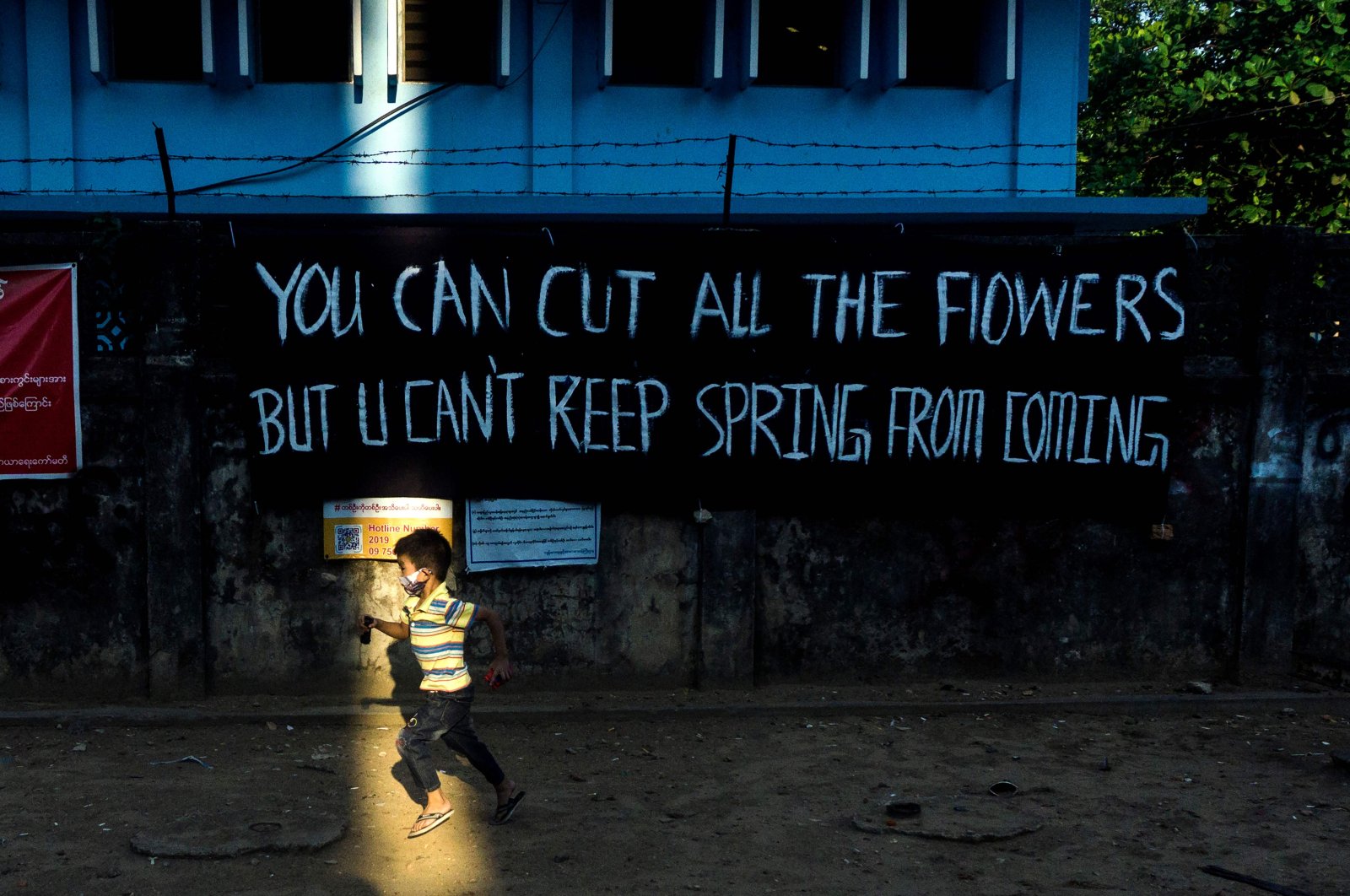 Children play with toy guns next to a banner put up by activists in protest against the military coup in Yangon, Myanmar, on April 11, 2021. (AFP Photo)
by French Press Agency - AFP Apr 11, 2021 9:44 pm
RECOMMENDED

Retaliating against the junta's internet crackdown and attempts to suppress information, Myanmar youth are secretly distributing an underground printed newspaper throughout their communities.

For 56 days straight there have been internet outages in coup-hit Myanmar, according to monitoring group NetBlocks.

The country has been in turmoil since democratically-elected leader Aung San Suu Kyi was ousted in a Feb. 1 coup, triggering a mass uprising that has resulted in a brutal security crackdown and more than 700 civilian deaths.

Thirty-year-old Lynn Thant, not his real name, started the underground newsletter and gave it the edgy name Molotov to appeal to young people.

"This is our response to those who slow down the flow of information – and that's a threat to us," he told Agence France-Presse (AFP).

Thousands of readers across the country are downloading the PDF version of the publication and printing out and distributing physical copies across neighborhoods in Yangon, Mandalay and other areas.

Lynn Thant is conscious of the risks involved.

Police and soldiers have arrested more than 3,000 people since the coup, according to local monitoring group Assistance Association for Political Prisoners.

Two hundred high-profile celebrities including actors, singers and social media influencers are on an arrest warrant list and could face three years in jail if convicted of spreading dissent against the military.

"If we write revolutionary literature and distribute it like this, we could end up in prison for many years," he said, his face concealed by one of the Guy Fawkes masks popularized by the dystopian movie "V for Vendetta."

He said the publication had a reach of more than 30,000 people on Facebook so far and the main audience was Generation Z activists.

Copies of the newsletter are also being distributed under the radar at produce markets.

Myanmar lived under military rule for 49 years before it transitioned to democracy in 2011.

The country has a long history of underground publications attempting to circumvent junta suppression.

Independent media is under threat, with 64 journalists arrested since the coup and 33 still in detention, according to monitoring group Reporting ASEAN.

The junta has also revoked the licenses of five media outlets and hired a lobbyist to explain the situation.