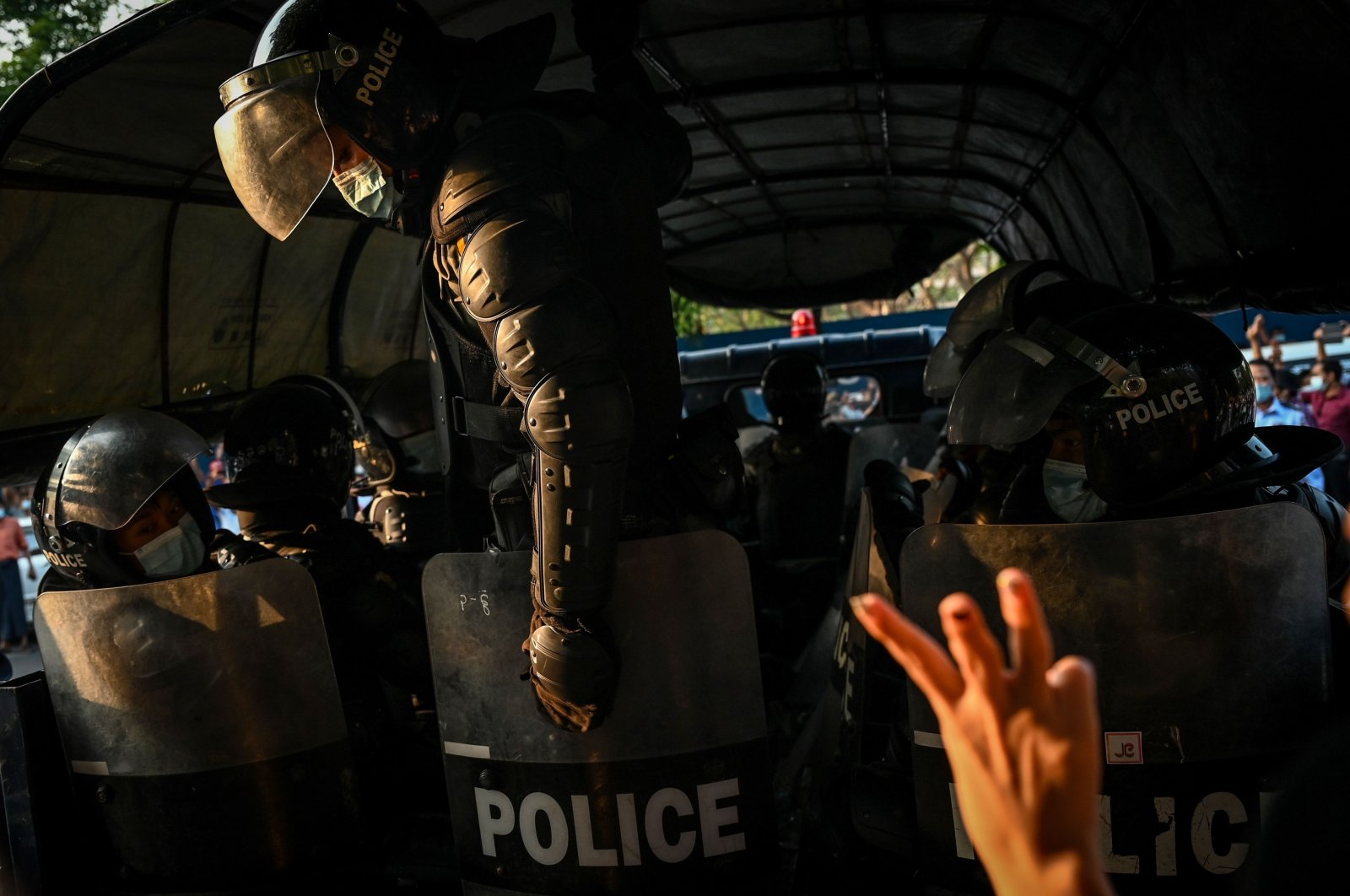 A protester demonstrating against the military coup gives the three-finger salute as police retreat from the headquarters of the National League for Democracy (NLD) in Yangon on Feb. 15, 2021. (AFP Photo)
by French Press Agency - AFP Feb 16, 2021 8:55 am
RECOMMENDED

Myanmar's generals imposed a second straight overnight internet shutdown into Tuesday, ignoring international condemnation as they worked to grind down a popular uprising against their coup.

In the two weeks since troops ousted Aung San Suu Kyi and took the civilian leader into custody, big urban centers and isolated village communities alike have been in open revolt.

Troops have fanned out around the country in recent days and fired rubber bullets to disperse one rally in Mandalay, hours before authorities again cut internet gateways.

"They shut down the internet because they want to do bad things," said 44-year-old Win Tun, a resident of commercial capital Yangon.

"We didn't sleep the whole night so we could see what would happen."

The shutdown came after another day of protests in Yangon, in defiance of armored vehicles and troop convoys stationed around key sections of the city – although turnout was smaller than in recent days.

Mandalay, the country's second-largest city, saw a clash that left at least six injured after police used slingshots against protesters and fired rubber bullets into the crowd.

Demonstrators retaliated by throwing bricks, according to a medic at the scene, while journalists said police had beaten them in the melee.

Crowds returned to the streets in parts of the country on Tuesday morning.

A group of engineers in hard hats stood on the steps of a pagoda in the capital Naypyidaw and held signs demanding the release of Suu Kyi from detention, a livestream from local media outlet Myanmar Now showed.

The international community has unleashed a torrent of condemnation against the leaders of Myanmar's new army administration, which insists it took power lawfully.

U.N. envoy Christine Schraner Burgener spoke to junta No. 2 Soe Win on Monday and warned him that the regime's network blackouts "undermine core democratic principles," according to a spokesperson.

More than 420 people have been arrested since the coup, according to a list of confirmed detentions from the Assistance Association for Political Prisoners monitoring group.

There are numerous unconfirmed reports of other arrests.

Suu Kyi and her top political ally, Win Myint, have not been seen in public since they were detained in dawn raids on Feb. 1, the day a new parliament was due to convene.

Both are expected to appear in court by videolink in Naypyidaw this week.

The Nobel laureate, who spent years under house arrest for opposing an earlier dictatorship, has been charged under an obscure import law for possessing unregistered walkie-talkies at her home.

Her lawyer Khin Maung Zaw said he had been unable to contact his client, though officials from her National League for Democracy (NLD) party have previously said she is in good health.

"There's nothing fair about the junta. This is theater. It's just theater. And of course, nobody believes them," Andrews said.