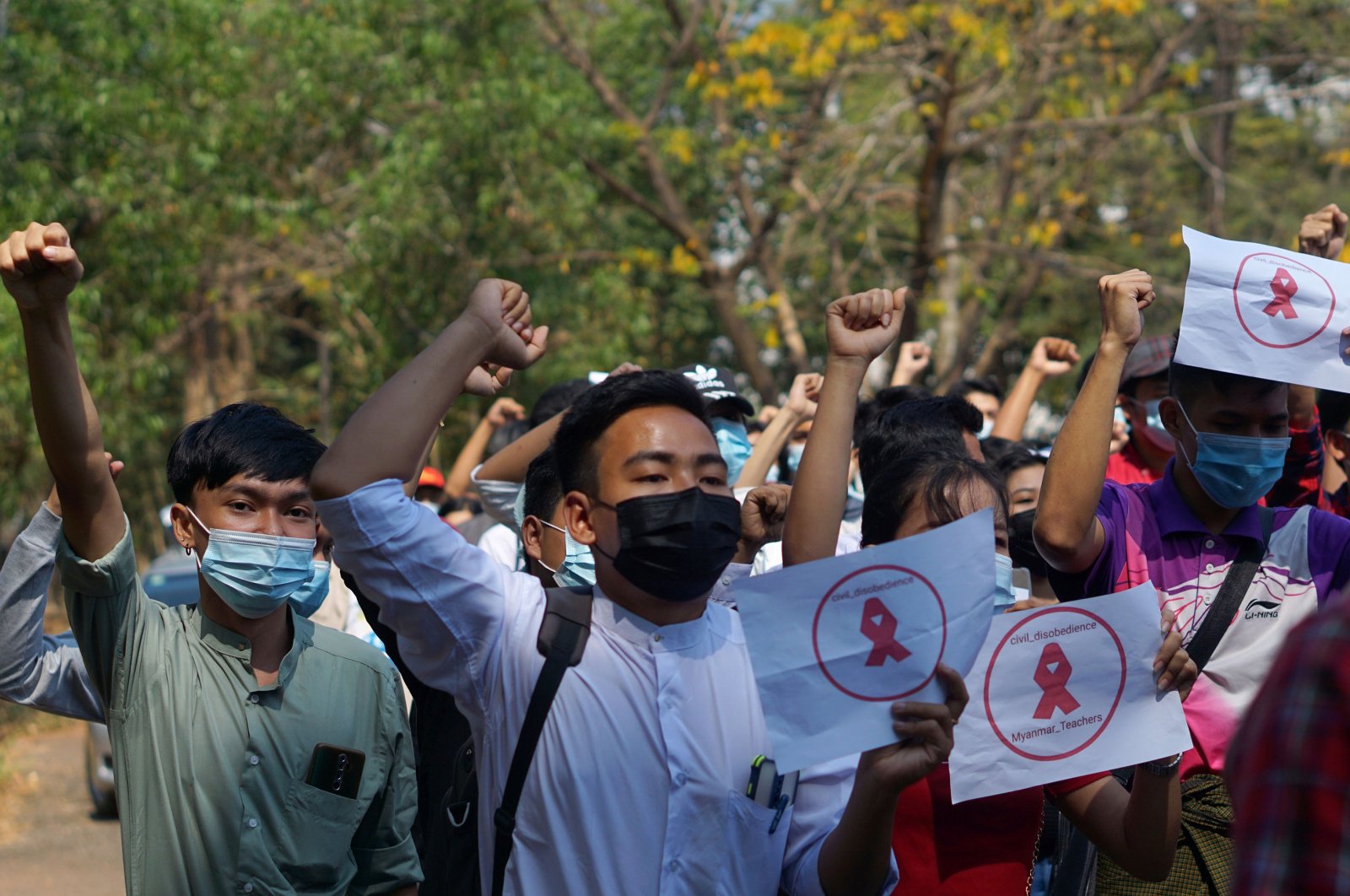 Young demonstrators spilled on to the streets of Myanmar on Saturday to denounce the country's new military regime in its largest anti-coup protests yet, despite a nationwide internet blackout aimed at stifling a growing chorus of popular dissent.

As many as 1,000 demonstrators marched on a road near Yangon University, most holding up the three-finger salute that has come to symbolize resistance to the army takeover.

A large police contingent blocked nearby roads, with two water cannon trucks parked at the scene, according to Agence France-Presse (AFP) reporters on site.

The march came as Myanmar was plunged into its second nationwide internet blackout this week, similar in magnitude to an earlier shutdown that coincided with the arrest of Suu Kyi and other senior leaders on Monday.

Those dawn raids brought a sudden halt to Myanmar's brief 10-year experiment with democracy and catalyzed an outpouring of fury that has migrated from social media to the streets.

Online calls to protest the army takeover have prompted increasingly bold displays of defiance against the new regime, including the nightly deafening clamor of people around the country banging pots and pans – a practice traditionally associated with driving out evil.

Some have shown their opposition by gathering for group photographs with banners decrying the coup and flashing a three-finger salute earlier adopted by democracy protesters in neighboring Thailand.

U.N. Secretary-General Antonio Guterres said a special envoy to the country had made "first contact" with Myanmar's deputy military commander to urge the junta to relinquish power to the civilian government it toppled.

"We will do everything we can to make the international community united in making sure that conditions are created for this coup to be reversed," he told reporters on Friday.

State media in Myanmar reported Saturday that junta figures had spoken with diplomats the previous day to respond to an international outcry and asked them to work with the new leaders.

"The Government understands the concerns of the international community on the continuation of Myanmar's democratic transition process," International Cooperation Minister Ko Ko Hlaing said in the meeting, according to the report.

As protests gathered steam this week, the junta ordered telecom networks to freeze users out of access to Facebook, an extremely popular service in the country and arguably its main mode of communication.

The platform had hosted a rapidly growing "Civil Disobedience Movement" forum that had inspired civil servants, health care professionals, and teachers to show their dissent by boycotting their jobs in civil service and hospitals.

The military widened its efforts to stifle dissent on Friday when it demanded new blocks on other social media services, such as Twitter.

Twitter said the move was an attack on "the rights of people to make their voices heard."

Norway-based Telenor said its local phone company had been instructed to cut access to the platform late on Friday, adding it had "challenged the necessity" of the directive.

An apparent ministry document ordering the blockade – seen by AFP but not verified – said Twitter and Instagram were being used to "cause misunderstanding among the public."

Some internet-savvy users have managed to circumvent the social media block by using VPN services.

By Saturday morning, trending hashtags like #WeNeedDemocracy, #HeartheVoiceofMyanmar and "Freedom from fear" – the latter a famed Suu Kyi quote – had millions of mentions.

An immensely popular figure despite a tarnished reputation in the West, Suu Kyi has not been seen in public since the coup, but a party spokesman said Friday she was under house arrest and "in good health."

U.S. President Joe Biden was among world leaders this week to demand the generals "relinquish power... release advocates and activists and officials they have detained, lift the restrictions in telecommunications, and refrain from violence."