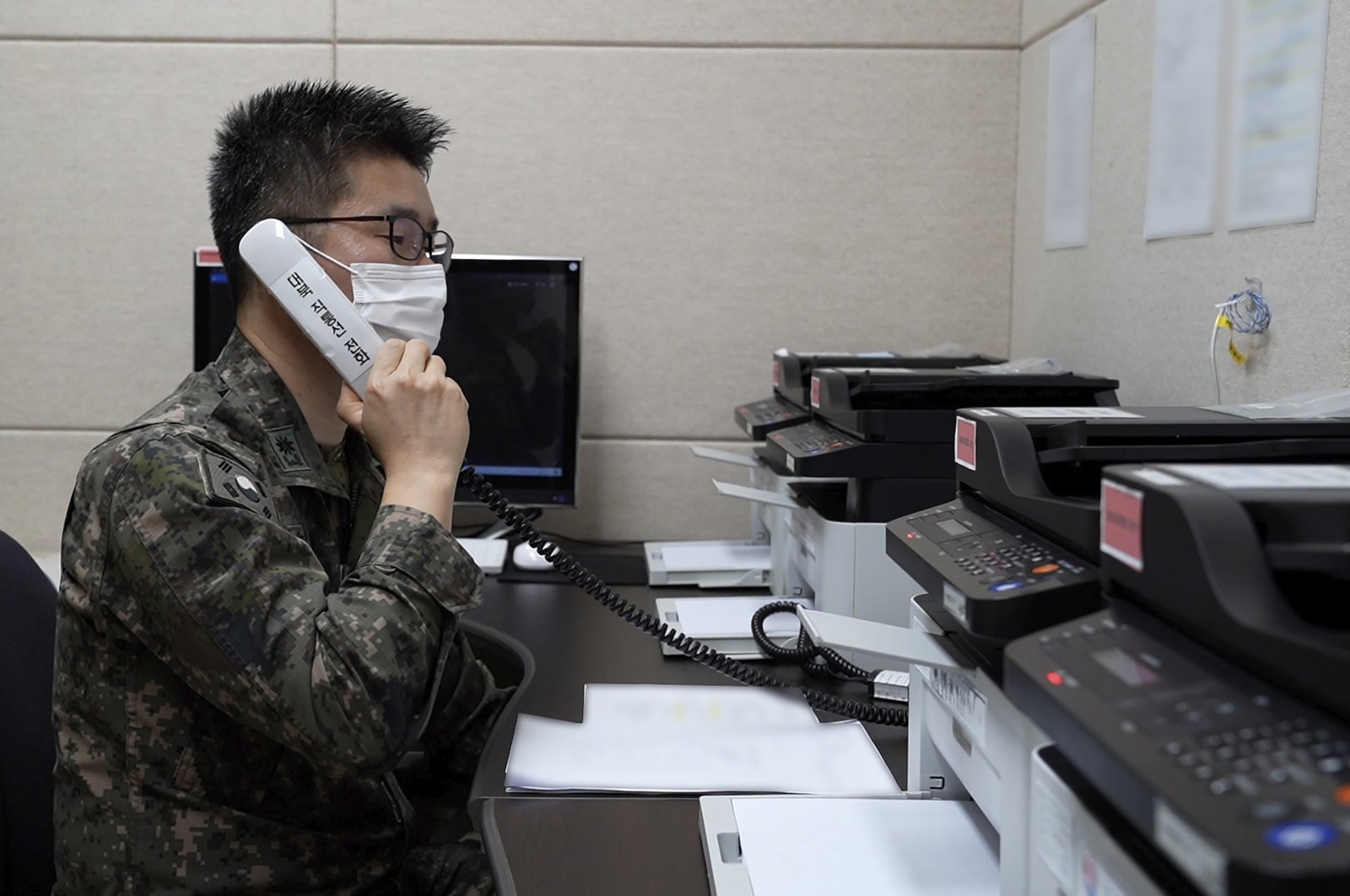 In this photo provided by the South Korean Defense Ministry, an unidentified South Korean military officer makes a test call with a North Korean officer through an inter-Korean military communication line at an undisclosed location near the demilitarized zone, South Korea, Monday, Oct. 4, 2021. (AP Photo)
by French Press Agency - AFP
Oct 04, 2021 8:54 am

North and South Korea restored their cross-border hotline on Monday, a step that Seoul said could help improve relations after Pyongyang sparked global concern with a string of missile tests in recent weeks.

The two sides resumed communications with officials exchanging their first phone call since August, days after the U.N. Security Council held an emergency meeting over the North Korean missile tests. The two Koreas had signaled a surprise thaw in relations in late July by announcing the resumption of cross-border communications – severed more than a year earlier – but the detente was short-lived, as Pyongyang stopped answering calls just two weeks later.

Seoul's Unification Ministry confirmed the phone call on Monday morning between officials from the two rivals.

"It's been a while and I'm very happy that the communication line has been restored," a South Korean official told his northern counterpart in footage provided to reporters by the ministry. The South's Defense Ministry also confirmed that cross-border military communications have resumed.

"With the restoration of the South-North communication line, the government evaluates that a foundation for recovering inter-Korean relations has been provided," the Unification Ministry said in a statement. "The government hopes... to swiftly resume dialogue and begin practical discussions for recovering inter-Korean relations."

It reported that the move was an attempt to establish "lasting peace" on the Korean Peninsula. But an analyst played down Monday's restoration as a "symbolic" gesture, noting the North's recent missile launches.

"Even if this leads to talks, we may enter a new phase where North Korea engages in dialogue but continues to carry out provocations simultaneously," said Park Won-gon, a professor of North Korean Studies at Ewha Womans University.

North Korea had unilaterally cut off all official military and political communication links in June last year over activists sending anti-Pyongyang leaflets across the border. The two sides said on July 27 this year that all lines were restored. Their joint announcement, which coincided with the anniversary of the end of the Korean War, was the first positive development since a series of summits between Kim and the South's President Moon Jae-in in 2018 failed to achieve any significant breakthrough.

They also revealed at the time that Kim and Moon had exchanged a series of letters since April in which they agreed that reestablishing hotlines would be a productive first step in rebooting relations between the two rivals which, despite the end of their 1950-53 conflict, remain technically at war.

But the cross-border communication lasted for just two weeks, with the North dropping them in protest at joint U.S.-South Korea military drills. In the period since, Pyongyang has held a series of tension-raising missile tests. In September, it launched what it said was a long-range cruise missile, and earlier this week it tested what it described as a hypersonic gliding vehicle, which South Korea's military said appeared to be in the early stages of development.

On Friday, it said it had successfully fired a new anti-aircraft missile. Pyongyang slammed the U.N. Security Council Sunday for holding an emergency meeting over the missile tests, accusing member states of toying with a "time bomb."