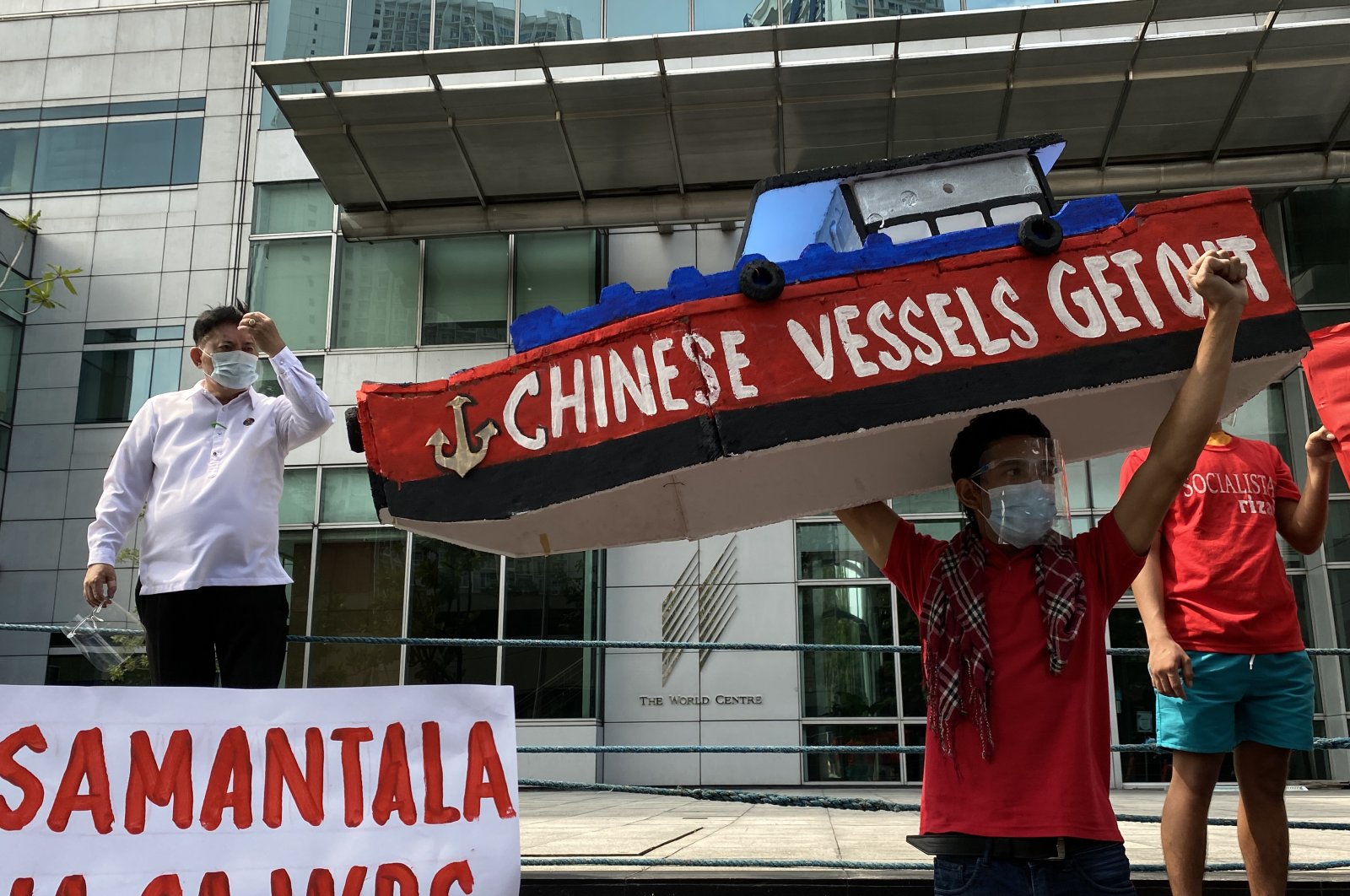 Filipino demonstrators stage a protest rally to denounce the continued intrusion of Chinese patrol ships inside the Philippine territory in the disputed South China sea, in front of the Chinese Consulate in Manila, Philippines, April 23, 2021. (EPA)
by REUTERS May 03, 2021 8:33 pm
RECOMMENDED

Some Chinese vessels in the South China Sea sent the Philippine foreign minister on an expletive-laced Twitter tirade Monday as he demanded Beijing get out of the disputed waters.

The comments by Teodoro Locsin, known for making blunt remarks at times, follow Manila's protests for what it calls the "illegal" presence of hundreds of Chinese boats inside the Philippines 200-mile (321-kilometer) Exclusive Economic Zone (EEZ).

"What are you doing to our friendship? You. Not us. We're trying. You. You're like an ugly oaf forcing your attentions on a handsome guy who wants to be a friend; not to father a Chinese province...," Locsin said.

China's Embassy to the Philippines did not immediately respond to a request for comment. Beijing previously said the vessels at the disputed Whitsun Reef were fishing boats taking refuge from rough seas. Manila is skeptical as they spotted over 200 Chinese ships near the disputed reef in March.

China plans to occupy almost the entire South China Sea, through which about $3 trillion of ship-borne trade passes each year. In 2016, an arbitration tribunal in The Hague ruled that the claim, which Beijing bases on its old maps, was inconsistent with international law.

Philippine officials believe the Chinese vessels are manned by militia.

On Sunday, Manilla vowed to continue maritime drills in its EEZ in the South China Sea in response to a Beijing demand that it stop actions it said could escalate disputes. The Philippines also conducted joint military exercises with the U.S. amid the rising tensions.

As of April 26, the Philippines had filed 78 diplomatic protests to China since President Rodrigo Duterte took office in 2016, foreign ministry data shows.

"Our statements are stronger too because of the more brazen nature of the activities, the number, frequency and proximity of intrusions," Marie Yvette Banzon-Abalos, executive director for strategic communications at the foreign ministry, said.

Duterte for the most part has pursued warmer ties with China in exchange for Beijing's promises of billions of dollars in investment, aid and loans.

"China remains to be our benefactor. Just because we have a conflict with China does not mean to say that we have to be rude and disrespectful," Duterte said in a weekly national address.

"So, kindly just allow our fishermen to fish in peace and there is no reason for trouble," Duterte said, addressing China.