Social media access restored in Pakistan after blockage amid protests 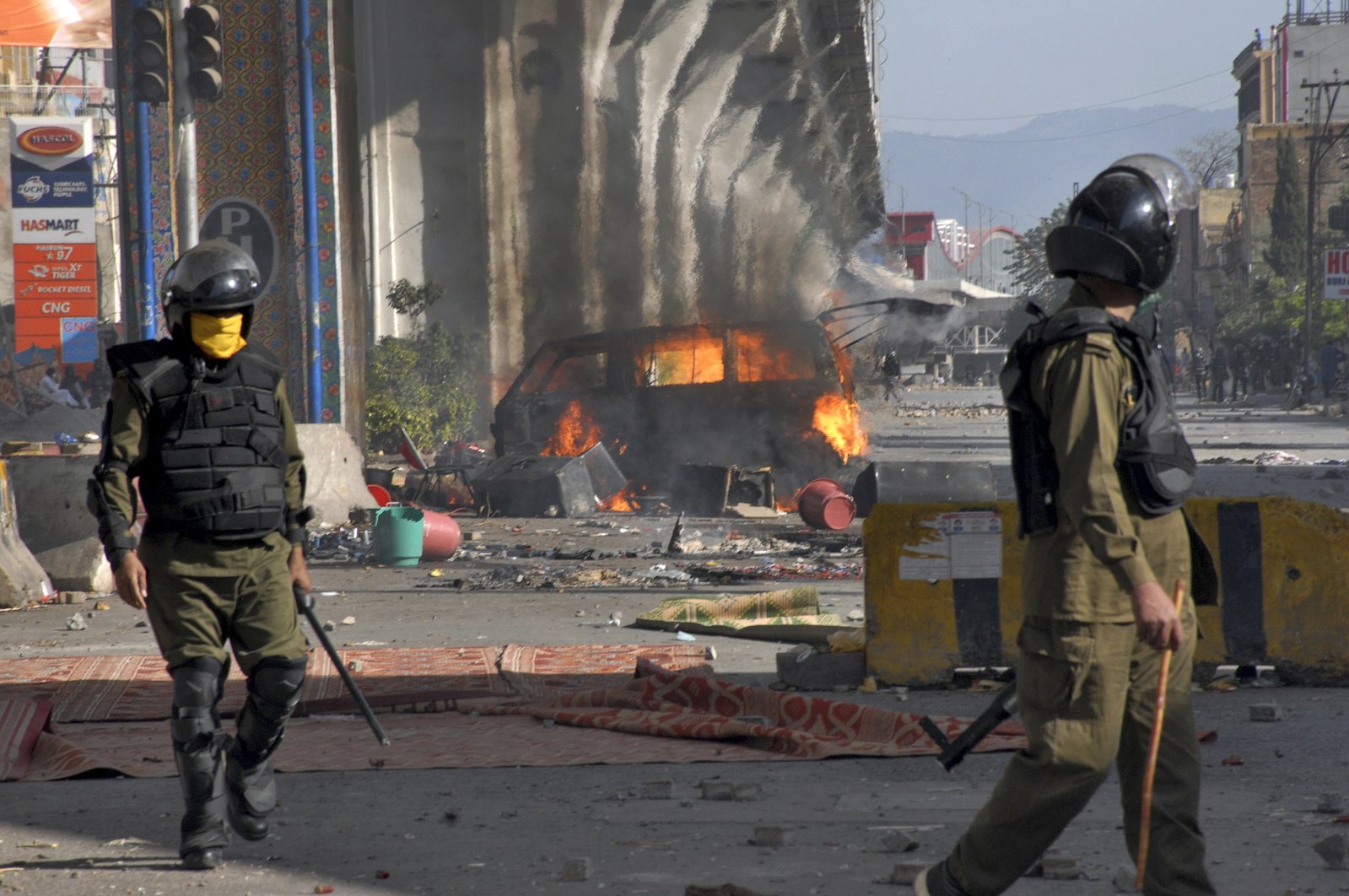 Police officers walk past a burning van setting on fire by angry supporters of Tehreek-e-Labiak Pakistan, a radical Islamist political party, during a clash, in Rawalpindi, Pakistan, April 14, 2021. (AP Photo)
by ASSOCIATED PRESS
Apr 16, 2021 11:57 am

Pakistan restored Facebook, Twitter and several other social media apps on Friday after blocking them for about five hours on security grounds amid anti-France protests that have been raging in the country for days and led to deaths among demonstrators and police.

In a notice to the Pakistan Telecommunication Authority, the Interior Ministry requested a "complete blocking" of Twitter, Facebook, Whatsapp, YouTube and Telegram until 3 p.m. (11 a.m. GMT).

It gave no reason for the ban, but it comes a day after French nationals and companies in Pakistan were advised by their embassy to temporarily leave in the wake of the rallies led by an extremist party that paralyzed large parts of the country and left two police officers dead.

Political parties frequently use social media to rally supporters and the announcement came just before Friday prayers, which usually draw huge crowds to mosques where firebrand sermons have in the past catalyzed protests. Pakistan authorities have used strategic social media bans and cuts to mobile service in the past in an attempt to head off major protests by preventing leaders from issuing mass calls for demonstrations.

Thousands of Tehreek-e-Labbaik Pakistan (TLP) supporters spilled onto the streets on Monday after their leader was detained following his calls for the expulsion of the French ambassador. Anti-French sentiment has been festering for months in Pakistan since President Emmanuel Macron threw his support behind a satirical magazine, which republished cartoons depicting Prophet Mohammed – an act deemed blasphemous by many Muslims.

Prime Minister Imran Khan's government has struggled to bring TLP to heel over the years, but this week announced an outright ban against the group, labeling it a terrorist outfit. Extra security personnel has been deployed to the French embassy – inside a guarded diplomatic enclave closed to the public – and shipping containers were placed as fortifications around its outer wall.

The protests have largely been cleared. But in Lahore, supporters continued a sit-in at a religious school – and TLP party headquarters – despite the circulation of a handwritten plea from leader Saad Rizvi to end the protests.

Blasphemy is a hugely sensitive issue in conservative Pakistan, where laws allow for the death penalty to be used on anyone deemed to have insulted Islam or Islamic figures. Criticism of France erupted in autumn last year when the satirical magazine Charlie Hebdo republished cartoons of the Prophet Mohammed. Macron's subsequent defense of the magazine triggered anger across the Muslim world, with tens of thousands in Pakistan, neighboring Iran and other Muslim countries flooding the streets and organizing anti-French boycotts.