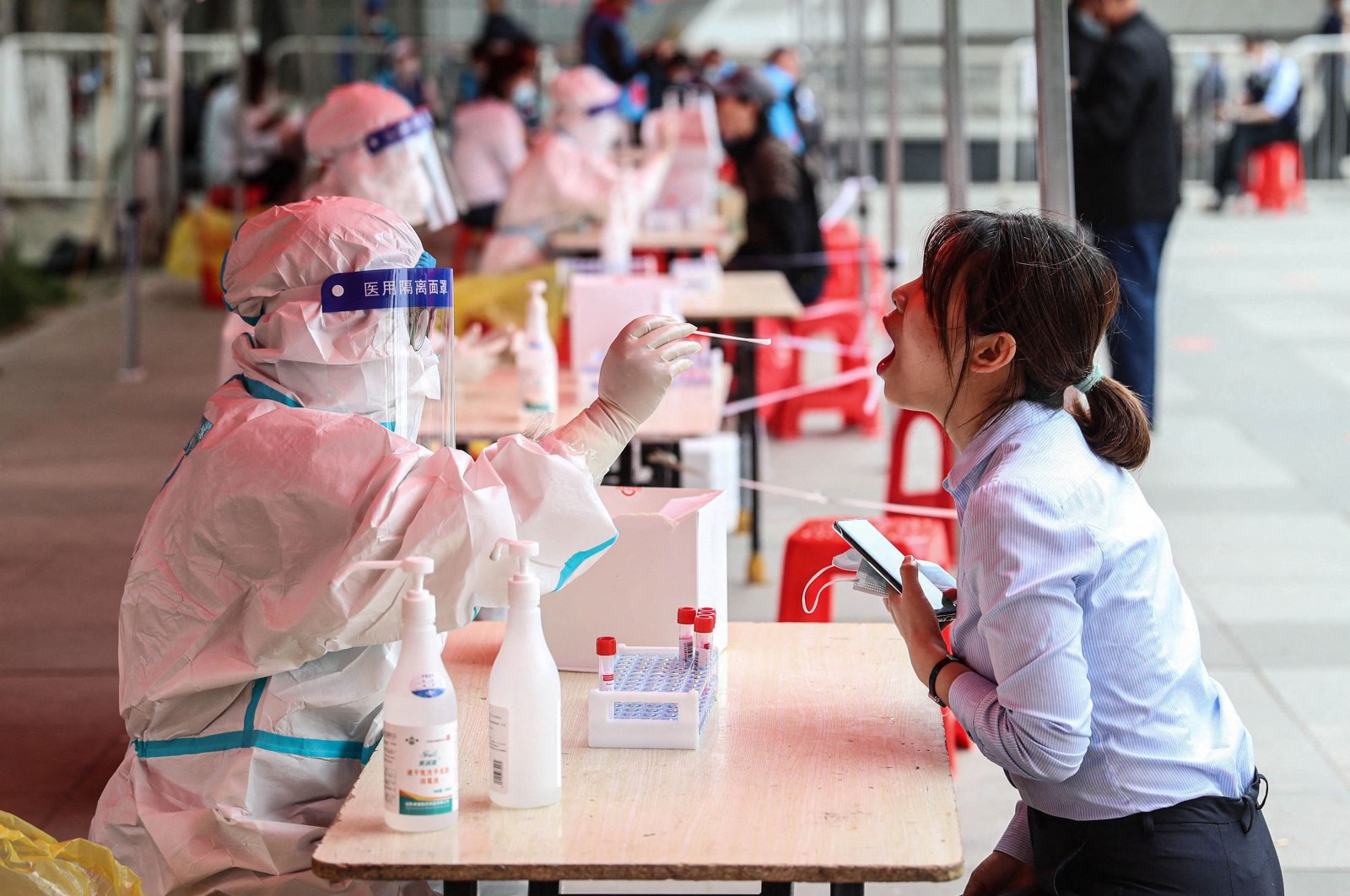 A health worker takes a swab sample from a resident to test for the COVID-19 coronavirus in Shenyang, in northeastern China's Liaoning province, May 20, 2021. (AFP Photo)
by ASSOCIATED PRESS May 20, 2021 1:24 pm
RECOMMENDED

Taiwan's worst outbreak of the COVID-19 pandemic grew Thursday, with a worrisome 63 new cases not having a clear connection to existing cases, while China started a global campaign to inoculate its nationals living and working abroad.

Taipei raised its alert level this week, banning indoor gatherings of more than five people and outdoor gatherings of more than 10 people. Schools are shut for two weeks, and many people are working from home. The majority of the cases in the latest outbreak have been discovered in the capital, Taipei, and neighboring New Taipei. The island overall reported 286 new cases Thursday that were transmitted domestically and more than 600,000 people are in quarantine because they were exposed to someone infected.

In the last week, the island has recorded more than 1,000 cases alone, accounting for more than a third of its pandemic total of 2,825. Most cases last year were among travelers, and the island was hailed for its success in keeping out the virus through robust public health measures like quarantines and contact tracing.

Meanwhile, Chinese citizens living in Thailand began being vaccinated on Thursday. China recently donated 500,000 vaccine doses, and Thailand agreed, in turn, to inoculate Chinese nationals as it slowly rolls out shots for its own citizens to contain a coronavirus surge that has sickened tens of thousands in the past two months. It was unclear how many of the 150,000 Chinese citizens living in Thailand will be inoculated under Beijing’s "Spring Sprout” program in this round of inoculations.

China has so far supplied millions of doses to the country, most of which Thailand purchased. The Thai government has said it will vaccinate Thais before inoculating most other foreigners, regardless of risk factors or age. Just over 2% of Thailand's 70 million people have received a first vaccine dose and about 1% have received a second. The government hopes to inoculate 70% of its people by the end of the year but has been criticized for taking too long to start vaccinating.

China's official People’s Daily newspaper says more than 500,000 Chinese citizens in more than 120 countries have benefited from the Spring Sprout vaccine program since it was launched in March.

In downtown Bangkok, a Chinese volunteer with a white mask, transparent shield and blue gloves stood in front of a red banner reading "Spring Sprout Action,” flanked by the flags of China and Thailand at a vaccination center. A dozen people waited to get a cursory medical check as nurses, accompanied by a translator, gave Chinese-made Sinovac shots in another room.

"I am happy and proud to be able to get a vaccine on day 1 organized by my government,” said Zhang Xiaohong, 40, who runs a logistics company in Thailand. He said he believes the Chinese government cares about its people.

Qin Qing, a 39-year-old real estate broker in Bangkok, said she was a bit nervous before getting the shot and felt slightly dizzy afterward.

"I am grateful for my country and the embassy, and people who help to make it happen, from airline staff who fly the vaccines here to Thai medical workers," she said.

Thailand had largely contained coronavirus cases last year by closing its borders, enforcing mandatory quarantines and actively tracing contacts of those found to be infected. The measures devastated its lucrative tourism industry but kept the pandemic at bay, for the most part, until early April. Then a surge that began in high-end nightspots in central Bangkok spread rapidly as people were allowed to travel during a mid-April national holiday.

On Thursday, health authorities reported 2,636 new cases and 25 deaths for a total of 119,585 infections and 703 deaths since the pandemic began. Of that number, 90,722 confirmed cases and 609 deaths have been recorded since April 1. A partial lockdown in recent weeks has made limited headway in containing outbreaks, especially in Bangkok and in prisons.

The capital has been hit especially hard, with thousands of cases surfacing in slums, crowded low-income housing and camps housing construction workers. Thailand has a population of about 70 million. More than 2.5 million are from neighboring countries, including Cambodia, Laos and Myanmar. Many are employed on construction sites and in factories.

Chinese nationals are the most numerous foreigners living in Thailand who are not from neighboring countries. They are the only foreigners being vaccinated under the Spring Sprout campaign. Natapanu Nopakun, deputy Foreign Ministry spokesman, said Thursday there are around 1.3 million legal migrant workers in Bangkok and its vicinity and more than 1 million illegal ones across the country.

The Labor Ministry intends to inoculate them as well because their high mobility is a risk factor in curbing infections. Another 200,000 foreigners – from Australia, Japan, Europe, the United States and elsewhere – are mostly professionals and retirees.

For now, they can only obtain COVID-19 shots by traveling overseas and would face lengthy, expensive quarantines on their return. Groups representing Americans living in Thailand sent a letter to U.S. Secretary of State Antony Blinken last week asking the government to supply some of the millions of unused vaccine doses available in the U.S. to inoculate American citizens in Thailand.