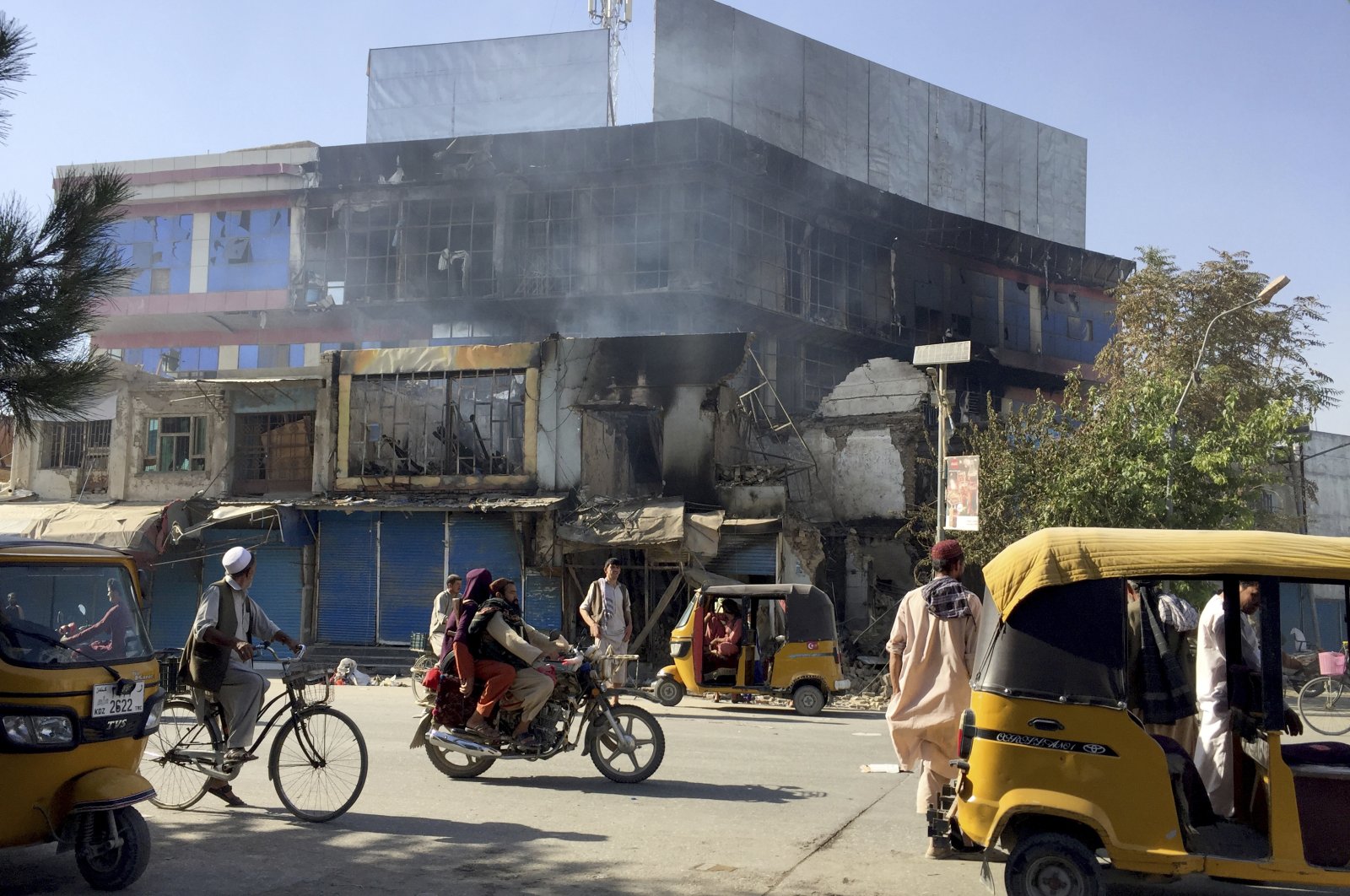 Shops are damaged after fighting between Taliban and Afghan security forces in the city of Kunduz, northern Afghanistan, Aug. 8, 2021. (AP Photo)
by Agencies Aug 09, 2021 8:19 am

The Taliban have made further military gains in Afghanistan, seizing the key northern Afghan cities of Kunduz, Sar-e-Pol and Taloqan as U.S. troops complete their pullout after two decades in the country

The Taliban tightened the noose around northern Afghanistan Sunday, capturing three more provincial capitals as they have taken their fight to the cities after seizing much of the countryside in recent months.

The insurgents have snatched up five provincial capitals in Afghanistan since Friday in a lightning offensive that appears to have overwhelmed government forces. Fighting in Afghanistan's long-running conflict has intensified since May, when foreign forces began the final stage of a withdrawal due to be completed later this month.

Kunduz, Sar-e-Pul and Taloqan in the north fell within hours of each other Sunday, lawmakers, security sources and residents in the cities confirmed. In Kunduz, the capital of the province of the same name, one resident described the city as being enveloped in "total chaos."

"After some fierce fighting, the mujahideen, with the grace of God, captured the capital of Kunduz," the Taliban said in a statement. "The mujahideen also captured Sar-e-Pul city, the government buildings and all the installations there."

The insurgents said on Twitter later Sunday that they had also taken Taloqan, the capital of Takhar province. Parwina Azimi, a women's rights activist in Sar-e-Pul, told Agence France-Presse (AFP) by phone that government officials and the remaining forces had retreated to an army barracks about three kilometers (two miles) from the city.

The Taliban had the compound "surrounded," said Mohammad Hussein Mujahidzada, a member of the provincial council. Taloqan was the next to fall, with resident Zabihullah Hamidi telling AFP by phone that he saw security forces and officials leave the city in a convoy of vehicles.

"The city is unfortunately fully in Taliban hands," a security source told AFP.

Kunduz is the most significant Taliban gain since the May offensive began – it has been a perennial target for the insurgents, who briefly overran the city in 2015 and again in 2016 but never managed to hold it for long.

The Defense Ministry said government forces were fighting to retake key installations. Spokesperson Mirwais Stanikzai said that reinforcements including special forces had been deployed to Sar-e-Pul and Sheberghan.

"These cities that the Taliban want to capture will soon become their graveyards," he added.

Kabul's ability to hold the north may prove crucial to the government's long-term survival. Northern Afghanistan has long been considered an anti-Taliban stronghold that saw some of the stiffest resistance to militant rule in the 1990s. The region remains home to several militias and is also a fertile recruiting ground for the country's armed forces.

"The capture of Kunduz is quite significant because it will free up a large number of Taliban forces who might then be mobilized in other parts of the north," said Ibraheem Thurial, a consultant for International Crisis Group. Washington's former envoy to Kabul, Ryan Crocker, said a prolonged civil war is a more likely outcome than a swift Taliban takeover of the entire country.

"They're doing what they're doing in part to create a climate of fear and panic," Crocker, told ABC's "This Week."

Vivid footage of the fighting was posted on social media over the weekend, including what appeared to be large numbers of prisoners being freed from jails in the captured cities. The Taliban frequently target prisons to release incarcerated fighters to replenish their ranks.

On Friday, the insurgents seized their first provincial capital, Zaranj in southwestern Nimroz on the border with Iran, and followed it up by taking Sheberghan in northern Jawzjan province the next day.

The pace of Taliban advances has caught government forces flatfooted, but they won some respite late Saturday after U.S. warplanes bombed Taliban positions in Sheberghan. Sheberghan is the stronghold of Afghan warlord Abdul Rashid Dostum, whose militiamen and government forces were reportedly retreating east to Mazar-i-Sharif in Balkh province. Rashid Dostum has overseen one of the largest militias in the north and garnered a fearsome reputation fighting the Taliban in the 1990s.

A retreat of his fighters dents the government's recent hopes that militias could help the overstretched military. Hundreds of thousands of Afghans have been displaced by the recent fighting, and on Saturday, 12 people were killed when their bus was struck by a roadside bomb as they tried to flee Gardez in Paktia province.

"I lost my mother, father, two brothers, two sisters-in-law and other members of the family," said Noor Jan. The withdrawal of foreign forces is due to finish at the end of this month ahead of the 20th anniversary of the September 11 attacks. The U.S.-led invasion sparked by 9/11 toppled the first Taliban regime in 2001.

A spokesperson for the Taliban's political office told Al-Jazeera TV on Sunday that there is no agreement on a cease-fire with the Afghan government, and warned against further U.S. intervention in Afghanistan.

White House press secretary Jen Psaki said on Friday that the recent surge in attacks runs counter to the "the Taliban claim to want international legitimacy” and offered that the militants "do not have to stay on this trajectory.”

With Taliban attacks increasing, Afghan security forces and government troops have retaliated with airstrikes aided by the United States. The fighting has raised growing concerns about civilian casualties. On Saturday, Taliban fighters entered the capital of the northern Jawzjan province after sweeping through nine of 10 districts in the province. Several other of the country’s 34 provincial capitals are threatened as Taliban fighters sweep through large swaths of Afghanistan at a surprising speed.

Earlier last week their fighters captured the ninth of 10 police districts of Lashkar Gah, the capital of southern Helmand province. Heavy fighting there continues, as do U.S. and Afghan government airstrikes, one of which damaged a health clinic and high school.

The Defense Ministry confirmed airstrikes occurred but said they targeted Taliban positions, killing 54 fighters and wounding 23 others. It made no mention of a clinic or school being bombed in its statement. Deputy provincial council chairman Majid Akhund said the facilities had been under Taliban control when they were struck. As they rolled through provincial capitals, the Taliban issued an English language statement on Sunday saying that residents, government employees and security officials had nothing to fear from them.

"No former civil servant and other government employee including those who worked in the security sector... should have any fear of the Mujahideen of the Islamic Emirate, nor flee towards other places,” said the statement. Revenge attacks and repressive treatment of women have been reported however in areas now under Taliban control.

At the same time, they have been waging an assassination campaign targeting senior government officials in the capital, Kabul. Earlier, they had shot and killed the director of Afghanistan’s Government Information Media Center just days after an assassination attempt on the acting defense minister.

Gunmen shot Toofan Omar, the station manager of Paktia Ghag radio and an officer for NAI, a rights group supporting independent media in Afghanistan, in a targeted killing in the capital on Sunday.“Omari was killed by unidentified gunmen... he was a liberal man... we are being targeted for working independently,” said Mujeeb Khelwatgar, the head of NAI. Officials in Kabul suspected Taliban fighters had carried out the attack. Last month the NAI reported that at least 30 journalists and media workers had been killed, wounded or abducted by militant groups in Afghanistan so far this year.

In southern Helmand province, officials said Taliban fighters had seized a local journalist, Nematullah Hemat, from his home in Lashkar Gah, the provincial capital, on Sunday. “There is just absolutely no clue where the Taliban have taken Hemat... we are really in a state of panic," said Razwan Miakhel, head of private TV channel Gharghasht TV, where Hemat was employed.

A Taliban spokesperson told Reuters that he had no information on either the killing in Kabul or the abducted journalist in Helmand.

A coalition of Afghan news organizations has written to U.S. President Joe Biden and leaders in the U.S. House of Representatives, urging them to grant special immigration visas to Afghan journalists and support staff.

On Monday, Afghan government forces were fighting the Taliban for a string of southern cities. The ministry of defense said hundreds of insurgent fighters had been killed or injured in the last 24 hours, with clashes reported in Kandahar and Helmand provinces. Stanekzai said the Taliban had suffered "heavy losses", and the security situation was improving.

"Afghan security forces are patrolling the cities," he said.