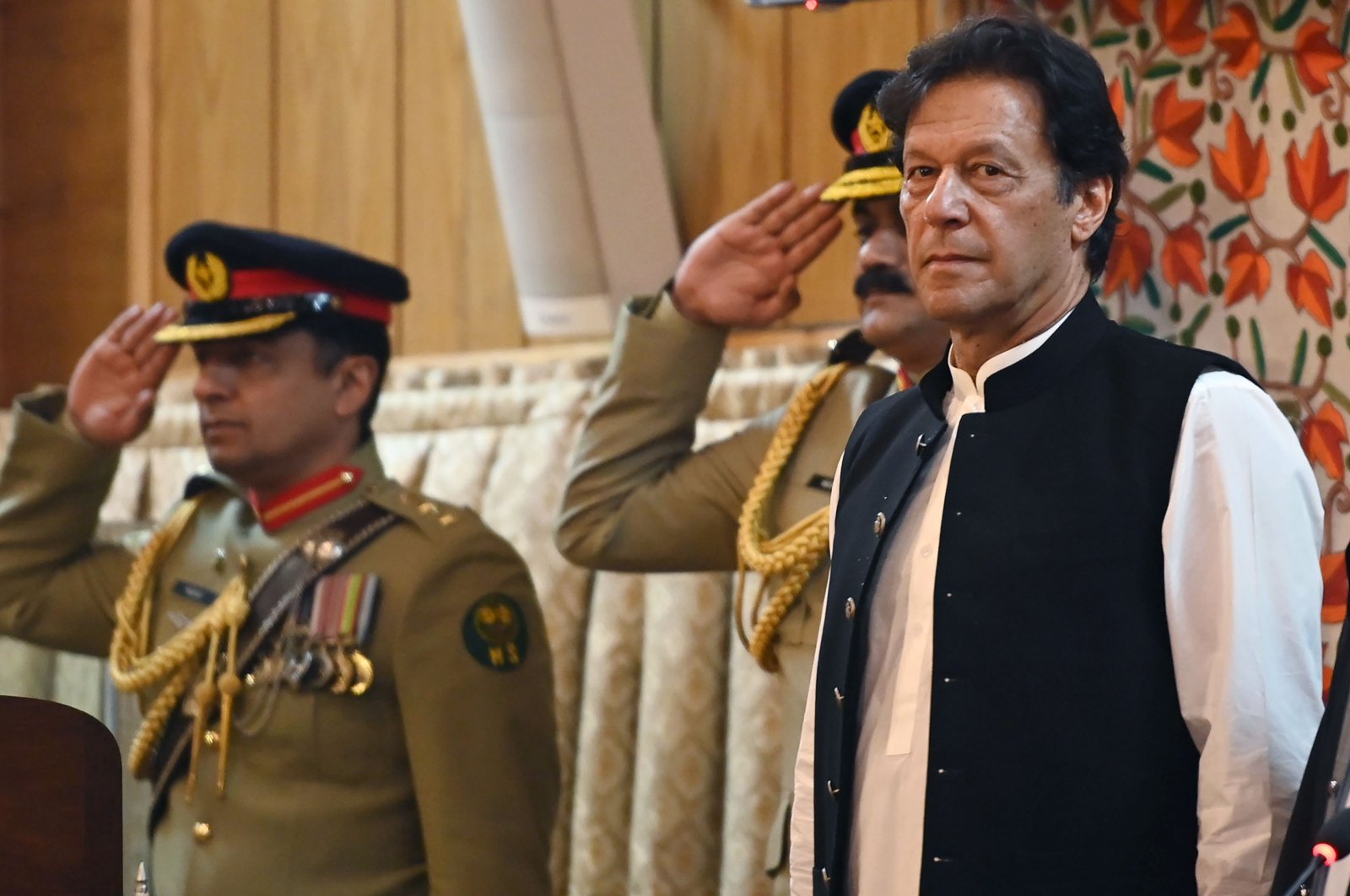 Pakistan's Prime Minister Imran Khan (R) listens to the national anthem as he arrives at the legislative assembly in Muzaffarabad, the capital of Pakistan-controlled Kashmir, Aug. 14, 2019. (AFP Photo)
by REUTERS Apr 15, 2021 2:19 pm
RECOMMENDED

The United Arab Emirates' (UAE) envoy to Washington confirmed the Gulf state is mediating between India and Pakistan to help the nuclear-armed rivals reach a "healthy and functional" relationship, as top intelligence officers from both countries held secret talks in Dubai in January in a new effort to calm military tension over the disputed Himalayan region of Kashmir.

Ambassador Yousef Al Otaiba said in a virtual discussion with Stanford University's Hoover Institution on Wednesday that the UAE played a role "in bringing Kashmir escalation down and created a ceasefire, hopefully ultimately leading to restoring diplomats and getting the relationship back to a healthy level".

"They might not sort of become best friends but at least we want to get it to a level where it's functional, where it's operational, where they are speaking to each other," he said.

Ties between India and Pakistan have been frozen since a suicide bombing of an Indian military convoy in Kashmir in 2019 traced to Pakistan-based militants that led to India sending warplanes to Pakistan. Later that year, India's prime minister withdrew Indian-ruled Kashmir's autonomy in order to tighten his grip over the territory, provoking outrage in Pakistan and the downgrading of diplomatic ties and suspension of bilateral trade.

But the two governments have reopened a back channel of diplomacy aimed at a modest road map to normalizing ties over the next several months, the people said. Kashmir has long been a flashpoint between India and Pakistan, both of which claim all of the region but rule only in part.

Officials from India's Research and Analysis Wing, the external spy agency and Pakistan's Inter-Services Intelligence (ISI) traveled to Dubai for a meeting facilitated by the UAE, two people aware of the matter told Reuters.

The Indian foreign ministry did not respond to a request for comment. Pakistan's military, which controls the ISI, also did not respond. But Ayesha Siddiqa, a top Pakistani defense analyst, said she believed Indian and Pakistan intelligence officials had been meeting for several months in third countries.

"I think there have been meetings in Thailand, in Dubai, in London between the highest level people," she said.

Such meetings have taken place in the past too, especially during times of crisis but never been publicly acknowledged.

"There is a lot that can still go wrong, it is fraught," said one of the people in Delhi. "That is why nobody is talking it up in public, we don't even have a name for this, it's not a peace process. You can call it a re-engagement," one of them said.

Both countries have reasons to seek a rapprochement. India has been locked in a border standoff with China since last year and does not want the military stretched on the Pakistan front.

China-ally Pakistan, mired in economic difficulties and on an IMF bailout program, can ill afford heightened tensions on the Kashmir border for a prolonged period, experts say. It also has to stabilize the Afghan border on its west as the United States withdraws.

"It’s better for India and Pakistan to talk than not talk, and even better that it should be done quietly than in a glare of publicity," said Myra MacDonald, a former Reuters journalist who has just published a book on India, Pakistan and war on the frontiers of Kashmir.

"...But I don't see it going very far beyond a basic management of tensions, possibly to tide both countries over a difficult period – Pakistan needs to address the fall-out of the U.S. withdrawal from Afghanistan, while India has to confront a far more volatile situation on its disputed frontier with China."

Dialing down the rhetoric

Following the January meeting, India and Pakistan announced they would stop cross-border shooting along the Line of Control (LoC) dividing Kashmir which has left dozens of civilians dead and many others maimed. That cease-fire is holding, military officials in both countries said.

Both sides have also signaled plans to hold elections on their sides of Kashmir this year as part of efforts to bring normalcy to a region riven by decades of bloodshed. The two have also agreed to dial down their rhetoric, the people Reuters spoke to said.

This would include Pakistan dropping its loud objections to Modi abrogating Kashmir's autonomy in August 2019, while Delhi in turn would refrain from blaming Pakistan for all violence on its side of LoC.

These details have not been previously reported. India has long blamed Pakistan for the revolt in Kashmir, an allegation denied by Pakistan.

"There is a recognition there will be attacks inside Kashmir, there has been discussions as to how to deal with it and not let this effort derailed by the next attack," one of the people said.

There is as yet, however, no grand plan to resolve the 74-year-old Kashmir dispute. Rather both sides are trying to reduce tensions to pave the way for a broad engagement, all the people Reuters spoke to said.

"Pakistan is transiting from a geo-strategic domain to a geo-economic domain," Raoof Hasan, special assistant to Pakistan Prime Minister Imran Khan, told Reuters. "Peace, both within and around with its neighbors, is a key constituent to facilitate that."