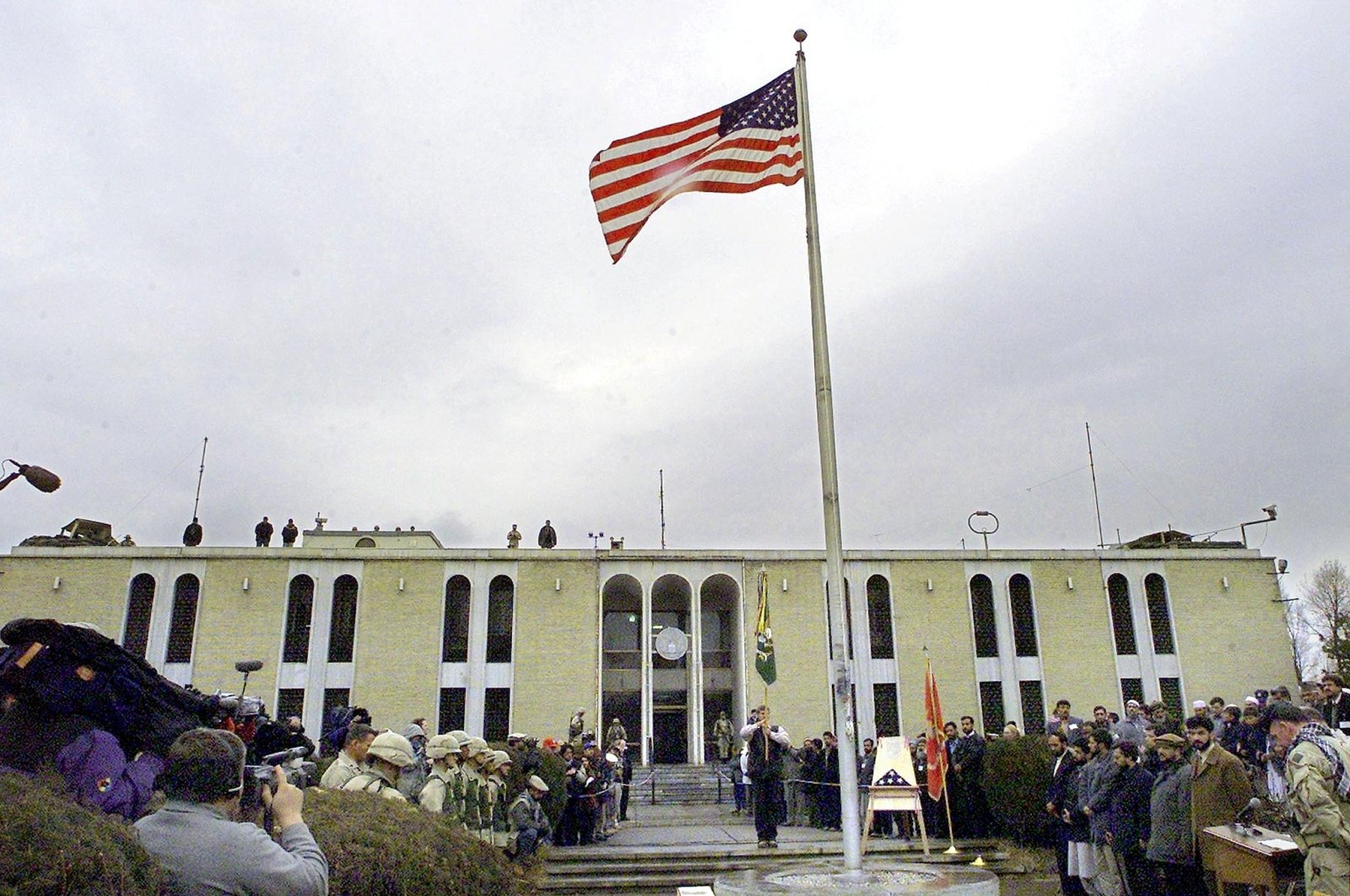 The American flag flutters after it was raised at the opening ceremony of the U.S. Embassy in the Afghani capital of Kabul, Afghanistan, Dec. 17, 2001. (AFP File Photo)
by DAILY SABAH Aug 13, 2021 12:39 pm
RECOMMENDED

The United States has asked the Taliban to spare its embassy in Kabul if they capture the Afghani capital, a New York Times report said Wednesday.

The New York Times obtained the information from two high-level American officials, whose identities were not disclosed. According to the report, Washington has contacted the Taliban through U.S. Special Representative to Afghanistan Zalmay Khalilzad, in order to ensure the safe evacuation of the embassy in case the Taliban capture Kabul.

The Taliban are moving swiftly toward the capital, capturing more and more provinces across Afghanistan, as U.S. and foreign troops are close to full withdrawal from the war-torn country after 20 years of military presence. Just weeks before the U.S. is scheduled to end its war in Afghanistan, State Department spokesperson Ned Price said diplomatic work will continue at the Kabul embassy.

"Our first responsibility has always been protecting the safety and the security of our citizens serving in Afghanistan, and around the world,” Price said at a briefing, calling the speed of the Taliban advance and resulting instability "of grave concern.”

Shortly before Price's announcement, the embassy in Kabul urged U.S. citizens to leave the country immediately. Nonessential personal had already been withdrawn from the embassy in April after Biden's withdrawal announcement and it was not immediately clear how many staffers would remain on the heavily fortified compound. As of Thursday, there were roughly 4,200 staffers at the embassy, but most of them are Afghan nationals, according to the State Department.

Legitimacy to Taliban for foreign aid

Khalilzad, who earlier arrived in the Qatari capital of Doha for several rounds of meetings with Taliban representatives as well as officials from Pakistan, China and Iran, hopes to convince Taliban authorities to keep the U.S. Embassy safe and operational foreseeing that the Taliban will seek U.S. financial aid and other support in the future.

The reports underlined that the Taliban leader wants to be perceived as the legitimate representative of Afghanistan and is trying to form relations with China and Russia in order to secure partial financial aid.

The report noted that the Taliban capturing all provinces in the north, except for Mazar-i-Sharif, has caused great concerns in the capital and an "Emergency Action Plan Committee" has been formed for the possible evacuation of the U.S. Embassy in Kabul, and regular meetings are being held.

The U.S. charge d'affaires in Kabul, Ross Wilson, warning that the Taliban’s efforts to monopolize power through inflicting fear and violence would cause international isolation, stated: "Since the beginning of April, the embassy started sending its nonessential personnel to their homes and other personnel that feel their lives are in danger were allowed to leave the country penalty-free; as the security of Kabul is compromised.

"In addition to that, the evacuation process is not clear in terms of whether American nationals and foreign personnel of the embassy are encompassed within the evacuation process. The fate of the Afghani nationals that have helped the U.S. government is a great source of concern for the high-level U.S. officials, as Taliban is expected to target them."

Following the U.S. decision to withdraw from Afghanistan and the failure of talks between the Kabul government and the Taliban, the militant group has increased the pace of its attacks. After taking over dozens of cities since June, the Taliban started targeting provincial capitals, and have taken 12 of Afghanistan's 34 provincial capitals as part of a weeklong blitz.

Some 1,659 civilians have lost their lives in the first half of 2021 and over 1,000 civilians have been killed last month alone, according to the United Nations. It is also stated that 18 million Afghani nationals are in need of humanitarian aid.

The Afghan Independent Human Rights Commission (AIHRC) noted that since the beginning of May, over a million civilians have been forced to leave their homes.