US envoy in Doha to press Taliban as N. Afghanistan nears collapse 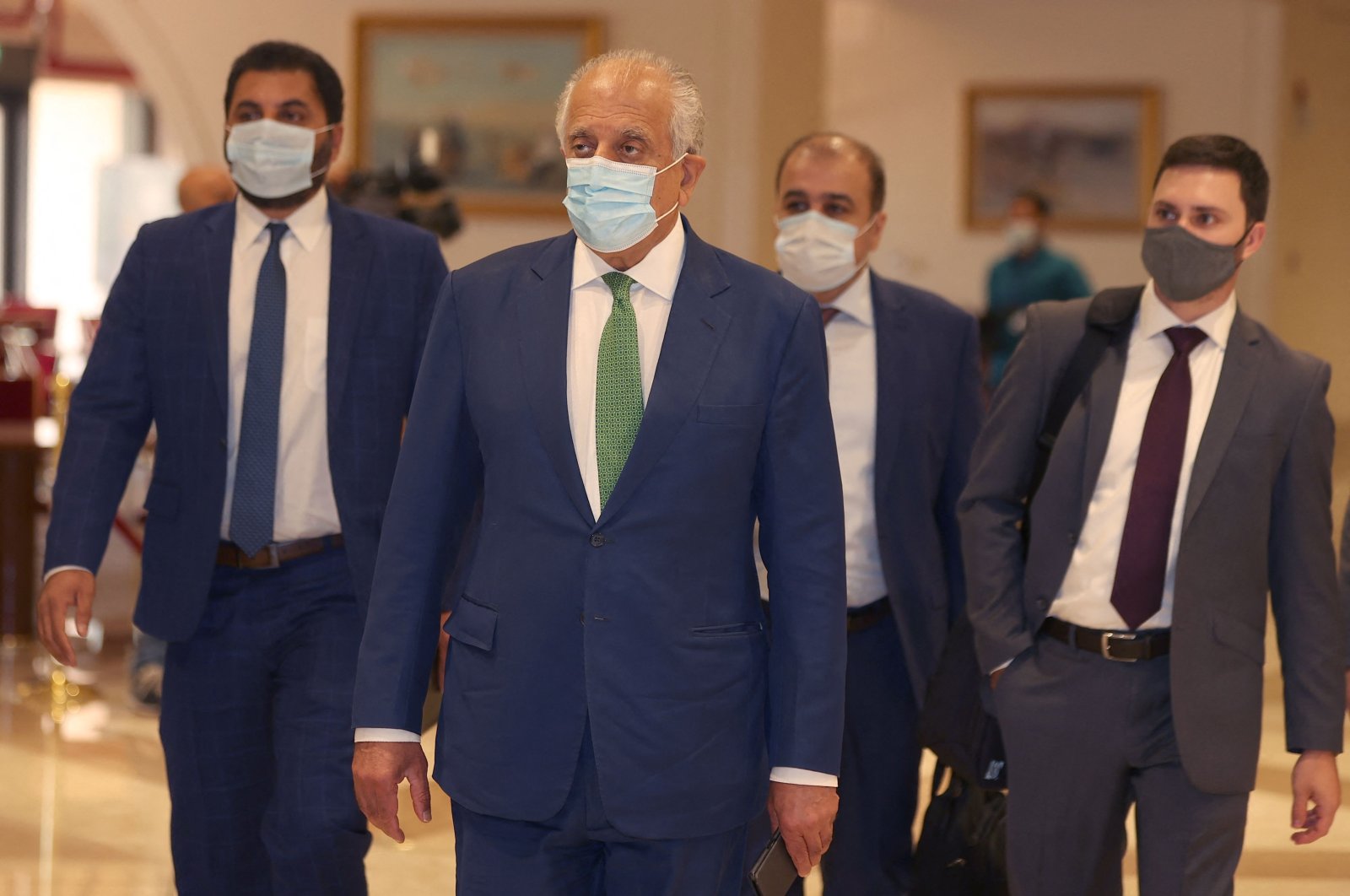 U.S. special envoy for Afghanistan, Zalmay Khalilzad (2nd L), arrives at a hotel for an international meeting on the escalating conflict in Afghanistan, in Doha, Qatar, Aug. 10, 2021. (AFP Photo)
by DAILY SABAH WITH AGENCIES Aug 10, 2021 11:00 am

The US envoy arrived in the Qatari capital of Doha for several rounds of meetings between Zalmai Khalilzad and the Taliban, as the armed group continues its military offensive, inching closer to full control of Afghanistan's north

The United States negotiator on Afghanistan, Zalmay Khalilzad, "will press the Taliban to stop their military offensive" at talks in Doha this week, the State Department said Monday after the insurgents seized a series of provincial capitals.

The department said that several rounds of talks were scheduled over three days in the Qatari capital as fighting in Afghanistan's long-running conflict has escalated dramatically since May, when the U.S.-led military coalition began the final stage of a withdrawal set to be completed before the end of the month. The insurgents have captured five out of 34 provincial capitals in the country in less than a week.

"Ambassador Khalilzad will be in Doha to help formulate a joint international response to the rapidly deteriorating situation in Afghanistan," the department added in a statement. "The increased tempo of Taliban military engagement, resulting civilian causalities in armed conflict between the sides, and alleged human rights atrocities are of grave concern."

"A negotiated peace is the only path to ending the war," the statement continued.

Meanwhile, the Taliban military chief released an audio message to his fighters Tuesday, ordering them not to harm Afghan forces and government officials in territories they conquer.

The recording was shared on Twitter by the Taliban spokesperson in Doha, Mohammad Naim. In the nearly five-minute audio, Mohammad Yaqoob, the son of late Taliban leader Mullah Mohammad Omar, also tells the insurgents to stay out of abandoned homes of government and security officials who have fled, leave marketplaces open and protect places of business, including banks. It was not immediately clear if Taliban fighters on the ground would heed Yaqoob's instructions.

Officials from Afghanistan's most vested neighbors – Pakistan, China and Iran – would also attend meetings in Doha. But Pentagon spokesperson John Kirby said it was down to the Afghan government and its forces to turn the tide, saying there was "not much" the United States could do to help.

"It's their country to defend now. It's their struggle," Kirby told reporters Monday, according to remarks carried by Reuters.

Michael Kugelman, at the Woodrow Wilson International Center for Scholars, doubted Washington had the means to do anything.

"I fear that the Taliban (are) just so strong and the Afghan military is so beleaguered right now, it's going to be hard to find some type of momentum-changer from the U.S.," he told Agence France-Presse (AFP).

The Taliban seized a sixth Afghan provincial capital Monday following a weekend blitz that saw urban centers fall in quick succession and the government struggle to keep the militants at bay. The insurgents say they are moving in on Mazar-e-Sharif – the largest city in the north, whose fall would signal the total collapse of government control in a region that has traditionally been anti-Taliban. Government forces are also battling the hardline militant group in Kandahar and Helmand, the southern Pashto-speaking provinces from where the Taliban draw their strength.

The Taliban have appeared largely indifferent to peace overtures, and seem intent on a military victory to crown a return to power after their ouster 20 years ago in the wake of the 9/11 attacks. As fighting raged, tens of thousands of people were on the move inside the country, with families fleeing newly captured Taliban cities with tales of brutal treatment at the hands of the insurgents.

In the town of Aibak, capital of Samangan province on the main road between Mazar-i-Sharif and the national capital, Kabul, Taliban fighters were consolidating their grip, moving into government buildings, after capturing Sheberghan to its west, and Kunduz and Taloqan to its east. Most members of the government security forces appeared to have withdrawn from the town, residents said, as they kept off the streets.

"The Taliban are beating and looting," said Rahima, now camped out with hundreds of families at a park in the capital, Kabul, after fleeing Sheberghan province. "If there is a young girl or a widow in a family, they forcibly take them. We fled to protect our honor."

Farid, an evacuee from Kunduz who did not want to be identified further, added, "We are so exhausted and our hearts are darkened by life."

In Kabul, President Ashraf Ghani called on regional strongmen to support his embattled government. His aides said he was seeking help from regional militias he has squabbled with over the years to rally to the defense of his government. Ghani also appealed to civilians to defend the country's "democratic fabric," aides said.

The Taliban earned notoriety during their first stint in power between 1996 to 2001 for introducing a harsh rule that barred girls from education and women from work. Crimes were punished by public floggings or executions, while a host of activities – from playing music to nonreligious TV – were also banned. They have given little indication of how they would rule if they take power again.

Following the capture of Aibak on Monday, the insurgents have now overrun five provincial capitals in the north, sparking fears the government has lost its grip on the region. They have also taken Zaranj, the capital of Nimroz province, in the southwest. The manner in which the cities have fallen – some have capitulated without a fight – has alarmed many.

A spokesperson said Taliban fighters had entered Mazar-e-Sharif, but officials – and residents contacted by phone – said the group was exaggerating, with clashes confined to surrounding districts. Mazar-e-Sharif's longtime strongman Atta Mohammad Noor vowed to fight to the end, saying there would be "resistance until the last drop of my blood."

"I prefer dying in dignity than dying in despair," he tweeted.

Tolo News reported government forces still had control of the airport and army barracks outside the city in neighboring Kunduz, although there has been no official comment on the situation.

There have been reports by civilians who have fled Taliban advances of heavy-handed treatment by the insurgents – schools being burned down and repressive restrictions on women. There have also been reports of revenge killings in areas where the Taliban have gained control.

The insurgents have also claimed responsibility for killing a comedian in southern Kandahar, assassinating the government's media chief in Kabul and a bombing that targeted acting Defense Minister Bismillah Khan Mohammadi, killing eight and wounding more. The minister was not harmed in the attack.

The intensifying war has also increased the number of civilian casualties. The International Committee of the Red Cross said that its staff has treated more than 4,000 Afghans this month in their 15 facilities across the country, including in Helmand and Kandahar, where Afghan and U.S. airstrikes are trying to rein in the Taliban onslaught.

"We are seeing homes destroyed, medical staff and patients put at tremendous risk, and hospitals, electricity and water infrastructure damaged,” Eloi Fillion, ICRC’s head of delegation in Afghanistan, said in a statement.

"The use of explosive weaponry in cities is having an indiscriminate impact on the population," Fillion added. "Many families have no option but to flee in search of a safer place. This must stop.”