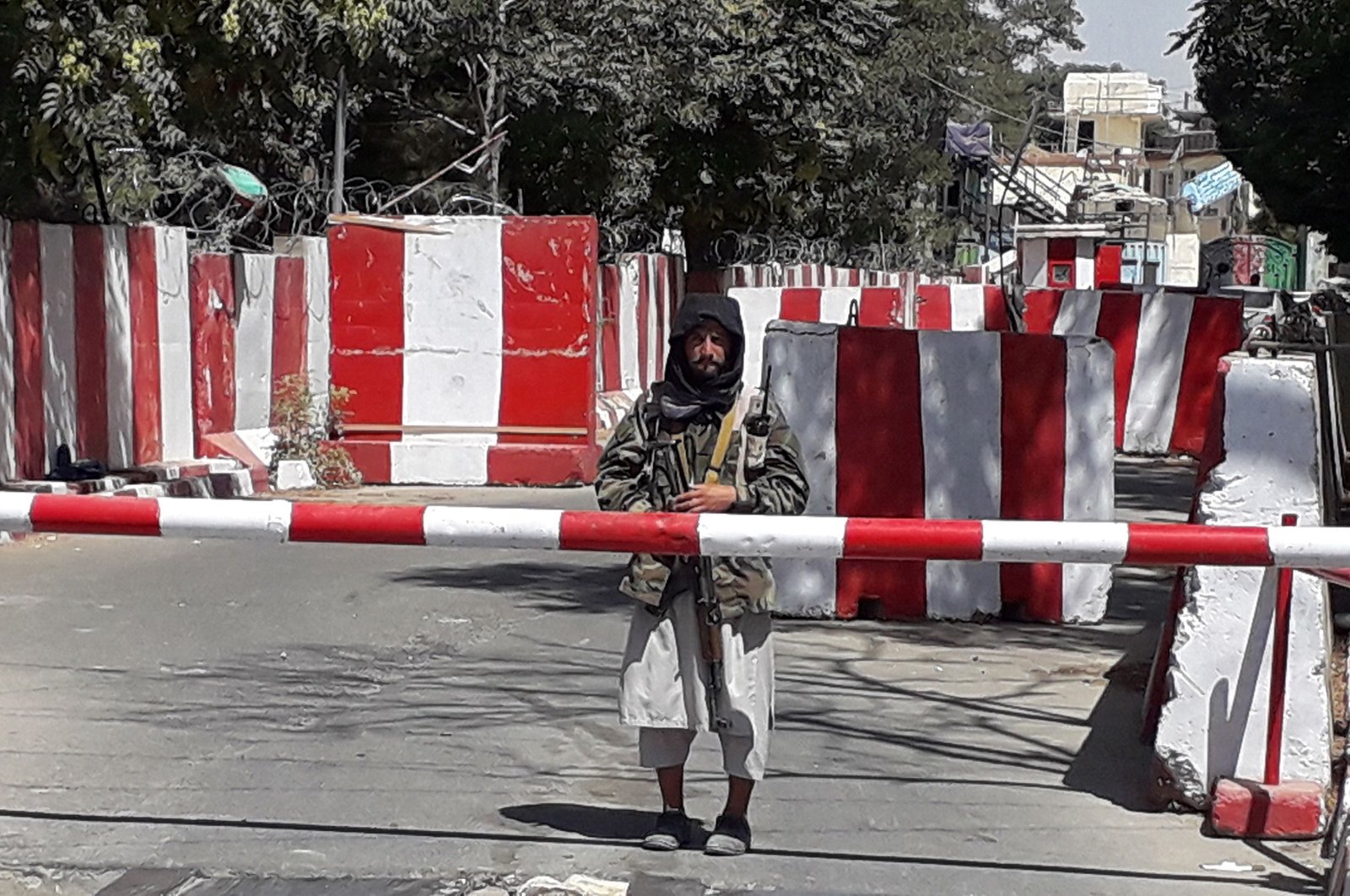 The Taliban have captured Afghanistan's Lashkar Gah, capital of the southern province of Helmand and the provincial capital of the western province of Ghor, a day after the group claimed control over Kandahar and Herat, the country’s second and third largest cities, a police official said on Friday.

Government and senior armed forces officials flew by helicopter out of the government's last stronghold in the town at about midnight on Thursday, said the official, who declined to be identified.

"About 200 ANDSF members, who were left in the governor's compound, with the intervention of elders, surrendered to the Taliban," said the official, referring to members of the Afghan National Defense and Security Forces and tribal elders, according to Reuters. The head of Ghor council said the city of Feroz Koh fell to the insurgents on Friday.

Afghanistan’s rapidly advancing Taliban insurgents entered a western provincial capital, an official said Friday, hours after they captured the country’s second and third largest cities in a lightning advance just weeks before America is set to end its longest war.

The seizure of Kandahar and Herat marks the biggest prizes yet for the Taliban, who have taken 12 of Afghanistan’s 34 provincial capitals as part of a weeklong blitz.

While Kabul itself isn’t directly under threat yet, the losses and the battles elsewhere further tighten the grip of a resurgent Taliban, who are estimated to now hold over two-thirds of the country and continue to press their offensive.

With security rapidly deteriorating, the United States planned to send in 3,000 troops to help evacuate some personnel from the U.S. Embassy in Kabul. Separately, Britain said about 600 troops would be deployed on a short-term basis to support British nationals leaving the country, and Canada is sending special forces to help evacuate its embassy. The State Department said it will also increase the tempo of Special Immigration Visa flights for Afghans, which has aided U.S. efforts in the country.

Negotiators from the Afghan government are said to have offered the Taliban a power-sharing deal in return for an end to the violence in the country, Agence France-Presse (AFP) reported Thursday, citing a government negotiating source.

Thousands of Afghans have fled their homes amid fears the Taliban will again impose a brutal, repressive government, all but eliminating women’s rights and conducting public executions.

Peace talks in Qatar remain stalled, though diplomats are still meeting. Fazel Haq Ehsan, chief of the provincial council in the western Ghor province, said Friday that the Taliban had entered Feroz Koh, the provincial capital, and that there was fighting inside the city.

The Taliban meanwhile claimed to have captured Qala-e Naw, capital of the western Badghis province. There was no official confirmation.

The latest U.S. military intelligence assessment suggests Kabul could come under insurgent pressure within 30 days and that, if current trends hold, the Taliban could gain full control of the country within a few months. The Afghan government may be forced to pull back to defend the capital and just a few other cities in the coming days if the Taliban maintain momentum.

The onslaught represents a stunning collapse of Afghan forces after the United States spent nearly two decades and $830 billion trying to establish a functioning state after toppling the Taliban in the wake of the Sept. 11 attacks.

The advancing Taliban ride on American-made Humvees and carry M-16s pilfered from Afghan forces. Afghan security forces and the government have not responded to repeated questions from journalists, instead issuing video communiques that downplay the Taliban advance.

Bill Roggio, a senior fellow at the Foundation for Defense of Democracies, said the Afghan army has rotted from within due to corruption and mismanagement, leaving troops in the field poorly equipped and with little motivation to fight.

The Taliban, meanwhile, have spent a decade taking control of large swaths of the countryside, positioning themselves to rapidly seize key infrastructure and urban areas once President Joe Biden announced the U.S. withdrawal. The difficulty of moving troops out to the provinces means the government is likely to focus all its efforts on defending the capital.

"Whatever forces are left or remaining that are in the Kabul area and the provinces around them, they’re going to be used for the defense of Kabul,” Roggio said. "Unless something dramatically changes, and I don’t see how that’s possible, these provinces will remain under Taliban control."

In Herat, Taliban fighters rushed past the Great Mosque in the historic city – a structure that dates to 500 B.C. and was once a spoil of Alexander the Great – and seized government buildings. Witnesses described hearing sporadic gunfire at one government building while the rest of the city fell silent under the insurgents’ control.

Herat had been under militant attack for two weeks, with one wave blunted by the arrival of warlord Ismail Khan and his forces. But on Thursday afternoon, Taliban fighters broke through the city’s defensive lines and later said they were in control.

Afghan lawmaker Semin Barekzai also acknowledged the city’s fall, saying that some officials had escaped. Witnesses described seeing Taliban fighters who had been detained at Herat’s prison now freely moving on the streets. It wasn’t immediately clear what happened to Khan, who earlier had been described as under attack with his forces at a government building.

In Kandahar, the birthplace of the Taliban, insurgents seized the governor’s office and other buildings, witnesses said. The governor and other officials fled the onslaught, catching a flight to Kabul, the witnesses added. They declined to be named publicly as the defeat has yet to be acknowledged by the government.

The Taliban had earlier attacked a prison in Kandahar and freed inmates inside, officials said. Earlier Thursday, the militants raised their white flags over the city of Ghazni, which sits on a crucial north-south highway just 130 kilometers (80 miles) southwest of Kabul. Ghazni provincial council member Amanullah Kamrani alleged that the provincial governor and police chief made a deal with the Taliban to flee after surrendering.

Taliban video and photos purported to show the governor’s convoy freely passing by insurgents as part of the deal. Afghan Interior Ministry spokesperson Mirwais Stanekzai later said the governor and his deputies had been arrested over the alleged deal. The officials could not be immediately reached for comment.

Stanekzai also acknowledged in a video message that parts of Ghazni had fallen, though he insisted government security forces "do exist” in the city.

Already, the Taliban’s weeklong blitz has seen the militants seize nine other provincial capitals around the country.

Late Thursday night, an Afghan official, speaking on condition of anonymity to discuss developments, said the Taliban have also taken much of western Badghis province – but not the provincial army corps and the intelligence department. A Taliban tweet claimed the insurgents captured the seat of the provincial governor, the police headquarters and all other government offices.

Even as diplomats met in Doha, Qatar on Thursday, the success of the Taliban offensive called into question whether they would ever rejoin long-stalled peace talks with the government in Kabul. Instead, the group could come to power by force – or the country could splinter into factional fighting like it did after the Soviet withdrawal in 1989.

The U.N. Security Council was preparing Friday a draft statement that would denounce the Taliban and their rapid overrun of the country that caused high civilian casualties. The statement was expected to threaten sanctions for abuses and acts that risk Afghanistan’s peace and stability, diplomats said. It also “strongly affirms that the Islamic Emirate of Afghanistan is not recognized at the U.N. and declares that it does not and will not support the establishment of any government in Afghanistan imposed through military force or restoration of the Islamic Emirate of Afghanistan”.

An official statement drawn up by Estonia and Norway and reviewed by the Reuters news agency must be agreed by consensus between 15 members.