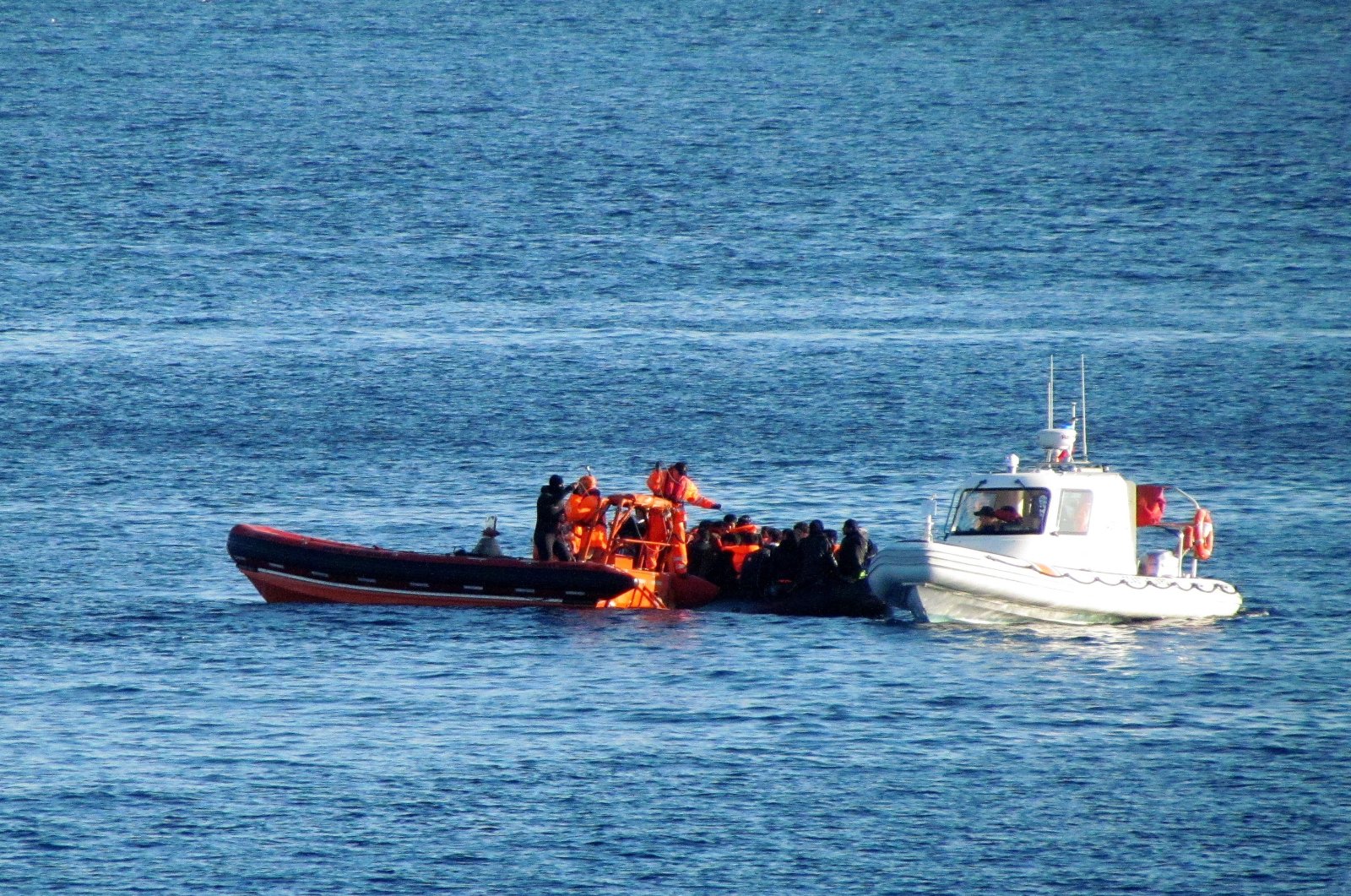 The Turkish Coast Guard managed to rescue two asylum-seekers and two more from the surrounding waters of Boğaz Island, located off the coast of Izmir, Turkey, March 19, 2021. (IHA)
by DAILY SABAH WITH AA
Mar 19, 2021 1:36 pm

At least three people died and one more is missing after the Greek Coast Guard dumped a group of asylum-seekers into the Aegean Sea, Turkish authorities said Friday.

The Turkish Coast Guard managed to rescue two asylum-seekers from Boğaz Island, located off the coast of Izmir, and two more from the surrounding waters, according to a statement by the governor's office.

The bodies of two more people were also recovered, the statement said.

The third person to die was one of the two saved from the water, who passed away at a hospital, it added.

"According to the asylum-seekers' initial statements, Greek officials seized their belongings, tied their hands using plastic handcuffs and threw them into the sea without any life raft or boat," read the statement.

Turkish search teams are braving tough weather conditions to find the missing individual as quickly as possible, it added.

Later, Interior Minister Süleyman Soylu posted a video on Twitter showing scenes of the rescue and the asylum seekers in hospital.

One of them is seen with zip tie handcuffs on his wrists, while Muhammad, another asylum seeker, tells about the incident.

Saying that they went to the Greek island of Chios and stayed there for two days, he explained: "Then they took our cellphones and money and beat us up."

"There were seven of us ... and now there are three, I don't know where the other four are," he said, adding that he saw one person dead.

The latest rescue operations took place on Thursday when Turkish security forces rescued a total of 255 irregular migrants throughout the country in a single day.

Security sources said at least 23 asylum-seekers claiming to have been beaten and deported by Bulgarian authorities were held in northwestern Turkey.

The Syrian and Iraqi nationals were held by gendarmerie teams in the villages of Ahlatli and Beyci in Kofcaz district and in an area near the Derekoy Border Gate in Kırklareli province bordering Bulgaria, said the sources, who asked not to be named due to restrictions on speaking to the media.

The asylum-seekers told Turkish forces they had crossed the border but were arrested by Bulgarian police who beat them, took away their valuables and left them on the Turkish side of the crossing.

After routine medical checks, they were first sent to the provincial gendarmerie command and then transferred to a local repatriation center.

Meanwhile, 28 irregular migrants were held in the Tatvan district in eastern Bitlis province, according to the provincial governorate.

Another 204 asylum-seekers were rescued while trying to illegally cross the border in the Urla district of Izmir province.

The asylum-seekers were rescued by gendarmerie teams upon calling an ambulance for help.

Pushbacks are considered contrary to international refugee protection agreements that say people shouldn't be expelled or returned to a country where their life or safety might be in danger due to their race, religion, nationality or membership in a social or political group.

The remark came from UNHCR Spokesperson Boris Cheshirkov at a briefing in Geneva as he responded to a question from Anadolu Agency (AA) on Turkey's appeal to stop Greece from forcing back asylum-seekers from its borders.

"The situation with pushbacks at both land and sea borders of Greece is one that we have been following closely over the last year," he said, adding that the U.N. agency has repeatedly expressed concern over the issue.

Cheshirkov said the refugee agency had also received reports that around 13 Afghan nationals, including children, were recently sent back after reaching the northern shores of Lesbos.

A similar statement also came from the European Commission, the executive branch of the European Union, as it has urged Greece to act in line with the bloc's values and to respect basic human rights regarding the reports on the country's practice of pushing migrants back toward Turkish land borders.