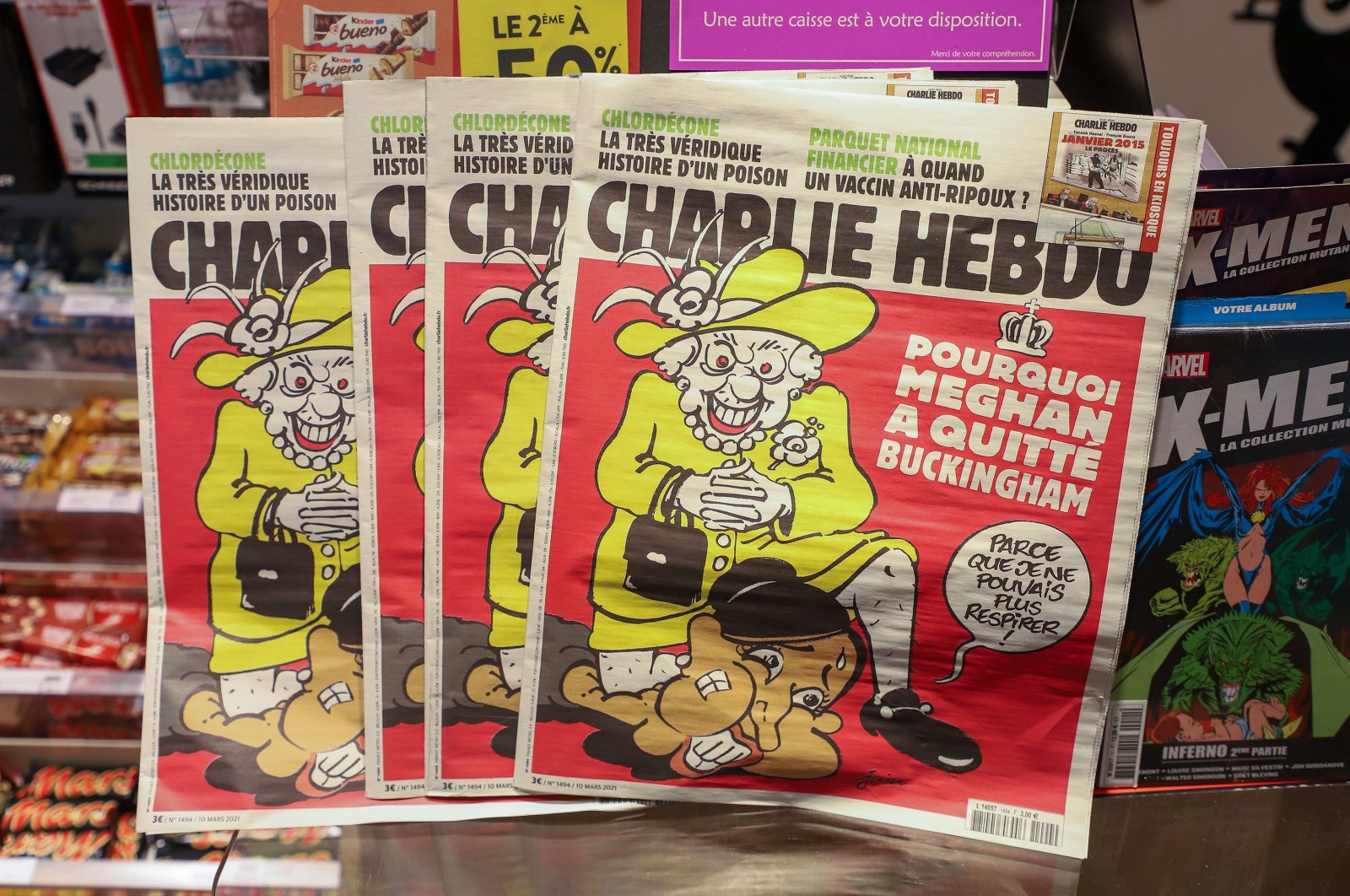 French magazine Charlie Hebdo drew widespread criticism after publishing a cartoon on its front cover in which Queen Elizabeth II is depicted kneeling on Meghan's, the Duchess of Sussex, neck, invoking the death of George Floyd.

The cartoon, which describes itself as a satirical comic, mimics the last moments of Floyd, a black American who died last year after a white police officer kneeled on his neck. Floyd's death sparked Black Lives Matter protests in the U.S. and across the globe.

The cover of Charlie Hebdo follows a television interview where Markle accused members of the British royal family of making racist comments about the skin color of her then-unborn child. Markle has a black mother and a white father.

The cover's caption read: "Why Meghan left Buckingham.” Markle, the Duchess of Sussex and wife of Prince Harry, is shown lying on the ground as the queen is kneeling on her neck, saying: "Because I couldn't breathe anymore.” The magazine's cover was one of the most mentioned topics on social media over the weekend and was mostly criticized.

"This doesnt push boundaries, make anyone laugh or challenge #racism. It demeans the issues & causes offence, across the board.” The Black and Asian Lawyers For Justice tweeted that the cover was "outrageous, disgusting, fascistic racism,” and accused the magazine of using Floyd's trauma for profit.

The Sun used the headline, "DISGUSTING," for the same story.

"Charlie Hebdo: Fury at cover of Queen knelt on Meghan's neck in George Floyd 'parody,'” was the title from The Mirror.

Charlie Hebdo repeatedly came under fire in the past for publishing offensive caricatures of the Prophet Muhammad, sparking large protests in Muslim-majority countries. Twelve cartoonists and employees were killed by a group of terrorists in 2015 after the magazine republished the prophet's cartoons, which were first circulated in 2005 by the Danish newspaper, Jylland-Posten.

In 2020, the magazine republished the controversial cartoons and a French teacher was killed in a terrorist attack after showing them to his students. The French government defends the magazine's often provoking publication, saying that freedom of expression cannot be hindered.

After the latest cover, Twitter users compared previous reactions to new ones. "Now English people will feel the pain of Muslims, Charlie Hebdo is making fun of Queen in very bad manner,” one user wrote.