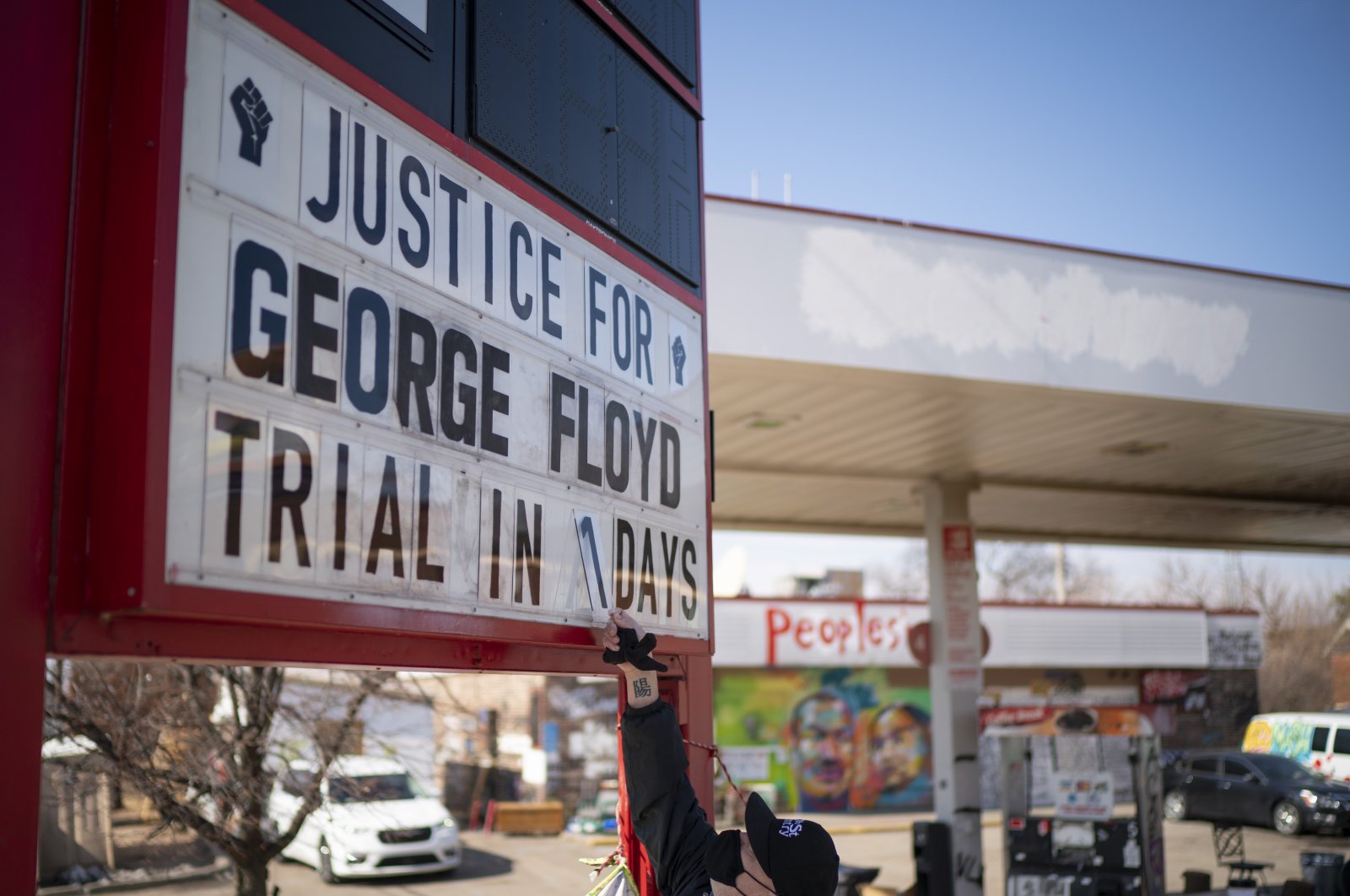 Billy Briggs, who lives just 170 steps from where George Floyd was killed, on Sunday updates a countdown sign to “1” which he maintains at the gas station on the corner of George Floyd Square in Minneapolis, March 8, 2021. (AP)
by Reuters Mar 08, 2021 11:24 am
RECOMMENDED

The trial of former Minneapolis police officer Derek Chauvin over the death of George Floyd begins on Monday with the screening of jurors to weigh murder and manslaughter charges in a case seen as a referendum on police violence against black Americans.

The judge has set aside three weeks for jury selection alone, mindful of the difficulties finding impartial Minneapolitans in a case that has convulsed a nation and in which an image of the victim, a selfie of Floyd faintly smiling, has fast become an international icon of racial justice.

The court mailed prospective jurors an unusually detailed 16-page questionnaire last year asking them what they know about Floyd's death on May 25 on the street after his arrest outside a Minneapolis grocery store.

Among the questions were, “Have they seen video of his death?” Recorded on bystanders' cellphones and police body-worn cameras, the video shows Chauvin, who is white, with his knee on Floyd's neck for nearly nine minutes as Floyd, a 46-year-old black man in handcuffs, pleads for his life before fading into stillness.

“Have they taken part in the protests that followed?” was another question. The video of Floyd's dying words, "I can't breathe," spread online within hours, erupting in one of the largest protest movements ever seen in the United States, with daily marches in cities around the country decrying police brutality and racism.

One other question was “What do they think of Black Lives Matter?” Chauvin's lawyers are expected to challenge the seating of jurors who show support for the movement against racism in the justice system.

Chauvin's lawyers have up to 15 peremptory challenges by which they can exclude a juror without having to cite a reason, while the prosecutors from the Minnesota attorney general's office have nine. If one side suspects the other is challenging a juror on the basis of their race, ethnicity or sex, they can ask the judge to overrule.

Some criminal justice experts fear the resulting 12 jurors and four alternates may not include any black people and that this could undermine public perception of the validity of any eventual verdict. About a fifth of Minneapolis residents are black.

"What all of us should be wanting is a jury that represents the range of views and opinions and demographic characteristics of the community," Valerie Hans, a law professor at Cornell University who studies the jury system, said in an interview. "That should include people that maybe were in protests and have a variety of views on the related issues."

Chauvin, 44, is charged with second-degree murder, which carries a sentence of up to 40 years in prison, and manslaughter. On Friday, the Minnesota Court of Appeals ordered the lower court to reconsider prosecutors' request to also reinstate a third charge, third-degree murder. It was unclear whether that order might delay proceedings.

Meanwhile, dozens of people gathered in front of the Minnesota governor’s mansion on Saturday to demand accountability for police officers, and Minneapolis and Hennepin County officials are set to spend at least $1 million to put up fences and other barricades ahead of the trial in anticipation for more protests.

Chauvin will be tried in a courtroom in the Hennepin County Government Center, a tower in downtown Minneapolis now ringed with fencing and concrete barricades for fear of disruption by protesters. He was released from jail on a $1 million bond last October.

His lawyers have argued that Chauvin, who was fired from the police force the day after Floyd's death, correctly followed his training in helping colleagues arrest Floyd on suspicion of using a counterfeit $20 bill at the Cup Foods grocery store. A handcuffed Floyd can be seen in videos struggling against being placed in a police vehicle complaining he has claustrophobia.

The medical examiner ruled that Floyd's death was a homicide caused partly by police restraint holds. However, the autopsy report also noted that Floyd had recently ingested the opioid fentanyl, and Chauvin's lawyers contend that an overdose was the main cause of death.