Children of Turks, other immigrants, make mark in German politics 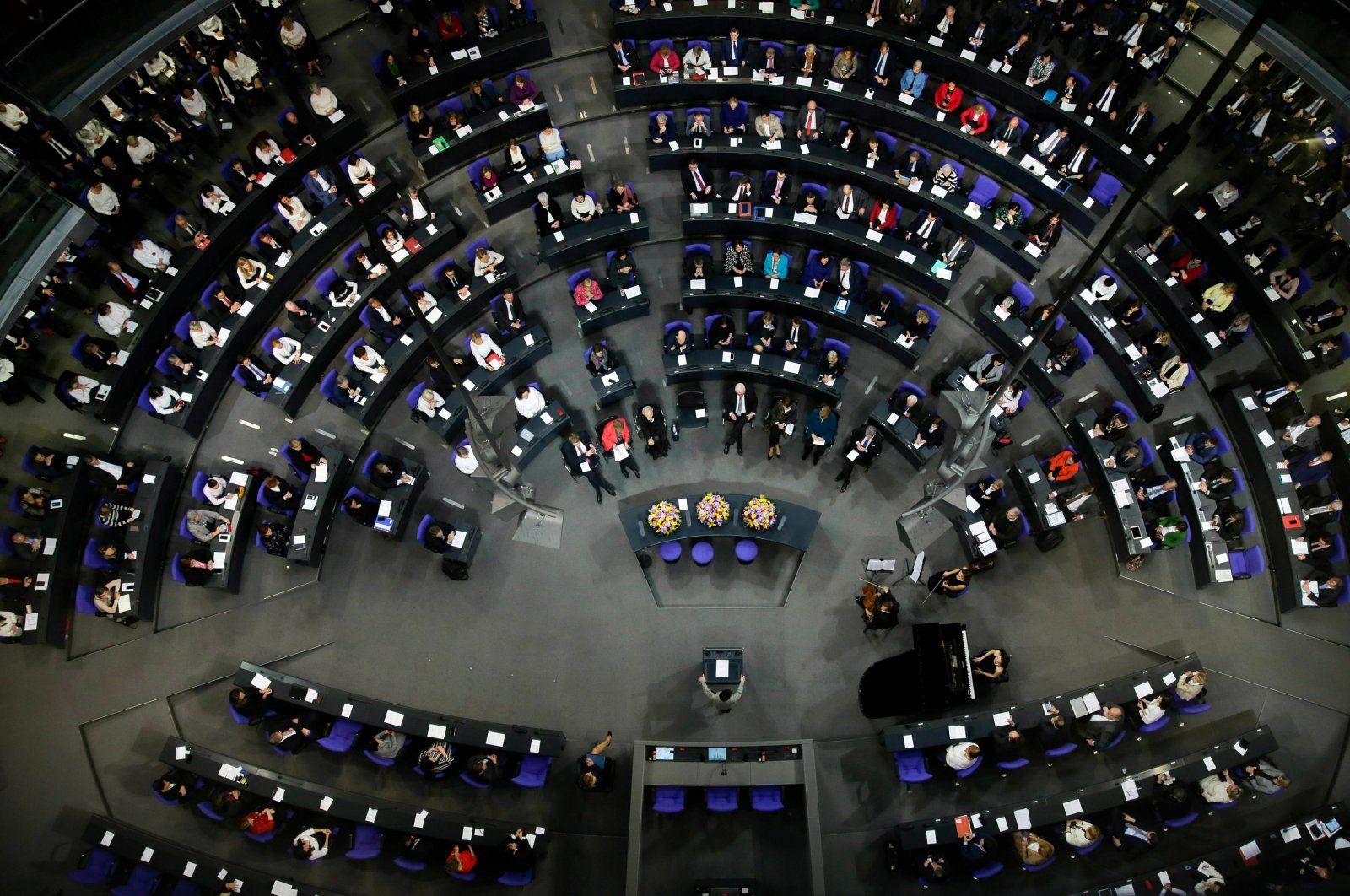 Over a half century ago, West Germany welcomed immigrants from Turkey, Italy, Greece and later Morocco to strengthen the country's economy, and now their children and grandchildren eye seats in the nation's parliament.

Ana-Maria Trasnea was 13 when she emigrated from Romania because her single, working mother believed she would have a better future in Germany. Now 27, she is running for a seat in parliament. "It was hard in Germany in the beginning,” Trasnea said in an interview with The Associated Press (AP).

"But I was ambitious and realized that this was an opportunity for me, so I decided to do whatever I can to get respect and integrate.” Trasnea, who is running for the center-left Social Democrats in Sunday's election, is one of hundreds of candidates with immigrant roots who are seeking a seat in Germany's lower house of parliament, or Bundestag. While the number in office still doesn't reflect their overall percentage of the population, the country's growing ethnic diversity is increasingly visible in politics.

"A lot has changed in Germany in the last few decades. The population has become much more diverse,” says Julius Lagodny, a political scientist at Cornell University in New York who has researched migration and political representation in Germany. "Young immigrants are not only striving for political offices across almost all parties in Germany, they are demanding them. There's a whole new sense of assertiveness now.”

There are about 21.3 million people with migrant backgrounds in Germany, or about 26% of the population of 83 million. The current parliament has 8.2%, or 58 of 709 lawmakers with immigrant roots. The 2013-17 parliament had only 5.9%, or 37 out of 631 lawmakers, according to Mediendienst Integration, an organization tracking migrant issues in Germany.

Of the 6,227 candidates running for parliament, 537 have immigrant roots, said Julia Schulte-Cloos, a political scientist from Munich’s Ludwig Maximilian University specializing in political behavior and discrimination of minorities in Germany and Europe. Schulte-Cloos said the share of Bundestag candidates with immigrant roots has risen continuously since 2005.

Even though the number elected to parliament is expected to rise again this time, it will still fall short of 26% of Germany's population with what is officially termed a "migrant background” – defined as a person either born abroad or with at least one parent who was. In Berlin, where about 35% of residents have foreign roots, immigrant candidates for Bundestag can be found in many parties. Joe Chialo, 51, whose parents are from Tanzania, is competing for a seat for outgoing Chancellor Angela Merkel's center-right Christian Democrats in Berlin's Spandau neighborhood.

Hakan Demir, 31, whose grandfather emigrated from Turkey 50 years ago, is trying to become the Social Democrats' new lawmaker in the Neukoelln neighborhood, one of the most diverse in Germany. Outside the capital, Ezgi Guyildar, the 35-year-old daughter of Kurdish refugees from Turkey, is running with the progressive Left Party in the western city of Essen.

Their motivations include concern over global warming, seeking more rights for women and families, raising the minimum wage and improving the status of immigrants. All four candidates, who are seeking a seat in parliament for the first time, told AP they sometimes experienced discrimination and racism, especially as children. But they also stressed their gratitude for coming to Germany and said they appreciated the education they received, leading to opportunities they might not have had otherwise.

Chialo, a music industry manager tapped by Merkel's would-be successor, Armin Laschet, as one of his advisers, is the son of Tanzanian diplomats. He was born in Bonn and raised in boarding schools after his parents went on to other diplomatic duties abroad.

"In the beginning, my brother and I were the only two black kids at a school with 1,000 students," Chialo said. "The sentence, 'Oh look, there's a negro,' tells you how unusual we and also many other black people of my age were at the time in Germany.”

Trasnea, who works for Berlin's education department and is running in the city’s Koepenick-Treptow district, can't forget how other teenagers in high school threw stones at her and accused her of coming to Germany only to collect welfare. Guyildar remembers how kids had snitched on her and other children for speaking Turkish in the schoolyard, which was not allowed. Demir is still embarrassed when he remembers lying to classmates from academic families that his father was a chemical technician, ashamed of his real job as an unskilled worker at a chemical company. As an adult living in the ethnically diverse Berlin neighborhood of Neukoelln, Demir sees political advantages in his background.

"People from more than 150 nations live in this district – it's a great mix and very diverse,” said Demir, who previously worked for another immigrant lawmaker, Karamba Diaby.

"Of course, when I notice somebody wants to speak Turkish, I do that and that right away creates a kind of intimacy which is important during the election campaign. It makes people feel involved.”

More than 60 years ago, West Germany recruited "guest workers” from Turkey, Italy, Greece and later Morocco to help the country advance economically. They were employed in coal mining, steel production and the auto industry. Many who initially came as temporary workers decided to stay and bring their families, giving Berlin and other cities in western and southwestern Germany large immigrant communities.

Others followed in subsequent decades: people from Russia or Kazakhstan who could claim German ancestry; refugees from Lebanon's civil war; Jews from the former Soviet Union; and Eastern Europeans who took advantage of the free movement within the European Union. From 2005-2016, another wave of more than 1 million arrived, fleeing war in Syria, Iraq and Afghanistan.

About 7.4 million migrant adults have German passports and are eligible to vote Sunday, according to 2019 figures from the Federal Statistical Office (Destatis). Many often don't vote, however, and therefore are underrepresented in parliament. Another 8.7 million adults living permanently in Germany can't vote because they don't have German citizenship. Germany doesn't allow dual citizenship, except for nationals of other EU countries and Switzerland.

That's a dilemma for many first-generation immigrants who still have close ties to their home countries and don't want to give up their old passport – either for emotional reasons or out of fear they could lose inheritance rights or property in the countries of their birth. Allowing dual citizenship is one issue Guyildar wants to fight for, if elected.

"I can feel close to Turkey, have my grandmother living there, and still consider Germany my homeland," she said. "There's nothing wrong about dual citizenship – on the contrary." Sometimes, however, not having a German passport isn't the only barrier to running for office or even voting.

First-generation immigrants, in particular, often are more focused on politics in their former countries.

"There's sometimes this barrier caused by discrimination or also by closed migrant societies here, in which the parents or grandparents are more interested in what's happening in the home countries than in the current politics here," says Canan Bayram, 55, a German-Kurdish lawyer who was elected to the Bundestag in 2017 for the Green party.

Bayram believes, however, that will change as more immigrants run for office.

"I think it is only another small step, and in 10 years we won't even talk about these topics that intensively anymore because the new generation now is clearly forward-looking and has found their center of life in Germany,” she said.