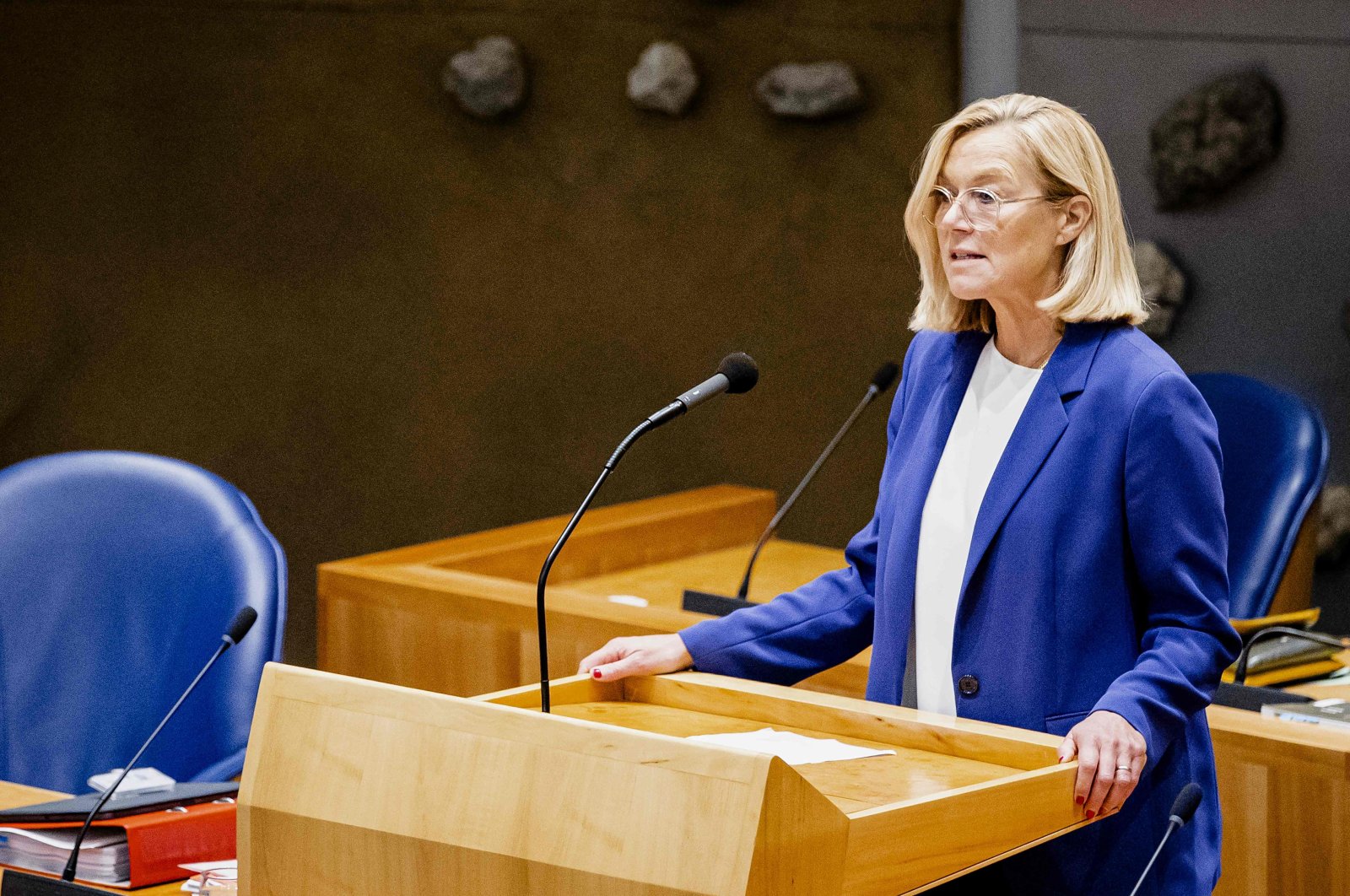 Outgoing Minister Sigrid Kaag of Foreign Affairs (D66) speaks as she resigns at the House of Representatives in the Hague, the Netherlands, Sept. 16, 2021. (AFP Photo)
by Agencies Sep 16, 2021 10:12 pm
RECOMMENDED

After harsh criticism from lawmakers over the failed evacuation of Dutch nationals and others from Afghanistan, Dutch Foreign Minister Sigrid Kaag has resigned from her position.

The parliament backed a censure motion against Kaag with 78 votes in favor and 72 against after blaming her for the failed evacuation.

There was a similar censure motion against Christian Democratic Defence Minister Ak Bijleveld, who decided to stay in office.

Kaag was only acting minister and had only been in the post since May. A new coalition government has not yet been formed since the parliamentary elections in March.

"The parliament judges that the Cabinet acted irresponsibly, so I can't do anything other than accept the consequences," Kaag said.

Kaag's resignation comes a day after Britain's Dominic Raab was demoted from his position as foreign minister over the way he dealt with the situation in Afghanistan.

"Although I stand by our commitment, I can only accept the consequences of this judgment as the minister with ultimate responsibility," Kaag said.

"In my view on democracy and the culture of our administration, a minister should go if the policy is disapproved of. I will therefore submit my resignation as minister of foreign affairs to his majesty the king," she added.

Kaag said she would stay on as leader of the center-left D66 party, which is in coalition talks with Prime Minister Mark Rutte after winning the second-most seats in elections in March.

Rutte said her resignation was a "great loss" to the Cabinet.

The Netherlands evacuated more than 1,500 people, both Dutch nationals and eligible Afghans, in the final chaotic days before the United States pulled out of Afghanistan.

But many Afghans were left behind, including 22 interpreters, according to the government, despite calls from MPs to evacuate them months ago.

Kaag admitted during the debate that the government "had a whole blind spot in how quickly it would get that bad" in Afghanistan, but said other countries had been in a similar position.

Dutch lawmakers from across the political spectrum lined up to criticize the government during a parliamentary debate on Afghanistan Tuesday.

"How is it possible that there are still dozens of defense interpreters in Kabul?" said Jeroen van Wijngaarden, an MP from Prime Minister Rutte's VVD party.

Ministers were accused of being "apathetic" and mired in "slowness and vagueness" during the evacuation crisis.

The sense of chaos was fuelled by reports in local media that the Dutch ambassador had been begging the government since March 2020 to make preparations, but that ministers only decided two days before the fall of Kabul.

The debacle has stirred bitter memories in the Netherlands of another foreign policy failure when Dutch peacekeepers failed to prevent the 1995 Srebrenica genocide during the Bosnian War.

Dutch broadcaster NOS said it would have been "very difficult" for Kaag to stay on, given that after elections she had made strong calls for political change.

Kaag had herself called on Rutte to resign in April after he too was condemned by parliament over claims he lied about coalition talks, but the premier clung on.

The Afghan row now threatens to further complicate coalition talks that have dragged on since the elections, with a caretaker government still in place six months on.