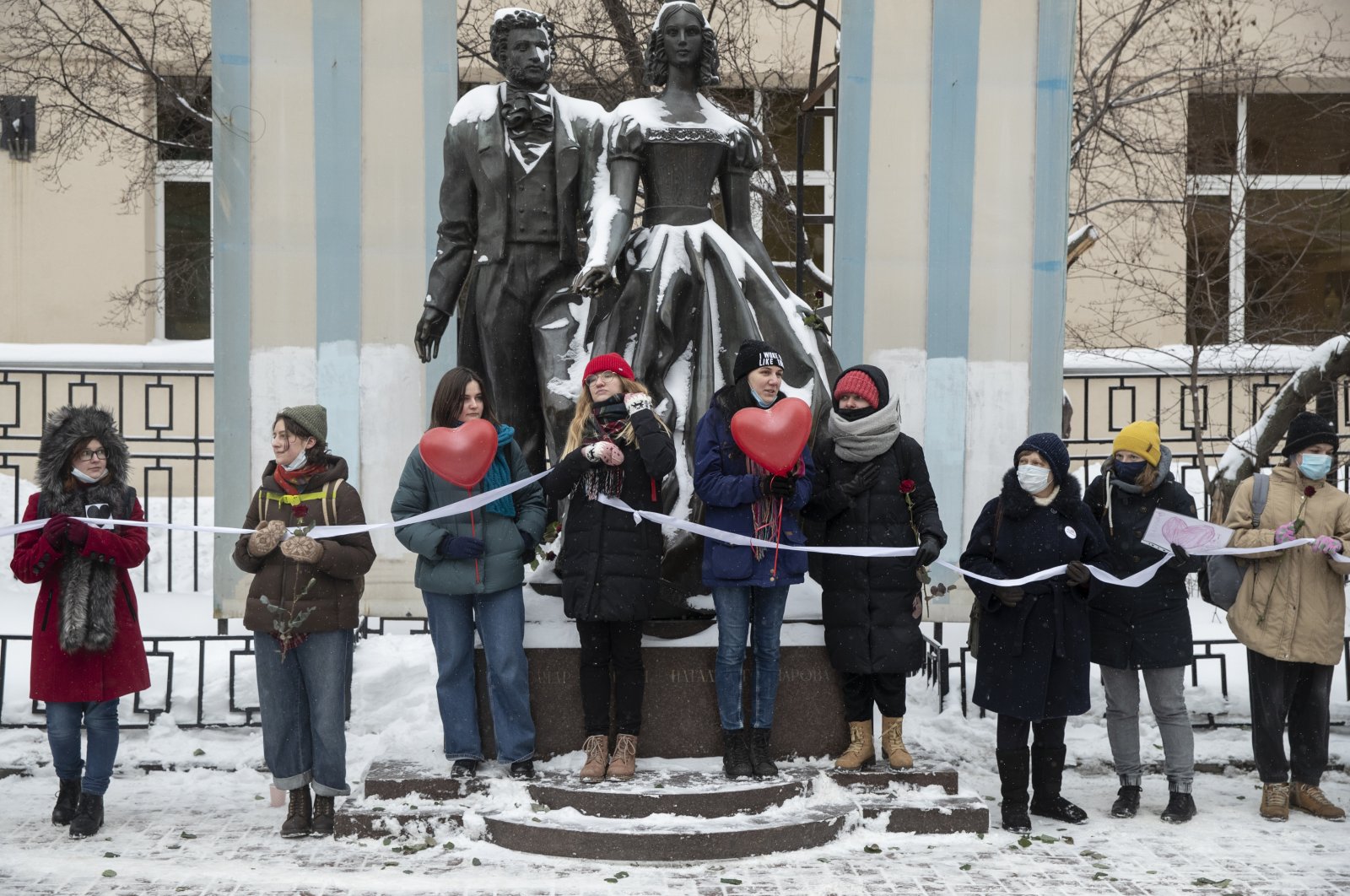 Women hold a white ribbon as they stay in a line during a rally in support of jailed opposition leader Alexei Navalny, and his wife Yulia Navalnaya in Moscow, Russia, Feb. 14, 2021. (AP Photo)
by French Press Agency - AFP Feb 14, 2021 6:46 pm
RECOMMENDED

The gathering came after authorities last week sentenced Navalny, President Vladimir Putin's most prominent critic, to nearly three years in prison and unleashed a crackdown on his supporters.

Female activists said they wanted to express solidarity with Navalny's wife Yulia and other women who have become victims of the crackdown.

"By forming a chain we want to show that we are for love and against violence," Darya Obraztsova, a 22-year-old student, told Agence France-Presse (AFP) in Moscow.

"Very brave and nice young women have gathered here," she said, adding she wanted "freedom and justice" for Russia.

In the second city Saint Petersburg, some 100 women formed a similar chain near a monument to victims of political repression.

Some clutched flowers, while others recited poems by Anna Akhmatova, one of Russia's most beloved poets.

The new form of opposition rallies is similar to human chains formed by female activists in neighboring Belarus.

Navalny was arrested and jailed upon returning to Russia last month following treatment in Germany for a nerve agent poisoning.

His jailing sparked widespread protests across Russia that have seen at least 10,000 people detained.

After the crackdown, Navalny's team postponed mass rallies until the spring or summer but urged supporters to use Valentine's Day to try out new – and safer – forms of protest.

Navalny's right-hand man Leonid Volkov has called on Russians to stage courtyard protests on Sunday evening, lighting their phone flashlights for 15 minutes and posting pictures of the gatherings on social media.

"Love is stronger than fear," said an electronic ticker tape on a residential high-rise in the Siberian city of Tomsk, according to a video released by Navalny's team.

The courtyard rallies in Moscow and Saint Petersburg were expected to begin at 1500 GMT.

Officials have accused the opposition of acting on orders from NATO and warned that anyone violating the law would be punished.

"We will not play cat and mouse with anyone," Putin's spokesperson Dmitry Peskov said.