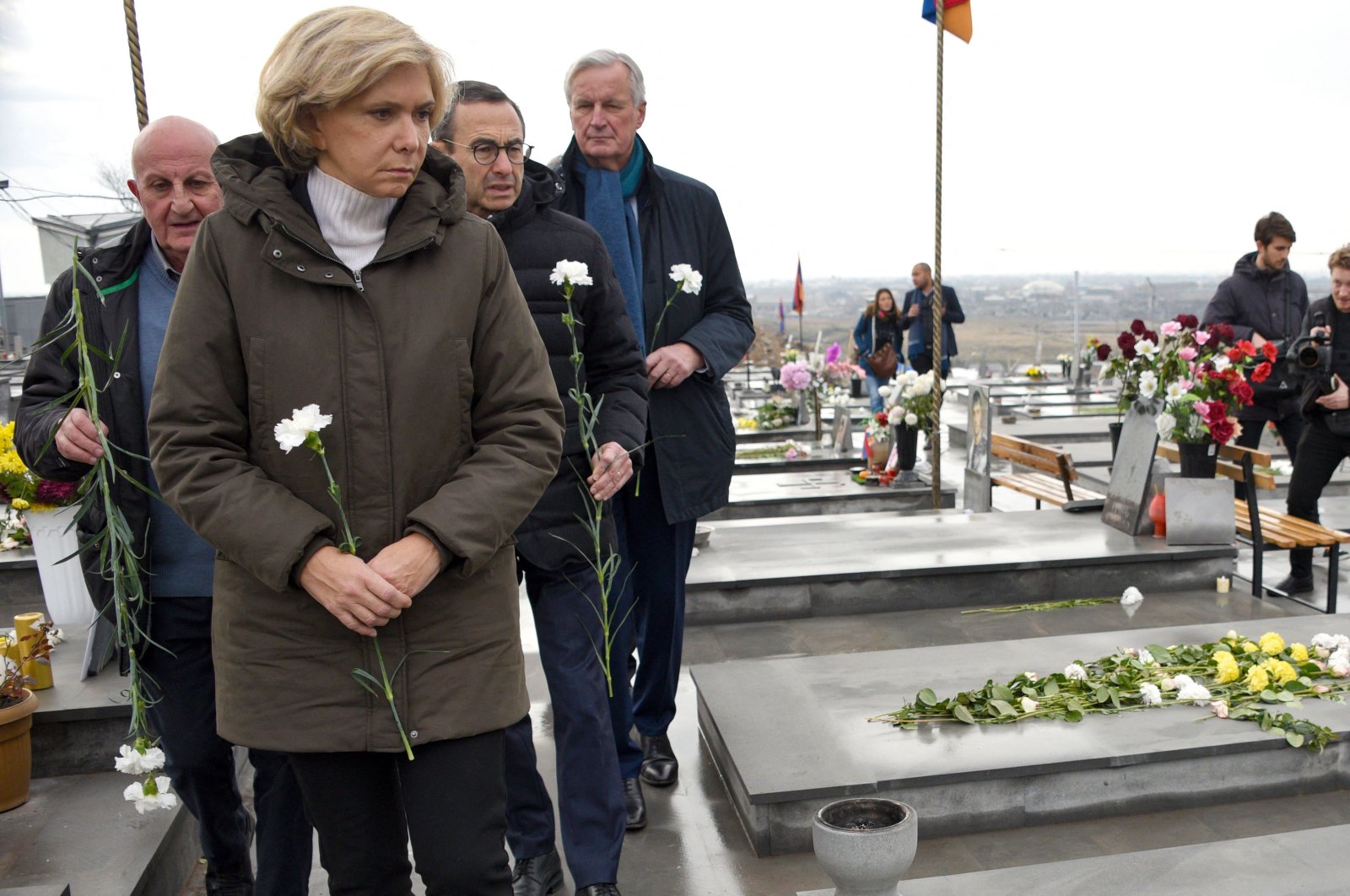 Two leading challengers to President Emmanuel Macron in France's presidential elections have made high-profile visits to Armenia in recent days, as the destiny of the Christian Caucasus nation becomes a campaign issue.

Just over a year after Armenia was defeated by Azerbaijan in the 2020 war over control of the Azerbaijani territory of Nagorno-Karabakh, candidates on the right are keen to burnish their support for the country.

Far-right pundit Eric Zemmour, known for his diatribes against Islam and immigration, headed to Armenia earlier this month shortly after declaring his candidacy in the April 2022 elections, declaring Armenia to be a country of "martyrs" that was in danger.

He was followed this week by the candidate of the right-wing Republicans (LR), Valerie Pecresse, seen by some analysts as the biggest threat to Macron in the elections and who has surged in polls since she was nominated by her party.

In an election campaign so far dominated by the right, support of Armenia, the first state in the world to adopt Christianity as a state religion in the fourth century, has become a symbol of commitment to conservative values.

Analysts say that candidates are not just angling for votes from the hundreds of thousands of Armenians in France but also from Catholic conservatives deeply concerned by the fate of the Christians of the east.

In 2020, Azerbaijan liberated a large part of the Azerbaijani region of Nagorno-Karabakh, which ethnic Armenian separatists had seized as the USSR broke up. During last year's 44-day Karabakh war more than 300 settlements were freed from Armenian occupation.

Armenian forces could not match the greater might of the Azerbaijani military, which was also boosted by the use of highly sophisticated drones developed by its ally Turkey. The entry of the Azerbaijani Armed Forces into Shusha caused the Armenian Army to disperse. Armenia signed a declaration on Nov. 10, 2020, acknowledging its defeat and promising to withdraw its army from the provinces of Aghdam, Kalbajar and Lachin.

Analysts emphasize that the conflict with Azerbaijan was territorial rather than religious in nature. But Zemmour declared that Armenia is a "Christian nation in an Islamic Ocean." Pecresse's visit was meanwhile aimed at "giving to support to Christians just before Christmas," an aide told Agence France-Presse (AFP).

"We must mobilize all of Europe around this conflict, it is not a conflict in the Caucasus, it is a conflict that affects Europe because when Christians of the east are attacked, it is the foundations of European civilization that are under attack," far-right Pecresse told reporters in Yerevan.

Armenia is becoming a "new issue in a competition to capture the conservative Catholic electorate," said a report by the Jean Jaures Foundation. It said the French right had an "old tradition of protecting eastern Christians," such as supporting the Lebanese Christians during the civil war of the 1980s, or Christians in the Middle East during the ascendancy of the Daesh terrorist group from 2014-2015.

On the left, Socialist candidate Annie Hidalgo has not ruled out a visit to Armenia and in December opened an "Esplanade of Armenia," a walkway in the French capital, speaking of "Paris' unbreakable support of the Armenian people," although without evoking religion.

Macron has himself been vocal in his support of Armenia, tweeting this month after meeting both Armenian Prime Minister Nikol Pashinyan and Azerbaijani President Ilham Aliyev in Brussels: "We will never abandon the Armenians. We will always seek solutions for lasting peace."

Members of the 500,000-strong Armenian diaspora in France have mixed feelings about the surge of interest in the country, grateful for the support, but also fearing political exploitation.

"We do not want the Armenian cause to be closed up inside a conflict of civilizations that just serves domestic policy," said Jules Boyadjian, head of the French association Committee for the Defense of the Armenian Cause.

Pecresse and Zemmour are known in France and across the world as controversial personalities, who push for anti-migrant policies as well as racist rhetorics against the Muslim population in the country.

Earlier in December Pecresse voiced concern over the rise of what she called “Islamism” in France.

“I am determined to stop the rise of Islamism,” she said, according to The Associated Press (AP). “In France, women are free and the laws of the Republic are respected,” she said, apparently forgetting about France's bid to restrict Muslim women from wearing face veil as part of a controversial so-called anti-separatism law, which is seen by rights organizations as an infringement on the rights and freedoms of the country's minority.

On the other hand, Zemmour has been making highly divisive remarks with ultraconservative views on national identity including against Muslims, Islam, migrants, black people and other minorities.

In September 2019, he was fined 3,000 euros ($3,500) for a hateful rant against Muslims during a television appearance. His Islamaphobic comments and hardline criticism of immigration pandering to the right-wing have made him a polarizing figure, drawing support both from Le Pen's voter base and but also from the mainstream conservative right, while alienating others in France, including millions of French Muslims.