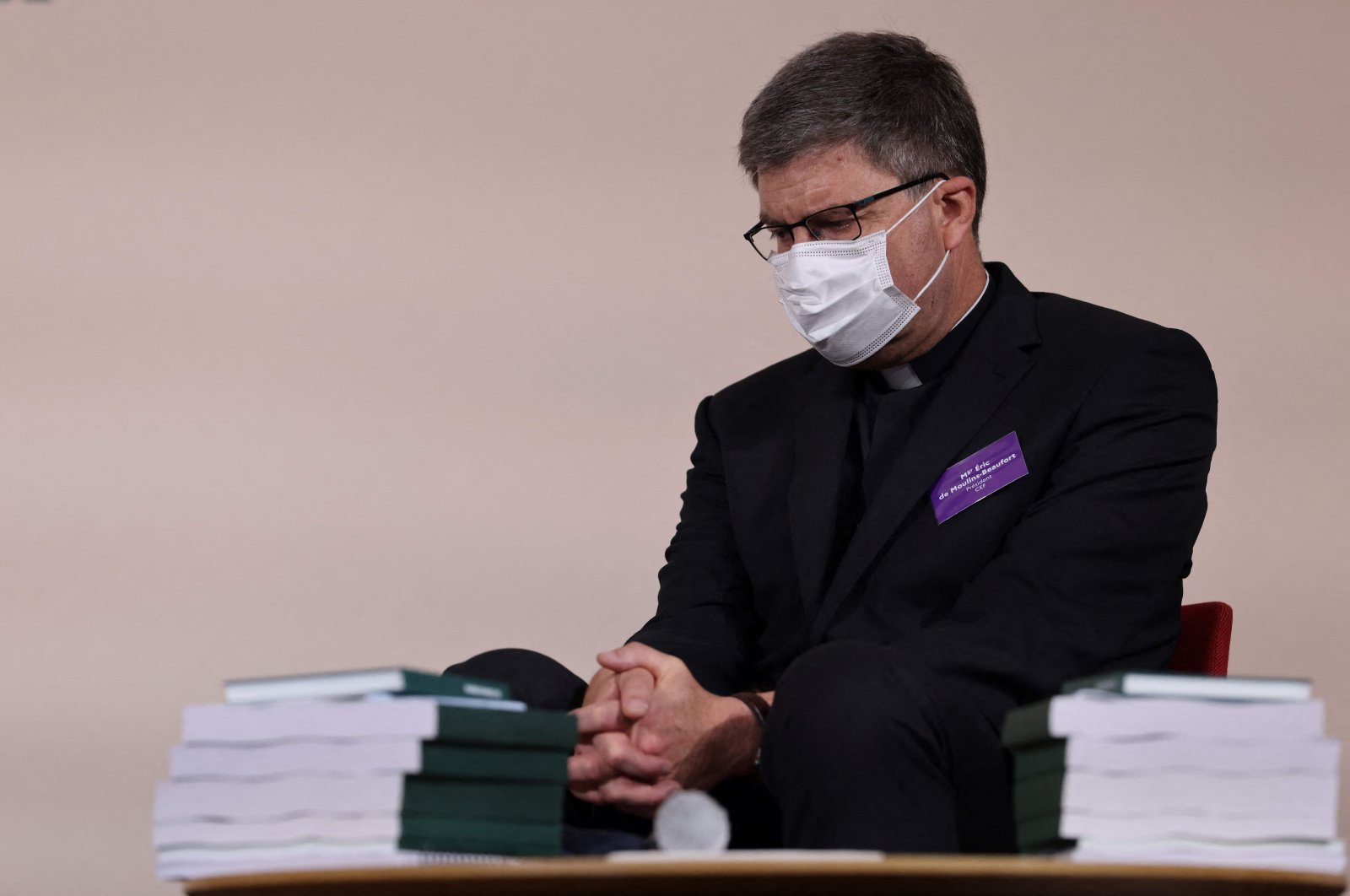 Catholic Bishop Eric de Moulins-Beaufort, president of the Bishops' Conference of France (CEF), attends the publishing of a report by an independent commission into sexual abuse by church officials, Paris, France, Oct. 5, 2021. (AFP Photo)
by DAILY SABAH WITH AGENCIES
Oct 05, 2021 11:07 am

An independent investigation into sexual abuse within the French Catholic Church has revealed that an estimated 330,000 children were preyed upon since 1950, to which the religious institution showed ‘deep, total and cruel indifference for years’

A major French report released Tuesday found that an estimated 330,000 children were victims of sex abuse within France’s Catholic Church over the past 70 years, in France's first major reckoning with the devastating phenomenon.

The president of the commission that issued the report, Jean-Marc Sauve, said the estimate, based on scientific research, includes abuses committed by priests and others clerics as well as by non-religious people involved in the church. He said about 80% are male victims.

"Until the early 2000s the Catholic Church showed a profound and even cruel indifference towards the victims," Sauve said at a press conference according to remarks carried by Reuters. "About 60% of men and women who were sexually abused encounter major problems in their sentimental or sexual life.”

Sauve condemned the "systemic character" of efforts to shield clergy from pedophilia claims and urged the Catholic Church to pay financial compensation to the victims without waiting for judicial progress.

The 2,500-page document prepared by an independent commission comes as the Catholic Church in France, like in other countries, seeks to face up to shameful secrets that were long covered up. The report said an estimated 3,000 child abusers – two-thirds of them priests – worked in the church during that period. Sauve said the overall figure of victims includes an estimated 216,000 people abused by priests and other clerics.

The commission was established by Catholic bishops in France at the end of 2018 to shed light on abuses and restore public confidence in the Church. Sauve said that the problem was still there.

Olivier Savignac, head of victims association "Parler et Revivre” (Speak out and Live again), who contributed to the probe, told The Associated Press (AP) that the high ratio of victims per abuser is particularly "terrifying for French society, for the Catholic Church."

The commission worked for 2 1/2 years, listening to victims and witnesses and studying church, court, police and press archives starting from the 1950s. A hotline launched at the beginning of the probe received 6,500 calls from alleged victims or people who said they knew a victim. Sauve denounced the church’s "systemic negligence and silence from hierarchy over abuse."

They were "not believed or not heard” and sometimes suspected of being "in part responsible” for what happened, he deplored. Sauve said 22 alleged crimes that can still be pursued have been forwarded to prosecutors.

More than 40 cases that are too old to be prosecuted but involve alleged perpetrators who are still alive have been forwarded to church officials. The commission issued 45 recommendations about how to prevent abuse. These included training priests and other clerics, revising Canon Law – the legal code the Vatican uses to govern the church – and fostering policies to recognize and compensate victims.

Sauve emphasized that the Catholic Church's teaching on subjects such as sexuality, obedience and the sanctity of the priesthood helped "create blind spots which helped allow sexual abuse by clergy to happen." He said the church needed to reform the way it approached those issues to rebuild trust with society.

The report comes after a scandal surrounding now-defrocked priest Bernard Preynat rocked the French Catholic Church. Last year, Preynat was convicted of sexually abusing minors and given a five-year prison sentence. He acknowledged abusing more than 75 boys for decades.

One of Preynat's victims, Francois Devaux, head of the victims group La Parole Libérée ("The Liberated Word"), told AP that "with this report, the French church for the first time is going to the root of this systemic problem."

"The deviant institution must reform itself,” he said adding that the number of victims the report identifies is "a minimum.”

"Some victims did not dare to speak out or trust the commission,” he said, expressing concerns that the church in France still "hasn’t understood” and has sought to minimize its responsibilities. The church must not only acknowledge events but also compensate victims, Devaux said.

"It is indispensable that the church redresses the harm caused by all these crimes, and (financial) compensation is the first step.”

The Preynat case led to the resignation last year of the former archbishop of Lyon, Cardinal Philippe Barbarin, who has been accused of failing to report the abuses to civil authorities when he learned about them in the 2010s.

France’s highest court ruled earlier this year that Barbarin did not cover up the case. French archbishops, in a message to parishioners read during Sunday Mass across the country, said the publication of the report is "a test of truth and a tough and serious moment.”

"We will receive and study these conclusions to adapt our actions,” the message said. "The fight against pedophilia concerns all of us... Our support and our prayers will keep going toward all the people who have been abused within the church.”

Shortly after the report was published the president of the French Bishops' Conference, Eric de Moulins-Beaufort, said Tuesday "we are appalled” at the conclusions of the report. "I wish on that day to ask for pardon, pardon to each of you,” he told the victims, expressing "shame and horror."

Pope Francis issued in May 2019 a groundbreaking new church law requiring all Catholic priests and nuns around the world to report clergy sexual abuse and cover-ups by their superiors to church authorities.

In June, Francis swiftly rejected an offer from Cardinal Reinhard Marx, one of Germany’s most prominent clerics and a close papal adviser, to resign as archbishop of Munich and Freising over the church’s mishandling of abuse cases. But he said a process of reform was necessary and every bishop must take responsibility for the "catastrophe” of the crisis.

It revealed that 314 minors, mostly boys under the age of 14, were sexually abused there between 1975 and 2018. A German Bishops' Conference study in 2018 had previously revealed widespread sexual abuse by German clergy. It found that 1,670 clergymen had committed some type of sexual attack against 3,677 minors, mostly boys under 13, between 1946 and 2014, while saying this was almost certainly an underestimate. Most perpetrators have not been punished and the church grants compensation on a case by case basis, without transparency.

Almost a decade ago the Boston Globe newspaper launched an investigation into the sexual abuse of children by members of the Catholic Church in the U.S., triggering a massive scandal and a wider conversation about systematic negligence and human rights violations within the religious institution. The series of reports by the Boston Globe also revealed efforts by the Catholic Church to cover up crimes by silencing victims and moving priests from one diocese to another, giving the predators an opportunity to maintain service and their crimes.

The probe was the subject of the Oscar-winning movie "Spotlight" which drew worldwide attention yet again to child sexual abuse in the Catholic Church across the world. The Boston Globe's 2002 investigation triggered a spate of probes across the world, catching more and more priests and other members of the church committing crimes.

More than 11,000 complaints have been filed in the U.S. by priests' victims and dioceses were forced to pay out hundreds of millions of dollars in out of court settlements. However, the victims claimed the payments allowed the church to go unpunished.

A grand jury investigation into Pennsylvania dioceses in 2018 exposed the systematic cover-up by the church of abuse by "over 300 predator priests." More than 1,000 child victims were cited.