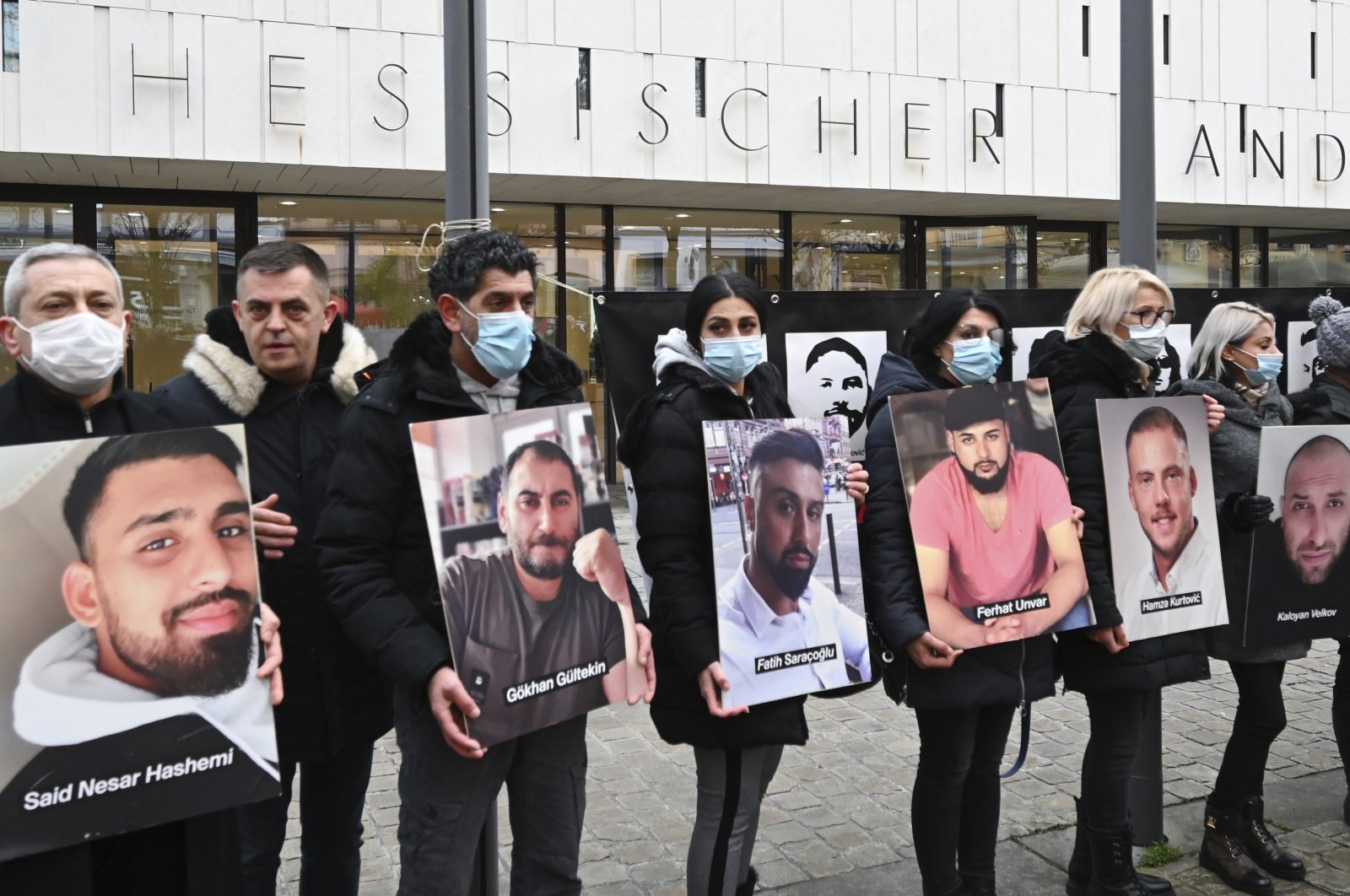 Relatives of the victims of the racist attack in Hanau in 2020 hold photos of the victims during a vigil in front of the Hesse parliament in Wiesbaden, Germany, Dec. 3, 2021. (AP Photo)
by German Press Agency - DPA Dec 16, 2021 4:47 pm
RECOMMENDED

The investigation into a racist attack that killed nine people of immigrant backgrounds, including five Turks, in the German town of Hanau on Feb. 19, 2020 was closed after no evidence was found to suggest that the far-right attacker had accomplices or assistance, prosecutors said on Thursday.

"After exhausting all relevant investigative approaches, no sufficient factual indications of the involvement of further persons as accomplices, instigators, or accessories have emerged," the federal prosecutor's office in Karlsruhe said.

As a result of the investigations, prosecutors determined that the 43-year-old, known as Tobias R. under German privacy laws, killed nine people and injured numerous others, some of them seriously, at two shisha bars.

The attack was "motivated by racism," prosecutors say.

He then returned to his parents' house, where he first shot and killed his mother, and then himself.

"In total, more than 400 witnesses were questioned and several hundred pieces of evidence were examined by forensic experts," the prosecutors said. "No indications have emerged that other persons could have been privy to Tobias R's attack plans."

A criminal complaint filed against Tobias R.'s father by several relatives of the victims and survivors of the attack will not lead to a preliminary investigation, the prosecutors say.

In the complaint, they had accused the attacker's father of aiding and abetting the murders, or at least of not reporting planned criminal acts. However the investigators found that "no suspicions were brought to light that the assassin's father was in any way involved in the killings or even had prior knowledge of them."

The circumstances surrounding the acquisition of the firearms used in the attacks had not led to any conclusions about possible other participants or accomplices, prosecutors said. "The firearms were legally in the possession of Tobias R. The investigations have not brought to light any indications that the respective previous owner considered it possible that Tobias R had committed an attack."

The prosecutors say that the same applies to the organizers of shooting training abroad, which the perpetrator had attended, as well as to the members of shooting clubs of which he was a member. "Tobias R carried out the actions in connection with the preparation of the crime alone and on his own responsibility."

Relatives of the victims of the attack have joined forces in the "Initiative 19 February Hanau." They demand a complete investigation into the crime and want consequences.

The Turkish community in Germany, one of the largest with a population of over 3 million people, grew from small groups of Turkish "guest workers" brought to rebuild post-World War II Germany. Over the decades, they rose to a prominent place in society, however, neo-Nazi threats and xenophobia – or rather an anti-Turkish sentiment – remained a major concern for the community as is evident in the attacks specifically targetting them. Neo-Nazi groups, to which authorities turned a blind eye most of the time, are responsible for a range of crimes, from minor acts of vandalism at Turkish mosques to serial murders.

In reaction to the discontinuation of the investigation, the initiative stated that the role of Tobias R.'s father was "not fully investigated." They believe there are still unanswered questions to do with the perpetrator's gun permit and the Hanau police emergency number 110, which was overloaded the night of the crime. Failure on the part of the authorities is therefore still in the air.

An investigation by the Hesse state parliament is currently underway, which is primarily looking into the question of whether mistakes were made by the authorities before, during or after the crime.

In the second public session of the committee this Friday, three more relatives of attack victims will be heard as witnesses, followed by two more public sessions on Dec. 20 and Jan. 21.