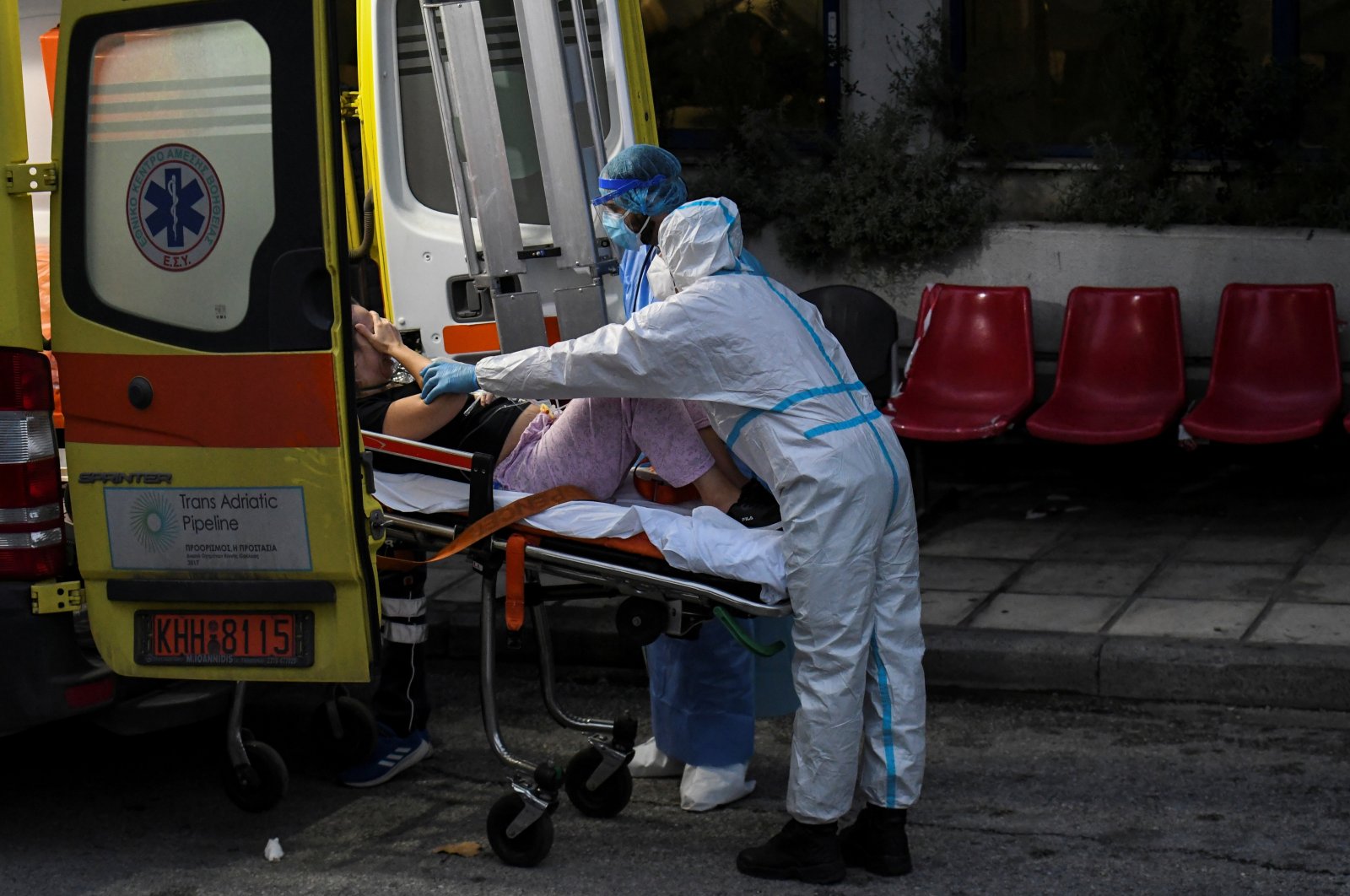 Medical workers wearing personal protective equipment carry a patient on a stretcher, as she arrives on an ambulance at the COVID-19 ward of the Ippokrateio General Hospital in Thessaloniki, Greece, Nov. 3, 2021. (Reuters Photo)
by Agencies Nov 08, 2021 10:29 am
RECOMMENDED

Global COVID-19 cases passed the 250 million threshold on Monday despite the delta variant surging easing, as some counties in Eastern Europe experienced record outbreaks while others resume trade and tourism.

The daily average number of cases has fallen by 36% over the past three months, according to a Reuters analysis, but the virus is still infecting 50 million people every 90 days due to the highly transmissible delta variant. By contrast, it took nearly a year to record the first 50 million COVID-19 cases.

Health experts are optimistic that many nations have put the worst of the pandemic behind them thanks to vaccines and natural exposure, although they caution that colder weather and upcoming holiday gatherings could increase cases.

"We think between now and the end of 2022, this is the point where we get control over this virus ... where we can significantly reduce severe disease and death," Maria Van Kerkhove, an epidemiologist leading the World Health Organization (WHO), told Reuters on Nov. 3.

Infections are still rising in 55 out of 240 countries, with Russia, Ukraine, Germany and Greece at or near record levels of reported cases since the pandemic started two years ago, according to a Reuters analysis.

Germany's coronavirus infection rate climbed to its highest recorded level yet on Monday as what officials have called a "pandemic of the unvaccinated” gathers pace. The national disease control center, the Robert Koch Institute, said the country has seen 201.1 new cases per 100,000 residents over the past seven days. That was above the previous record of 197.6 from Dec. 22 last year.

While it's still a lower rate than in several other European countries, it has set alarm bells ringing. The seven-day infection rate has long ceased to be the only yardstick for COVID-19 policy in Germany, but officials say hospitals are filling up in badly affected areas. The disease control center said Monday that 15,513 new cases were reported over the past 24 hours – down from a record 37,120 on Friday, but figures are typically lower after the weekend.

Germany has struggled to find ways to pep up its much-slowed vaccination campaign. At least 67% of the population of 83 million is fully vaccinated, according to official figures, which authorities say isn't enough. Unlike some other European countries, it has balked at making vaccinations mandatory for any professional group.

As at many times during the pandemic, Germany has a patchwork of regional rules. Most places restrict access to many indoor facilities and events to people who have been vaccinated, have recovered or been tested – with the latter now being excluded in some areas.

Those rules are often enforced laxly. Rules on whether schoolchildren must wear masks in class vary from state to state. Free rapid tests for all were scrapped nearly a month ago in an effort to incentivize more people to get vaccinated. There are now widespread calls for them to be reintroduced. And officials now advocate booster vaccinations for everyone who got their initial shots six months ago or more. Germany currently has a caretaker national government after its election in September.

The parties that are expected to form the next government plan to bring legislation to parliament this week that would allow an "epidemic situation of national scope,” in place since March 2020, to expire at the end of the month but provide a new legal framework for coronavirus measures, as The Associated Press (AP) reported.

Meanwhile, Eastern Europe has among the lowest vaccination rates in the region. Ukraine's Health Ministry on Saturday reported a one-day record of 793 deaths from COVID-19. Ukraine has been inundated by coronavirus infections in recent weeks, putting the country's underfunded medical system under severe strain. The ministry said 25,063 new infections had been tallied over the past day; a record 27,377 were reported on Thursday.

Although four different coronavirus vaccines are available in Ukraine, only 17.9% of the country's 41 million people have been fully vaccinated, the second-lowest rate in Europe after Armenia. In a bid to stem contagion, Ukrainian authorities have required teachers, government employees and other workers to get fully vaccinated by Nov. 8 or face having their salary suspended.

More than half of all new infections reported worldwide were from countries in Europe, with a million new infections about every four days, according to the analysis. Several Russian regions said this week they could impose additional restrictions or extend a workplace shutdown as the country witnesses record deaths due to the disease. The country reported 39,400 new COVID-19 cases on Monday, including 4,982 in Moscow.

Several world leaders have stressed the need to improve vaccination programs around the world, particularly in the least wealthy countries. More than half the world's population has yet to receive a single dose of a COVID-19 vaccine, according to Our World in Data, a figure that drops to less than 5% in low-income countries.

Improving vaccine access will be on the agenda of meetings of the powerful Asia-Pacific trade group APEC, hosted virtually by New Zealand this week. APEC members, which include Russia, China and the United States, pledged at a special meeting in June to expand sharing and manufacturing of COVID-19 vaccines and lift trade barriers for medicines.

"Together we are continuing to keep supply chains functioning and are supporting trade in critical medical supplies – including testing kits, PPE and now vaccines," New Zealand Prime Minister Jacinda Ardern said on Monday.

The WHO and other aid groups last month appealed to leaders of the world's 20 biggest economies to fund a $23.4 billion plan to bring COVID-19 vaccines, tests and drugs to poorer countries in the next 12 months.