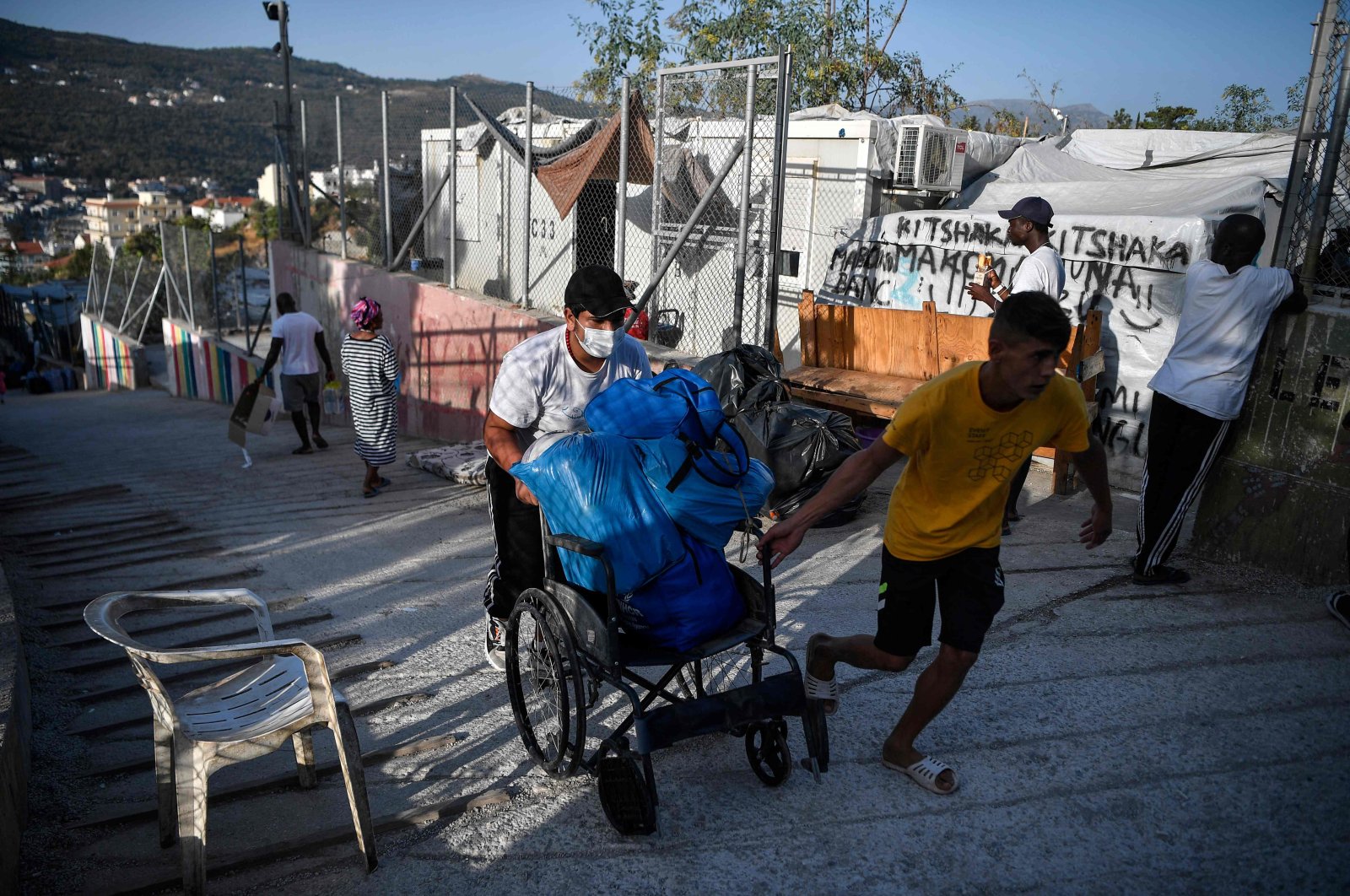 Men carry belongings on a cart at the old Vathy camp, on the island of Samos before being transferred to the new Samos RIC, the first of five new "closed" migrant camps, Greece, Sept. 20, 2021 (AFP Photo)
by French Press Agency - AFP Sep 20, 2021 2:04 pm
RECOMMENDED

Greece on Monday began moving asylum-seekers to the first of several new EU-funded "closed" camps on its islands, despite activists complaining that controls on access are too harsh.

A double barbed-wire fence surrounds the camp on Samos island, a facility for 3,000 people that also has surveillance cameras, X-ray scanners and magnetic doors.

During the migrant crisis in 2015 and 2016, the previous camp on Samos sheltered nearly 7,000 asylum-seekers despite being built to take just 680, and campaigners had long denounced conditions as deplorable.

"Today is a historic day ... a day of joy for us," Manos Logothetis of the Greek migration ministry told state TV ERT on Samos.

Logothetis told Agence France-Presse (AFP) that out of some 400 people at the current Vathy camp at Samos, 270 have said they want to move to the new Zervou facility.

At the entrance of the new camp, police lined up the residents, checking them for weapons or dangerous objects, an AFP reporter said. Asylum personnel handed out clean bedsheets and showed the migrants how to use the gate's magnetic entry cards. Some of the asylum-seekers carried boxes containing stray cats from the old camp, where rats were an ever-present menace.

"People are just angry for what will happen in the new camp, they think that it's prison, but I don't think it," said Didier Tcakonmer, a 28-year-old Cameroonian who has spent more than two years in Samos. "It will be better than here, no mosquitos, no rats."

The ministry is prepared to register up to 200 people today and the remainder on Tuesday, Logothetis said.

The Samos camp, which will serve as a pilot for the other so-called closed and controlled access facilities, can only be entered via fingerprint scans and electronic badges. Gates will remain closed at night and disciplinary measures await those who return after 8 p.m.

Late on Sunday, a fire broke out in an abandoned part of the Vathy camp – though the ministry said nobody was hurt. Logothetis told ERT it was common for asylum-seekers to sort through their belongings ahead of a camp move and burn anything they did not intend to bring with them. According to the ministry, all the asylum-seekers had been evacuated on Sunday to an empty space near the entrance of the camp as firefighters tackled the blaze.

The new Samos facility is the first of several such camps on five Greek islands created with EU funds.

The EU has committed 276 million euros ($326 million) for the new camps on Greece's five Aegean islands – Lesbos, Chios, Samos, Leros and Kos – that receive most of the migrant arrivals by sea from neighboring Turkey.

The Leros and Kos camps will open in November, the government said Monday.

The Samos community, which had for years demanded the relocation of all the migrants to mainland Greece and Europe, has also opposed the construction of the new Zervou camp.

On the nearby island of Lesbos, the similarly overcrowded camp of Moria was destroyed in two fires that left 13,000 without shelter for several days.