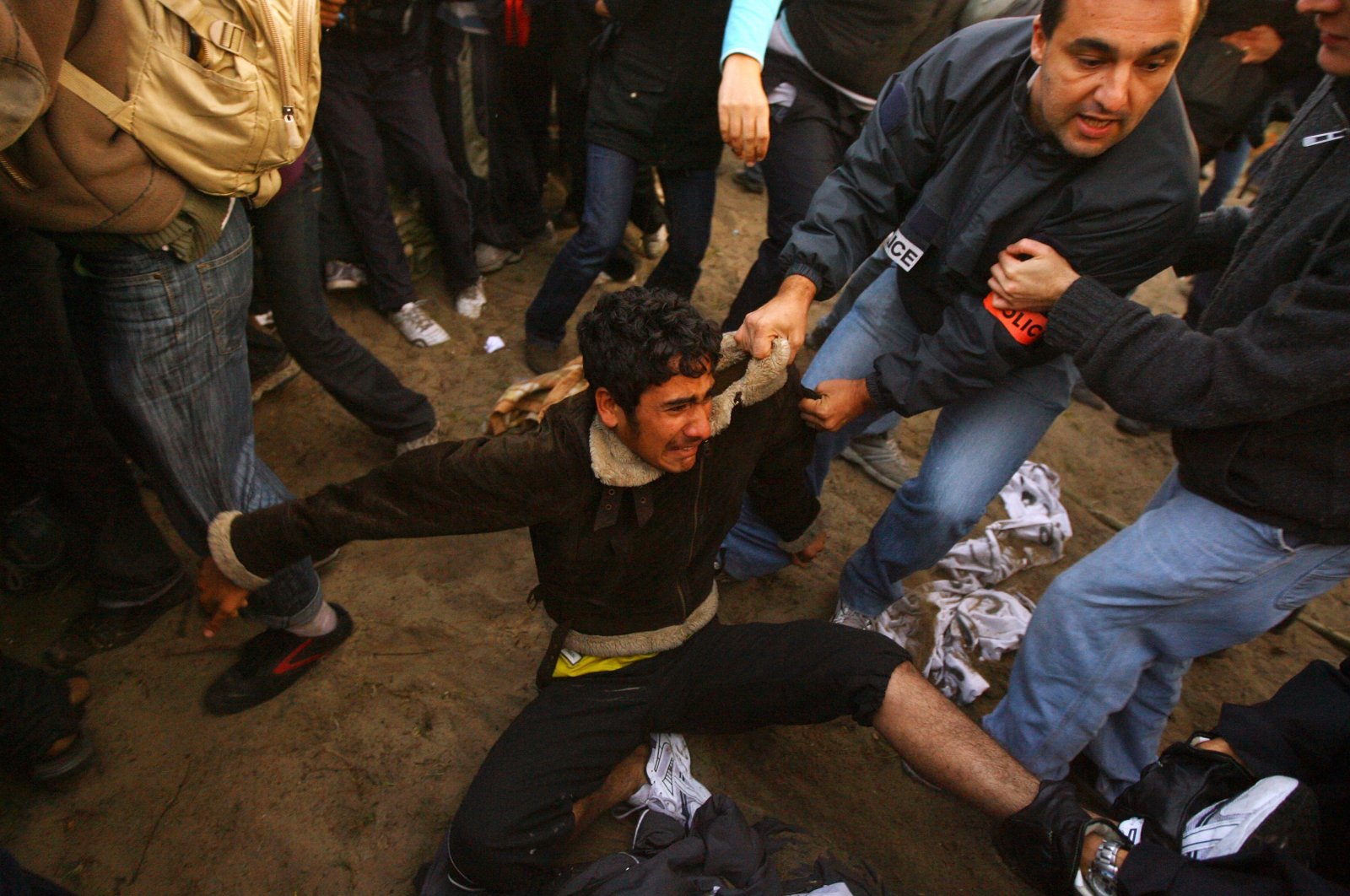 French police officers remove migrants and protesters from the makeshift migrant camp known as "The Jungle" adjacent to a ferry terminal to the U.K., in Calais, France, Sept. 22, 2009. (Getty Images)
by DAILY SABAH WITH AGENCIES
Oct 07, 2021 8:34 am

French police cause misery for migrants in the northern port of Calais, carrying mass eviction operations, destroying tents and seizing the limited belongings of asylum-seekers

French police are inflicting misery on migrants in the northern port of Calais, routinely tearing down their tents and forcing them to wander the streets as part of a deterrence policy, Human Rights Watch (HRW) said in a report Thursday.

The 75-page report documents methods used by authorities to prevent the emergence of another major migrant settlement in Calais, five years after the demolition of the sprawling "Jungle" camp that housed up to 10,000 people at its peak.

The report was based on interviews of more than 60 migrants, including 40 who identified themselves as unaccompanied children in and around Calais and nearby Grand Cinta commune from October to December 2020 and from June to July 2021. HRW also talked with officials from the prefecture and the child protection office for the Pas-de-Calais department, and the Grande-Synthe mayor’s office.

Calais has for years been a rallying point for migrants from the Middle East, Asia and Africa trying to cross the English Channel to Britain. But faced with growing public anti-migrant sentiment, President Emmanuel Macron's government has waged a campaign to prevent new camps from emerging.

The tactics used by the police to keep migrants at bay include systematically tearing down the tents they set up in the woods, on wasteland or under bridges, regularly confiscating their belongings and harassing nongovernmental organizations (NGOs) trying to provide them with aid, according to HRW.

"The authorities carry out these abusive practices with the primary purposes of forcing people to move elsewhere, without resolving their migration status or lack of housing, or of deterring new arrivals," it said, according to Reuters.

According to the report, police conducted nearly 1,000 forced eviction missions in Calais and at least 90 in Grande-Synthe last year. Security forces seized nearly 5,000 tents and tarps, while hundreds of sleeping bags and blankets were taken away from migrants. French authorities claim that mass evictions are "shelter" operations, however, they do not provide any shelter to migrants even for a couple of days. The HRW said no measures are taken to protect unaccompanied children, underlining that these "tactics leave children and adults constantly on alert and focused on their day-to-day survival."

Many migrants suffer from sleep deprivation and live “in a state of physical and mental exhaustion,” as the national ombudsperson’s office, the French Defender of Rights highlighted in September 2020.

NGOs estimate the number of migrants currently living along the northern French coast around Calais at between 1,500 and 2,000, including numerous families. Local authorities estimate that only 500 remain in the area. Last week, Interior Minister Gerald Darmanin ordered the eviction of a camp housing 400 migrants near a hospital in Calais, which was presented as a health and safety hazard.

On that occasion, the migrants were taken to temporary shelters – but often they are left to wander the streets as they search for a new place to sleep. The French government argues that the camps are havens for people smugglers, who command extortionate fees to help migrants cross to Britain, either in a small boat crossing the Channel in the dead of night or stowed away on a truck crossing by ferry or through the Channel Tunnel.

NGOs argue that the tactics do nothing more than make migrants' already difficult lives even more miserable. The report quoted the Calais-based Human Rights Observers (HRO) group as saying that in some cases cleaning crews cut migrants' tents while people are still inside in order to force them out.

“Subjecting people to daily harassment and humiliation is never justifiable,” Benedicte Jeannerod, France director at HRW, said. “If the aim is to discourage migrants from gathering in northern France, these policies are a manifest failure and result in serious harm.”

French authorities "need a new approach to help people, not repeatedly harass and abuse them," she added.

A total of 15,400 people attempted to cross the Channel in the first eight months of this year, an increase of 50% over the figure for the whole of 2020, according to French coast guard statistics.

French police officers systematically harassed volunteers with HRO, Utopia 56 and many other NGOs, the report said. The abusive treatment usually comes during eviction operations as NGOs observe how the police conduct their mission. According to HRW, volunteers and human rights advocates were falsely told on a number of occasions not to film police and were threatened with arrest.

These abuses contribute to containment policies whereby officials seek to eliminate or avoid anything they perceive to be attracting migrants to northern France or encouraging the establishment of camps. This approach ignores the fact that the real benefit is the proximity to the United Kingdom, 30 kilometers (18.6 miles) across the Strait of Dover. With the end of the Brexit transition, the United Kingdom can no longer send adult migrants back to France without first considering their claims for asylum.

"Exiles aren't traveling to northern France because they've heard they can camp in the woods or stay under a bridge ...They come because that's where the border is," Charlotte Kwantes, national coordinator of the Utopia 56 charity was quoted in the report as saying.

HRW has called on the prefects of Pas-de-Calais and Nord, the departments in which Calais and Grande Cinte are located, to stop evicting the migrants and to stop confiscating personal belongings. It also said that French authorities should make more efforts to provide information to unaccompanied children about their options, including joining the child protection system, which allows them to obtain legal status at the age of 18.

“French authorities should abandon their failed playbook toward migrants of the past five years,” Jeannerod said. “They need a new approach to help people, not repeatedly harass and abuse them.”

Earlier on Tuesday France announced its plans to reduce the number of visas issued to people in North Africa because it said governments there are refusing to take back migrants expelled from France. The move comes amid pressure from far-right politicians on centrist Macron to implement tougher immigration rules and creates new tensions between France and its North African neighbors.

Starting in a few weeks, the French government plans to slash the number of visas given to Algerians and Moroccans by half, and to Tunisians by 30%, according to government officials. All three countries were part of France's colonial empire, and many Europe-bound migrants and other visitors coming from those North African nations have family or other ties in France.

The French announcement comes as politicians on the right and far right are pushing for tougher immigration rules in advance of France's April presidential election. Macron is expected to announce a reelection bid.

Le Pen was Macron’s main rival in the 2017 election and is seen as his principal opponent if he runs again. "For a long, long, long, long time, I have been asking that steps be taken to oblige certain countries to respect international law,” she said, naming Algeria and Tunisia.

"I am pleased that the president of the republic heard me. I find it’s a bit late," she added according to The Associated Press (AP).

Le Pen was speaking in Paris at a press conference about her plans, if elected, for a referendum on her proposals for a "drastic reduction” of immigration to France.