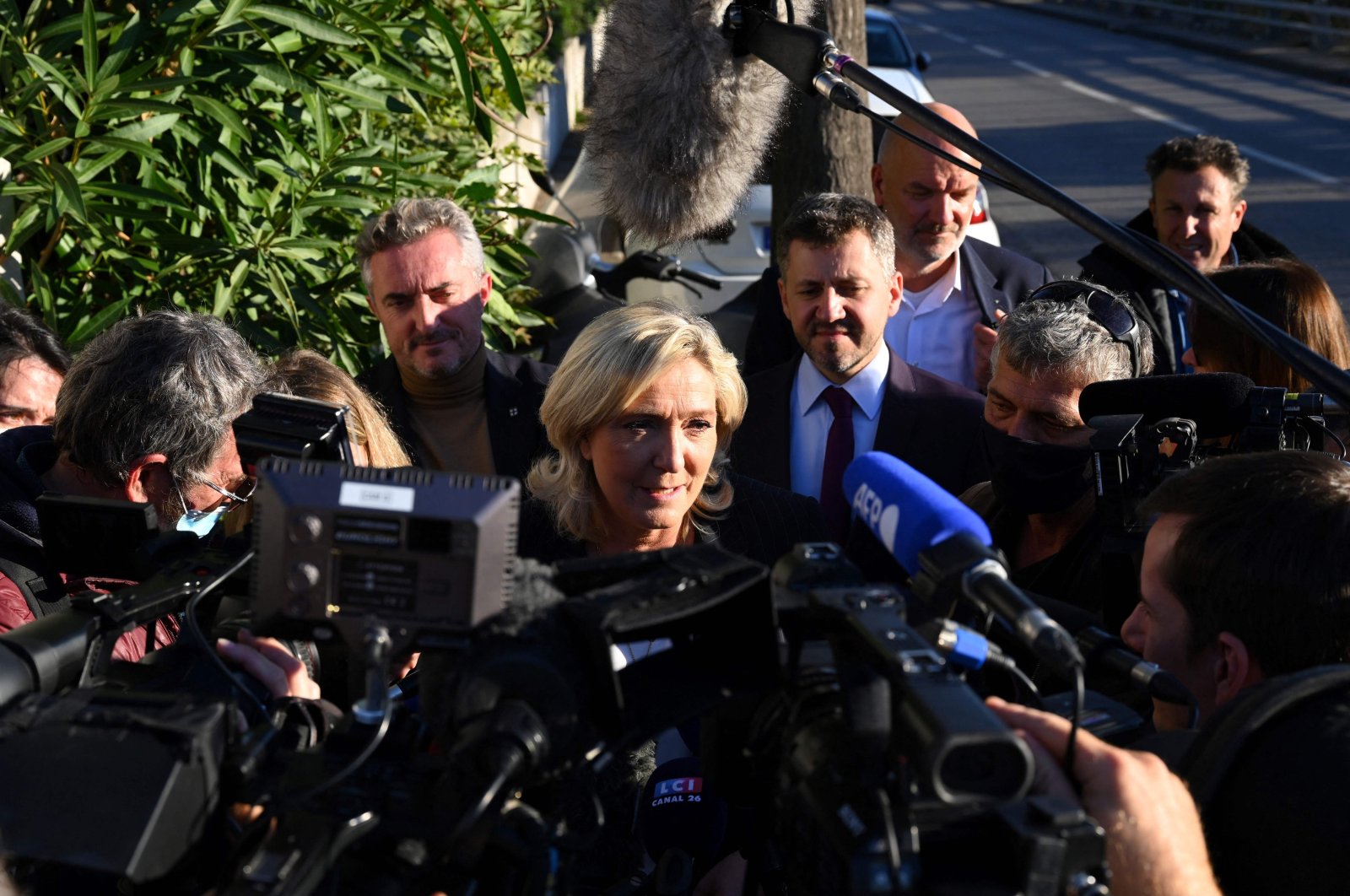 On a tour of a fine-food trade show, surrounded by cheese and truffles, French far-right leader Marine Le Pen admits that the start of campaigning for next year's presidential election has given her indigestion.

"It's been Zemmour for breakfast, lunch and dinner," she complained to Agence France-Presse (AFP) after more than an hour and half of sampling everything from throat-burning alcoholic liqueurs to duck-liver pate.

Eric Zemmour, a media pundit and best-selling author whose rhetoric on Muslims and immigrants is more extreme than Le Pen's, has made a dramatic entrance into French politics since September.

"It's been incredible. The way he has monopolized the media is absolutely extraordinary," she said during a weekend trip to the southern port of Marseille.

For the first time in early October, polls showed Le Pen failing to qualify for the second round of next April's polls, eclipsed by her new rival whose face was on TV screens and newspaper stands around the country.

"When you've got experience you have to let the dust settle and the dust is starting to settle," the 53-year-old said confidently, forecasting that Zemmour's support would be temporary while hers was permanent.

Three separate polls in the last 10 days indicate Zemmour, who has yet to officially declare his candidacy, is indeed losing steam.

Zemmour tweeted last Friday that he would hold a rally in Paris in early December, which associates told AFP could be the first public meeting of an officialised campaign. "The crossroads are here. On December 5, the next stage of the story begins at the Zenith in Paris. Come write it with me!" he wrote.

But the outcome of the duel remains uncertain and observers are unsure how it might effect the final result of an election which President Emmanuel Macron remains the favorite to win.

One possibility is that Le Pen and Zemmour eliminate each other by splitting the far-right vote in the first round on April 10.

The latest tracker poll last Thursday by OpinionWay showed Macron on top with 24% to 25%, Le Pen comfortably in second with 19%-21% percent, with Zemmour trailing at 12%.

Under France's electoral system, the two candidates who get the most votes in the first round advance to a run-off ballot.

Le Pen is convinced that Zemmour will expand the far-right nationalist vote for the second round by attracting traditional right-wing voters who are angry about immigration and crime, as well as abstentionists.

"For the people who've supported Zemmour's candidacy, it will be much easier for this electorate to switch to me," she explained, adding that Zemmour "might end up being a stroke of luck."

Success in what is her third tilt for one of Europe's most powerful political offices would send shockwaves across the continent.

Zemmour has already helped Le Pen with one of her main goals since she took over the National Front (FN) party, now known as the National Rally (RN), from her father Jean-Marie Le Pen in 2011.

The divorced mother-of-three has been desperate to portray herself as a more moderate figure and has excluded overt racists and anti-Semites – including her father – from her movement.

"Every day he creates even more divisions," she added. "To lead a country, you can't divide it both systematically and completely pointlessly."

Zemmour, who has two convictions for hate speech, hopes fed up voters will prefer his more radical views that Islam is "incompatible" with France and his image as an outsider untainted by professional politics.

He recently proposed outlawing the use of foreign first names such as Mohammed or Kevin.

And as governments across Europe are reintroducing restrictions on movement to curb a fifth wave of the pandemic, Zemmour said Monday that fears about the coronavirus had been overblown.

"We need to put this epidemic back in the right proportion. We have played a lot on people's fears. We have gone too far, and we've been going too far since the beginning," Zemmour told France Info radio.

"One doesn't win from the center any more," Zemmour told Le Pen in a meeting earlier this year, according to his latest book. "People expect firmness and conviction, even radicalism."

Le Pen, who compared Muslims praying in the streets to the Nazi occupation in 2010, polices her language much more carefully nowadays.

She's also watered down her policies on the European Union, which she no longer wants to leave, preferring instead to "change it from the inside."

But despite her optimism, Le Pen faces challenges beyond simply outshining Zemmour in the battle for the soul of the far-right.

Not a single poll has shown her beating Macron during his four-and-a-half years in power, and surveys indicate voters remain worried above all by the economy and their livelihoods, rather than immigration.

French banks also remain unwilling to lend to her party, creating a financial squeeze that means she is restricted to relatively low-profile events like the visit to Marseille.

And nearly five years on, Le Pen is still carrying the scars of her last failed run for the presidency.

Several people who stopped for selfies with her at a market in the Plans-de-Coques area north of Marseille spontaneously mentioned her embarrassing failure in a head-to-head debate with Macron during interviews with AFP afterwards.

Le Pen says she has learned from the episode, which badly undermined her credibility.

"I've explained myself to the French people, I said 'I made a mistake, a strategic mistake'. It happens," she said.