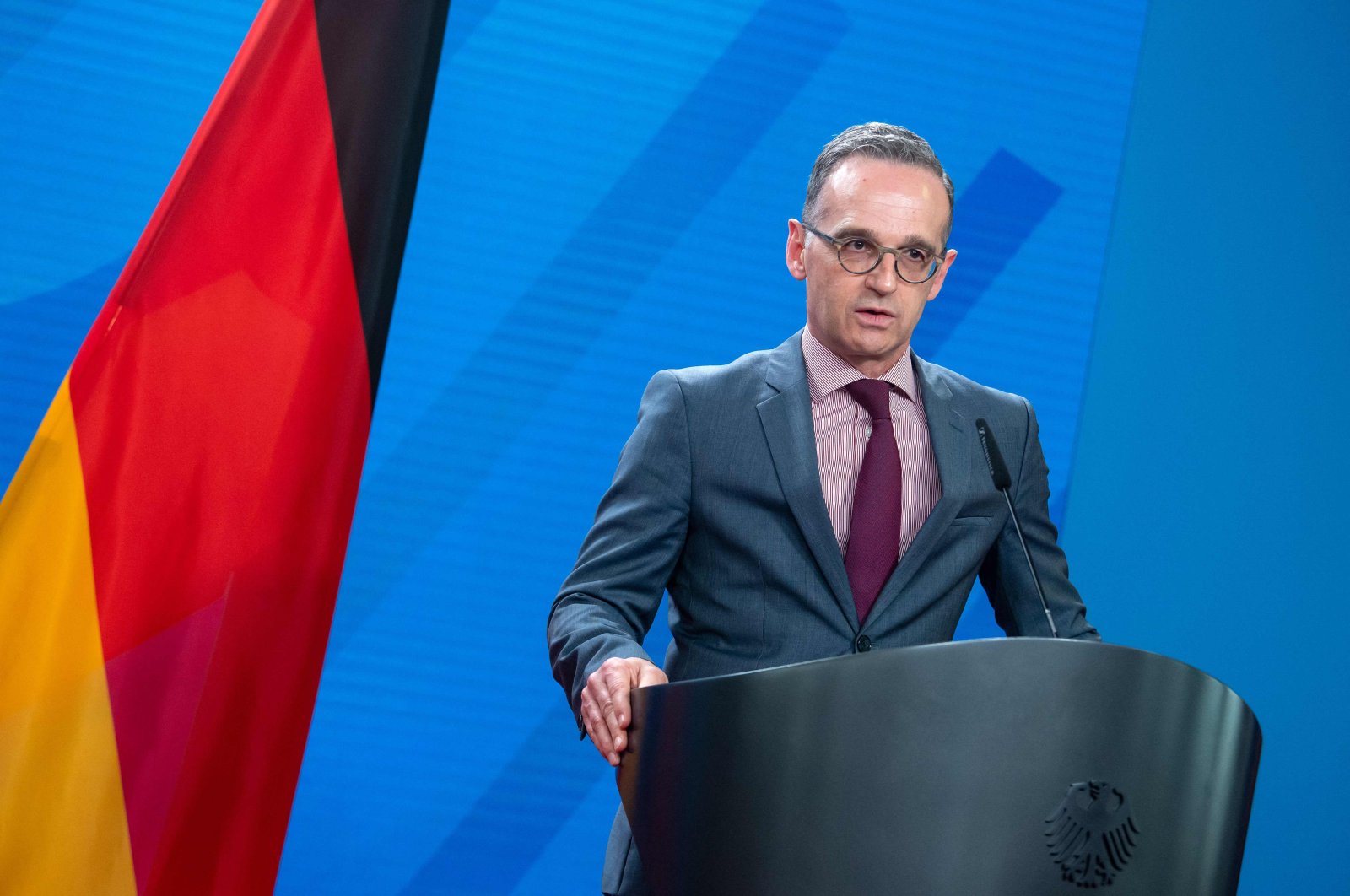 German Foreign Minister Heiko Maas attends a joint press conference with the Czech foreign minister ahead of a meeting at the Foreign Ministry, Berlin, Germany, May 25, 2021. (AFP Photo)
by Agencies May 25, 2021 6:22 pm
RECOMMENDED

German Foreign Minister Heiko Maas on Tuesday said Belarusian President Alexander Lukashenko will pay "a bitter price" for the "heinous" flight diversion that led to the arrest of a dissident on board.

"Any dictator toying with such ideas must be made to understood that they will pay a bitter price," Maas told reporters in Berlin, a day after European Union leaders agreed to cut Europe's air links with Belarus and impose further economic sanctions. "Our goal has always been to hit Lukashenko and his power apparatus with these measures, not the civilian population," he added, according to remarks carried by Reuters.

The comments came after the EU had agreed to impose new sanctions on Belarusian officials after Lukashenko sparked international outrage by dispatching a fighter jet Sunday to intercept a Ryanair flight from Athens to Vilnius carrying journalist Roman Protasevich, 26, and his partner Sofia Sapega.

German Chancellor Angela Merkel said Tuesday, the decision by Belarus to force down a jetliner and arrest a journalist who was on board is unprecedented and unacceptable, demanding that the dissident be released immediately.

"We discussed this issue very intensively and we all agreed it was an unprecedented and unacceptable act," Merkel said after an EU summit in Brussels. "It was a forced landing that put people in danger and led to the arrest of the journalist Roman Protasevich and his partner. We ask Belarus to release both immediately."

The United Nations also demanded the immediate release of Protasevich, saying their "abduction" was an abuse of state power, as reported by Agence France-Presse (AFP).

"We call for the immediate release of both Roman Protasevich and Sofia Sapega, both of whom should be allowed to continue to their intended destination in Lithuania," U.N. rights office spokesperson Rupert Colville told reporters in Geneva on Teusday. "We are shocked by the unlawful arrest and arbitrary detention," he said.

Protasevich was a co-founder of the Nexta Telegram channel, which helped organize opposition protests against Lukashenko's disputed reelection to a sixth term last August. Belarusian authorities' have long brutally cracked down on opponents and protesters, but the extraordinary diversion of an airliner to arrest a dissident onboard sparked global shock.

The plane was forcibly diverted to the Belarusian capital, "apparently under false pretences" with the express purpose of capturing Protasevich, Colville said. "The manner, through threat of military force, in which Protasevich was abducted from the jurisdiction of another state and brought within that of Belarus was tantamount to an extraordinary rendition.

"Such abuse of state power against a journalist for exercising functions that are protected under international law is receiving, and deserves, the strongest condemnation."

Colville said the Office of the U.N. High Commissioner for Human Rights feared for Protasevich's safety and sought assurances that he was being treated humanely and not subjected to ill treatment or torture. He voiced particular concern at a video showing Protasevich "confessing to having organised mass unrest" in Minsk.

"His appearance on state TV last night was not reassuring, given the apparent bruising to his face, and the strong likelihood that his appearance was not voluntary, and his 'confession' to serious crimes was forced," said Colville.

He said information obtained under coercion could not be used against Protasevich in any legal proceedings, under the Convention against Torture.

Colville said the penalisation of a journalist solely for being critical of the government violated the International Covenant on Civil and Political Rights.

Furthermore aeroplanes were under the jurisdiction of the country of registration, Coleville said.

"The fact that the plane was flying over Belarusian territory is not relevant to the state's abilities to do what it did," he said.

Ryanair is an Irish airline and Irish Foreign Minister Simon Coveney said Monday that the plane was registered in Poland. Colville said there were "a lot of different ways of referring to this: an abduction, extraordinary rendition and possibly even a state-sponsored hijacking."

The forced landing "terrorized passengers on board and exposed them to unnecessary danger, in violation of their human rights," he added.

"This astonishing episode constitutes a new phase in the Belarusian authorities' campaign of repression against journalists and civil society," he said. "This arbitrary arrest is a sign of an extremely worrying escalation in the crackdown of dissenting voices."

Citing nongovernmental organizations (NGO) numbers, Colville said that some 405 people were being detained on politically-motivated grounds in Belarus as of Monday.