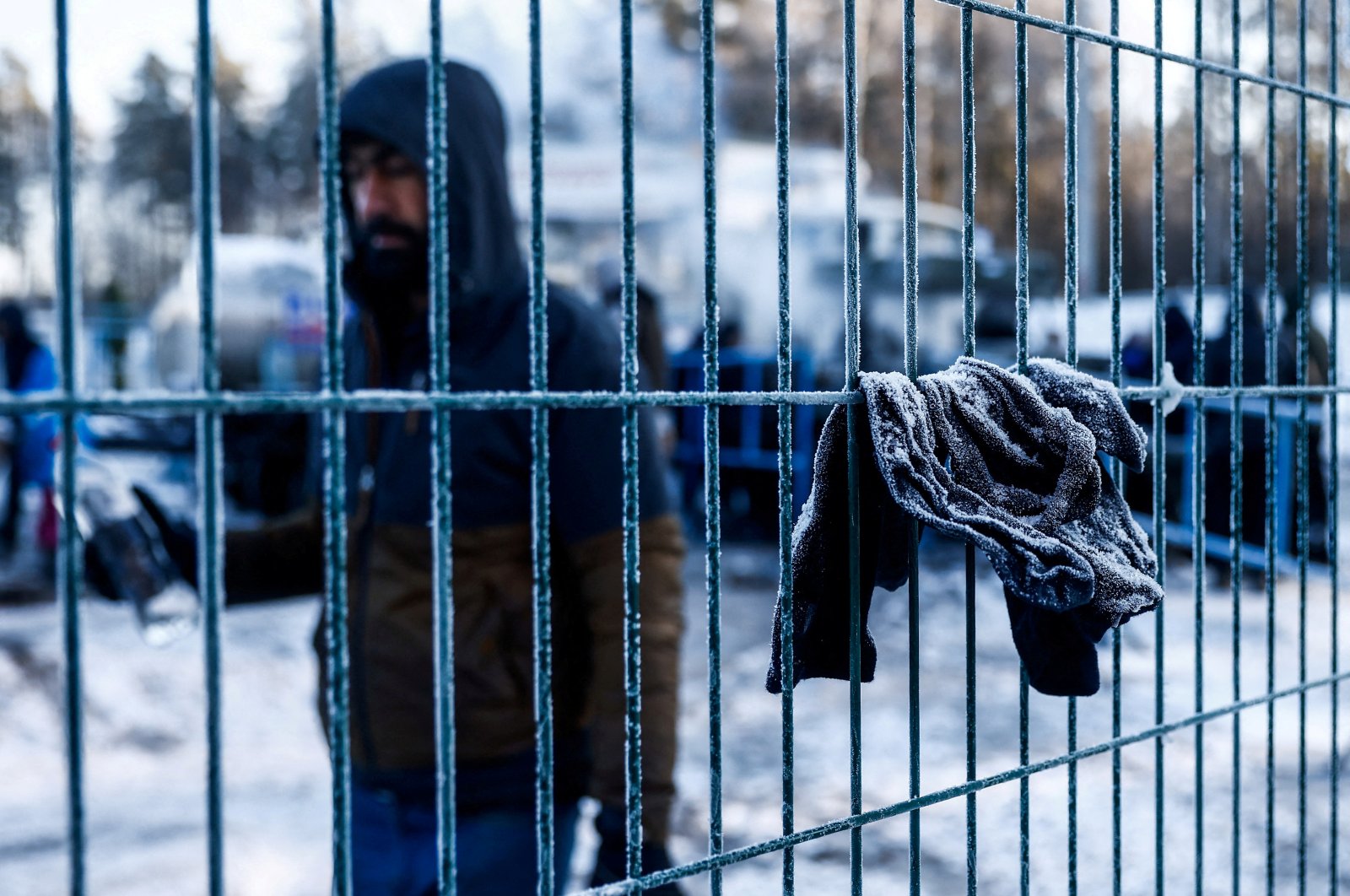 A migrant walks past frozen clothings hanging on a fence outside the transport and logistics centre Bruzgi on the Belarusian-Polish border, in the Grodno region, Belarus December 22, 2021. (Reuters Photo)
by ASSOCIATED PRESS Dec 28, 2021 11:07 am
RECOMMENDED

On a sunny but freezing morning in a forested area of Belarus at the border with Poland, hundreds of migrants line up to receive hot food and water.

They have been stuck here for over a month in the hopes of entering the European Union. Despite several failed attempts to storm the frontier amid the frigid temperatures, many still hope they will be allowed in.

"I don’t want to stay in Iraq because life there is difficult, even our life is dangerous. Our life there isn’t safe as you see about ISIS and everything else,” Iraqi migrant Ahmad Rebaz, 27, told The Associated Press (AP), using another acronym for the Daesh terrorist group. He said his wife had recently given birth to their second child in the nearby Belarusian city of Grodno.

Since Nov. 8, a large group of migrants have been stranded in Belarus at a border crossing with Poland. Most of the migrants are fleeing conflict or hopelessness at home, and aim to reach Germany or other Western European countries.

The EU has accused Belarusian President Alexander Lukashenko of waging a "hybrid attack” against the bloc. Officials say he is luring thousands of migrants to Belarus with the promise of help to get to Western Europe to use them as pawns to destabilize the 27-nation EU in retaliation for its sanctions on his authoritarian government. Belarus has denied engineering the crisis.

About 600 migrants, according to the Belarusian Red Cross, are living at the Bruzgi logistics center as of late December. It is a warehouse facility where they have set up a makeshift camp, placing mattresses and tents in the rows that once housed shipping containers. Belarusian authorities and the Belarusian Red Cross have provided them with food and other necessary supplies.

Poland took a tough stance against the migrants’ illegal entry, reinforcing the border and pushing those attempting to get in back into Belarus. The Polish approach was largely met with approval from other EU nations, who want to stop another wave of migration, but has also been criticized by human rights groups.

Belarusian authorities have also criticized Poland and other European nations for mistreatment of the migrants, while pointing to their own efforts to return them to their home countries and to create decent living conditions for those staying at the border crossing at Bruzgi.

But as temperatures fall below freezing point, life at the border becomes more and more challenging. In the heated warehouse, it’s still so cold that people inside are keeping their outerwear on.

The migrants "need immediate help because the weather is getting more and more cold,” said Zanyar Dlshad, an 18-year-old from Iraq living at the logistics center who hopes to make it to Europe to reunite with his brother and to study at a university.

"It’s so cold and I don’t believe people can keep up with this,” he said.

While most migrants say they want to travel on to Germany, some say they are willing to settle in any country to avoid having to return to Iraq.

"If Belarus, Russia, Poland, Lithuania, or any other country gives us citizenship I’ll accept. For me, there’s no difference. But (I’ll) never ever come back to Iraq,” said Farhad Mahamad, a 34-year-old migrant.

Several hundred Iraqi migrants have already left Belarus on evacuation flights organized by the Iraqi government, and more are beginning to agree to return home with the help of the United Nation’s International Organization for Migration (IOM).

Last Wednesday, about 10 people at the Bruzgi logistics center filed documents to the IOM representatives on-site to arrange their return to Iraq.

Mohamed Refaat, senior operations coordinator of the IOM, told AP that they would be taken to the Belarusian capital, Minsk, by bus before continuing their travel to their home countries.

The site of dramatic clashes between Polish border guards and migrants at the Kuznica-Bruzgi border crossing, in the meantime, is empty of the crowds of people that gathered here last month.

However, some migrants say that they aren’t willing to wait at the warehouse much longer and are ready to brave the cold temperatures of what they call "the jungle” – the forested areas at the border – with the hope of finally making it through to Poland.