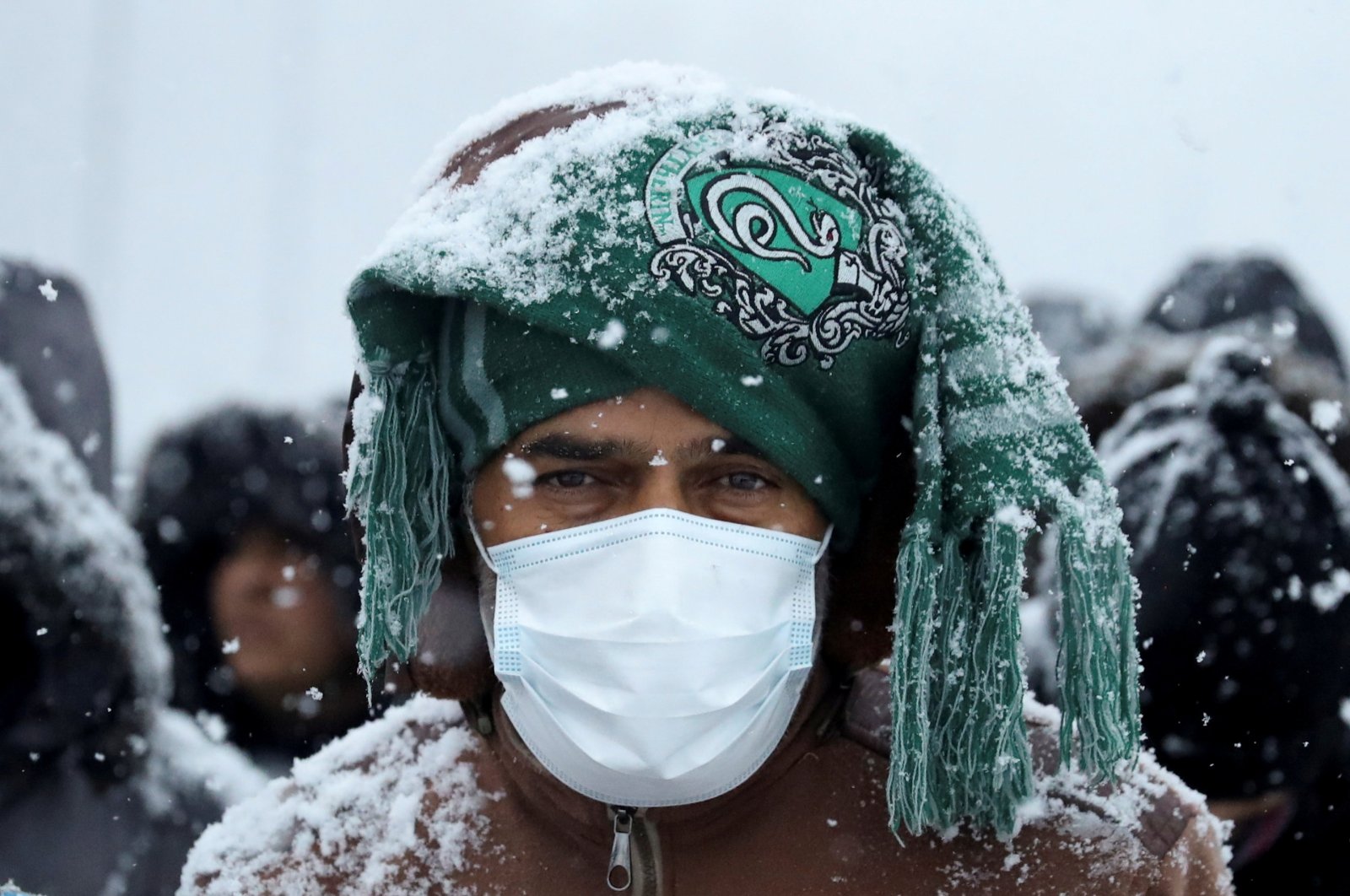 Migrants gather at a transport and logistics center during snowfall, near the Belarusian-Polish border, in the Grodno region, Belarus, Nov. 23, 2021. (Reuters Photo)
by Agencies Nov 24, 2021 9:44 am

The prominent human rights organization accuses Belarus border guards of 'violence, inhuman and degrading treatment' against migrants stuck at the crossing point with Poland, urging the rival sides to stop the 'ping-pong' pushbacks

Belarusian border guards may be guilty of torture against migrants on the country's border with Poland, Human Rights Watch (HRW) said Wednesday, adding that both nations have committed "serious human rights violations."

The group said in a report that the two governments "have an obligation to prevent further deaths by ensuring regular humanitarian access to the people stuck in the border area."

HRW researchers said they had conducted in-depth interviews with 19 people, some of whom "had been pushed back, sometimes violently, by Polish border guards."

They said these pushbacks "violate the right to asylum under EU law" and urged the EU to "start showing solidarity with the victims at the border on both sides who are suffering and dying."

In Belarus, they said that "violence, inhuman and degrading treatment and coercion" by Belarusian border guards were "commonplace."

HRW added that this treatment "may in some cases constitute torture, in violation of Belarus's international legal obligations."

The European Union and the United States have accused Belarus of engineering the crisis in retaliation for EU sanctions on President Alexander Lukashenko, who has crushed the opposition and independent media during his nearly three decades in power.

Lukashenko has told the BBC that Belarusian border guards "maybe" helped the migrants cross, but denied bringing them to Belarus and urged the EU to take them in. Belarus estimates there are around 7,000 migrants in the country.

"While Belarus manufactured this situation without regard for human consequences, Poland shares responsibility for the acute suffering in the border area," Lydia Gall, senior Europe and Central Asia researcher at HRW, said in a statement.

The report also said that three people had accused Polish border guards of separating their families, including parents from children, by taking those in need of medical care to the hospital while sending the other family members back to Belarus. It urged Belarus and Poland to "halt ping-pong pushbacks and allow independent observers, including journalists and human rights workers, access to currently restricted border areas."

The Polish Border Guard agency has since September reported about 10 deaths, but they don't identify them. Meanwhile, humanitarian groups and Polish media have reported more cases but it's difficult to verify those deaths.

On Tuesday, a Polish imam recited prayers over the tiny white casket of an unborn Iraqi boy, the latest life claimed as migrants from have tried to slip into the EU and found their path blocked by soldiers in the forests of Poland and Belarus.

After the first snow of the season fell overnight, Aleksander Ali Bazarewicz, the imam, waited in hopes that the child's father – in a refugee center and with his wife hospitalized in serious condition – would arrive. When he didn't appear, Bazarewicz lead the funeral rites in front of an old wooden mosque and later at the graveside.

"Another victim,” said Bazarewicz, who led prayers for the first victim of the migration to be buried in the same cemetery, a 19-year-old Syrian refugee, nine days ago. "We thought this would only happen once but now this sector gets bigger and bigger,” he said, standing among four simple burial mounds, each surrounded by stones and covered with pine branches.

All four now rest together on the edge of Poland’s largest Muslim cemetery, which belongs to a community of Tatars who have lived in Poland's eastern forests for centuries.

"They will rest among their Tatar brothers,” he said.

There is no exact toll among the migrants and refugees who since the summer have traveled to Belarus and then sought to cross into Poland, Lithuania or Latvia, the three countries bordering the EU.

There also have been migrant deaths on the Belarusian side, with bodies returned to Iraq for burial, but the Minsk authorities haven't reported how many. A man who appeared to be a migrant from Africa was buried Monday in the Catholic cemetery of Sokolka, not far from the Muslim cemetery in Bohoniki, because a Bible was found next to his body. But since there was no certainty that he was Christian, the local priest didn't preside and all those attending the burial were journalists.

Polish media have also reported the death of a 24-year-old Syrian Christian man whom they identified as Issa Jerjos.

Bazarewicz led the rites for a family he had never met, admitting he knew little more than the mother miscarried in her 27th week of pregnancy and that the family had five children. He called in two Muslims, both Chechen immigrants, to assist with the funeral, attended otherwise only by about three dozen journalists.

Bazarewicz says it's his duty as a Muslim to ensure that other Muslims who have perished on Polish soil far from their homelands be buried with the proper religious rites. In Islam, a fetus after four months is considered a human being and buried as one, he explained.

The lace-trimmed casket of the unborn infant – given the name Halikari Dhaker and whose date of death is Nov. 14 – was so small it was carried to the grave by a single man before it was lowered with ropes.

"These people have left their countries, not to travel around or see beautiful places, though Poland is beautiful, but to find a better life," he said. "They were manipulated and they’ve suffered – which is not their fault.”

A top EU official said Tuesday that the 27-nation bloc will impose sanctions on Belarus' airline and on international firms involved in migrant trafficking. The sanctions package will be approved by member states in the coming days, but European Council chief Charles Michel and European Commission President Ursula von der Leyen revealed details to members of the European Parliament.

She said her commission would draw up a sanctions "blacklist" of travel and transport firms involved in trafficking migrants into the bloc, for approval by parliament and member states.

"We propose rules to blacklist all means and modes of transport involved in trafficking in persons and smuggling of migrants," she said, adding that the measures would be coordinated with Britain, Canada and the United States.

Also addressing the members, Michel said that Belarus airline Belavia, which leases most of its planes from firms in EU member states, notably Ireland, would be targeted.

"We will not allow the Belarus regime to intimidate us and to undermine our values and our unity," he said, giving only "one example" of the sanctions on their way. "The majority of the fleet of Belavia are aircraft leased from EU companies, this will be halted when the decision is taken, which is imminent," he added.

Adina Valean, EU commissioner for transport, told reporters that a transport operator or travel agent could be listed for up to a year, and that this could be renewed if necessary.

"Those operators found to be in breach of the rules may have their right to operate in the EU suspended or limited, may be denied the right to fly over the EU, to call at EU ports or make technical stops within the EU or they may be banned from transiting throughout our territory," she said.

Several Middle Eastern airlines have already halted or reduced flights to Minsk since Brussels complained that migrants were being lured to Belarus with false promises of a route into EU member Poland.

"Lukashenko wanted to put pressure on us, in order to make us to cancel the sanctions," EU foreign policy chief Josep Borrell said. "I think that he has missed the game because what he has got is a new round of sanctions. And now he will have to contribute and to take care of these people who are on his territory in order to give them dignified treatment."

The migrants say they want to get to Germany via Poland and Lukashenko has said that he is ready to send them there by plane if necessary, while accusing Brussels of refusing to negotiate their fate.